The Ace of Clubs

After a scrape with the law, Terry Barbu unveils his latest pleasure dome. 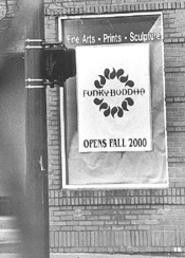 With a passion for art and the ability to convince investors to part with their money, Terry Barbu has risen from bartender to club impresario. He is the creative force behind Trilogy, Liquid Café, Spy, and Fishbones Beer Farm. Cleveland magazine called Barbu "Mr. Nightlife" in a fawning profile.

In August, Mr. Nightlife woke up to the cruel morning. Barbu stood in a Cuyahoga County court and pleaded no contest to the misdemeanor charge of unauthorized use of property. The conviction stems from events two summers ago, when Barbu was renovating Liquid and building Wish. Assistant Prosecutor Mark Mahoney says Barbu furnished Liquid with lumber, ice machines, coolers, bar stools, and labor bought by Wish.

Problem is, while Barbu may have had a stake in both clubs, the principal investors were separate. A judge put Barbu on nine months' probation and ordered him to reimburse Wish $39,387.

One former employee was not surprised to hear that Barbu's deals were in question. "Do I feel it's within Terry's character to have done these things at the time? I would say yes," says Jeff Allison, who managed Spy before opening the Mercury Lounge. "I wish I couldn't say that. It breaks my heart to say it."

Even Barbu's supporters say his ambitions can get the better of him. His attorney, John Shepherd, says Barbu was "a little bit naive" in operating the clubs as if they were a cooperative. "He tried his best to do his best for all of them."

Barbu says he was trying to cut a good deal for both clubs, and he agreed to the plea because he wanted to avoid a long court fight. "In no way did I think what I was doing was criminal," he says.

"I truly am an artist, not an accountant."

Barbu maintains Wish's investors -- Anthony and Michael Della Vella -- knew what he was doing, and they owe him money for his part of the bar (reportedly $25,000). The criminal investigation, he believes, was an effort to sabotage his latest creation, Funky Buddha. A week before Funky Buddha opened, Cleveland media received the court record of Barbu's plea via anonymous mail packets. "Their big goal was to stop me from doing this," Barbu says.

Funky Buddha is his most ambitious project yet. Investors have pledged $1 million to turn 10,000 square feet on West Ninth Street -- where Brenda Kroos Gallery and Wilbert's used to be -- into an Asian-themed dance club. Little expense has been spared on Funky Buddha: Couples can nuzzle on silk-covered couches; an $800 price tag dangles from the leg of an antique table; the velvet drapes alone cost $27,000. "I try to design such a 'wow' factor that you have to go see this place," Barbu says.

It's obvious whoever sent the packets found the idea of Barbu-as-thief appealing. Jason Hallaman, operations manager at Sushi Rock, a restaurant Barbu designed, thinks Barbu makes for an easy target because he is ubiquitous in the Warehouse District. "No one says anything bad about [Rock Hall architect] I.M. Pei because he doesn't live around the corner," he says.

Allison thinks a shot of humility might serve his former boss well. "I think he's learned his lesson. Deep down, I think a lot of people want Terry to do well."

Standing on the second floor of Funky Buddha, Barbu watches workmen raise his vision from sawdust to glitter. If only for a moment, he realizes the illusory nature of his work. "Nightclubs come and go," he says. "Five years from now, this will be something else. How do I make this the best place? I make this the new place."