The Acts of the Apostles

After the death of demanding bandleader Sun Ra, Marshall Allen tries to carry the legacy. 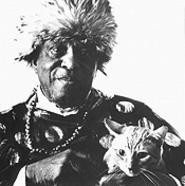 Death comes even for the greatest of bandleaders. But sometimes, when in life a leader's charisma shines so brightly and his mark becomes so deeply etched, the decapitated outfit carries on after he passes. They become ghost bands, devoted to their leader's sound and vision. The Basie band still tours, the Charlie Mingus big band keeps a regular engagement in Manhattan, and the indomitable Ellington orchestra continued with son Mercer after the death of the Duke. But for any of these bands, deciding to go on meant muddling along without the man who made them—the man who might have been a father figure to them, who might have written much of their music, and who certainly gave the band shape and focus and pushed them to their best performances.

On May 30, 1993, when Sun Ra finally departed for the cosmos, the members of Ra's Arkestra were left considerably poorer than any other ghost band. They not only lost their superlative band leader, they lost their alternative historian, resident cabalist, philosopher, poet, lecturer, instrument buyer, costumer, set designer, and spiritual adviser.

Sun Ra performed all those roles and more for the Arkestra over the years. His fierce idiosyncrasy, scholarship, and aesthetic made the Arkestra a completely singular entity and his stage shows like no other. It also made him a tough act to follow. Nevertheless, at least in the area of keeping the Arkestra together and touring, Marshall Allen has been quietly doing just that for years.

To many, taking over the helm of the Sun Ra orchestra may not seem remotely conceivable, but by the time the decision had presented itself, Allen had devoted himself to Ra for 35 years. He'd contributed to hundreds of Ra recordings as a reed man, Jupiter flautist, astro-space drum player, and player of other instruments, both worldly and extraterrestrial. It became a way of life for him. But it was never easy. Ra challenged just about everyone all the time, as Allen discovered even on the very first day he met the man from space.

When he was a young musician in Chicago, Allen heard a demo with Sun Ra's band on it, and then later discovered that the band resided in Chicago and often took in new musicians. One day after work, with instrument in tow, Allen set out to find Ra. "I knew some of the musicians where he was, rehearsing over at the ballroom," Allen says. "So I went over there, talked to him, and told him I wanted to join the band. I was ready to jump up and play, but he talked, talked, talked. At about four o'clock in the morning, still talking. He still didn't let me know if I was gonna be in or nothin'. It went on for days like that."

Eventually, Ra slipped Allen into the band. But as he soon found out, the lecture was no anomaly. Ra hardly conformed to the image of a typical bandleader. Living life with magnifying glasses for eyes, the scholarly Ra concerned himself only with that which interested him—music, history, black mysticism, wordplay, the cosmos—and ignored the rest. He devoted himself to these pursuits and expected the same devotion from his musicians. His erratic behavior could be off-putting, and beyond that, any musician who threw in his lot with Ra had to live with his prohibition of drugs, alcohol, and women (especially white women). Not surprisingly, more than a few musicians quit over the years. Only Allen and a few other stalwarts hung with Ra for the duration.

"He demanded—always demanded something," Allen says. "He was a person who knew people and knew the potential in them. He'd study you and learn what you liked and what you disliked, and he'd always give you some of what you liked and some of what you didn't like. [Ra was] a master at music who came along in my personal life, and I had a chance to not drop it. Unlike a lot of things in life, I just stayed with it."

As irritating as it might have been, Ra's methods forced his musicians to play their own music without imitating the prominent musicians of the day. There already was a Max Roach, and there already was a Sonny Rollins—Ra had no patience for a band full of mynah birds. He sought a different sound, constructed from his self-formulated musical theory and fleshed with space chords and pedal tones.

"It all comes through the spirit of playing—not you and your knowledge, but the spirit of something," Allen says. "You ask him, "What's that?' You'd put your best foot forward and try to play what you'd learned, and he'd say, "No, I don't want that.' He wanted the spirit—not just playing a note, but playing a note a different way."

The performances became famous. Light shows, tinfoil, flowing robes. Dancers jumped from stages into aisles as jabbing chords from Sun Ra's electronic keyboards punctured the air. Fiery solos followed blasts of pure sound, which were in turn followed by chanting and marching. The repertoire was equally bizarre—everything from Fletcher Henderson stomps (Sun Ra played piano and arranged for Henderson for a time) to harmonically sophisticated big-band arrangements, from Sun Ra-brand free-jazz blowouts to Disney tunes. Considering the sheer semiotic density of a Sun Ra recording, let alone live appearance, it's surprising that anyone would feel up to carrying on the vision.

Allen gets by with a more humble approach. Just as editor John F. Callahan chose to deliver the slim Juneteenth, rather than attempt to finish Ralph W. Ellison's sprawling, polyvocal, novel-in-progress, Allen carries on with years of Ra's teachings in mind, with the Ra charts he knows so well, and by focusing on a small part of the Ra legacy.

"I didn't plan on [doing this]," he says. "But it was there, so I just stepped up. Now I'm trying to produce in the position that I'm in by carrying the band on, doing some writing, and seeing that the guys play it with a certain spirit. There are so many dimensions to the band; I just chose to use the swinging one. Not so much the outer space thing as just swinging, the feel of it. I just write some more music, add to the Sun Ra feeling, and just swing along."