The Art of Game Hunting 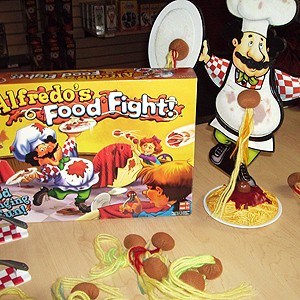 Board- and card-game fans can build up their collections today at I'm Game's first auction. "You probably have some games in your cupboard," says Wendy Kerschner, who co-owns the store with husband Michael. "You've probably played them a bunch of times, and now you're getting tired of them." Kerschner suggests donating your old games to the auction, then checking out what other people are selling. "You can buy great games at garage-sale prices," she says.

Bidding starts at a mere buck a game. Shoppers bid up the prices till offers shut down at 5 p.m. Buyers take home their finds; sellers are given store credit. "Maybe there's an old game you want, and you'll say, 'Oh my gosh! I remember that from my childhood,'" says Kerschner. "If there's some obscure game you can't find anymore, we may already have it for you."

The Kerschners opened the store in October to sell lesser-known games like Rush Hour and Fluxx next to classics like Monopoly, Risk, and Clue. They also stage weekly leagues and tournaments for Pokémon and Dungeons & Dragons players.

On Mondays, experts show novices how to master tougher games, like the German-made Settlers of Catan, in which players build a colony on a deserted island. "A lot of people don't like the old board games, because of the boring wait until it's finally your turn," says Kerschner. "Many new games can be done in an hour — unlike Monopoly, which can go on and on and on. They're fast-moving, and everyone has a lot of fun in a reasonable amount of time." Besides, she adds, there are games out there that can keep the whole family happy. "Before your child tortures you with Candyland again," she says, "let us recommend something that you'll probably love playing a lot more."
Sat., June 10, 12-6 p.m.