Heavy metal loses its clown prince when Pantera's cutup is cut down. 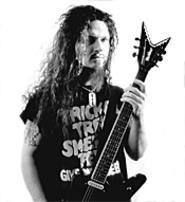 In the early '90s, when heavy metal desperately needed a Marx brother, it got two of them instead: Pantera's Vinnie Paul and "Dimebag" Darrell Abbott, a pair of randy Texans with Beavis and Butt-head grins and a shared love for making people vomit. As the founders of Pantera -- which went from being a hair-metal band with tunes like "Pussy Tight" to a tongue-in-cheek thrash band whose theme song was "Cowboys From Hell" to the leading act in metal on the 1992 album Vulgar Display of Power -- the Abbott brothers brought slapstick to a genre that was often about as fun as an audit.

Dimebag was the real cutup. In Pantera's notorious home videos, he was regularly seen paying crew members to chug bottles of salad dressing or hot sauce -- anything gag-inducing -- then delighting when they failed to complete the task without puking. He'd tape himself setting friends on fire while they slept, putting live crawdads in their beds, and shaving off his bodyguard's eyebrows.

And so it's something of a shock that anyone could develop the kind of grudge against Dimebag that would lead a man to storm the stage of a Columbus concert club last week and shoot to death the most popular guitarist in metal and three other men during a performance by Damageplan, the Abbott brothers' post-Pantera outfit.

Not only does Dimebag's passing end that band and slam the door on a Pantera reunion (which, despite all the tough talk from the Abbotts and former Pantera frontman Phil Anselmo, seemed inevitable; both Damageplan and Anselmo's current project, Superjoint Ritual, have failed to catch fire), it strips metal of a lot of shit-faced shenanigans as well. In a genre where masculinity is as essential as Marshall stacks, where dudes wear the stern look of a junior-high bully on the prowl for your milk money, Dimebag was unafraid to don high heels and make an ass of himself on a nightly basis.

And his timing couldn't have been better. When Pantera emerged in the early '90s, the fall of hair metal had led to the rise of its virtual opposite: terminally serious death metal and grindcore. Bands like Carcass and Napalm Death landed major-label deals -- and deservedly so -- but the sudden increase in popularity of ultra-extreme underground metal relegated anything with even a vague sense of humor to the margins.

But Dimebag knew how to have it both ways. He crafted stern metal that was brutal and menacing, but which helped turn his band's concerts into large-scale versions of that keg-party scene from Old School.

Pantera's success was largely attributable to the fact that the bandmates were equally ferocious and fun-loving, a rare achievement in extreme metal, and Dimebag was often the life of the party. He was heavy metal's id, a loopy, leering drunk who guzzled so much Crown Royal, he often had to be carried to his tour bus.

On wax, Dimebag's guitar-playing was as animated as his personality. His DayGlo solos were among the most wildly expressive in metal: fast, loose wind sprints up and down the fretboard. His best work, in songs like "New Level" and "Becoming," aped the shrieks and squeals of a couple of alley cats fighting over dinner. Just as impressive was his prowess as a rhythm player. His riffs were so beefy and muscular that his guitar should have been tested for the stuff used to thicken Jason Giambi's neck.

But for Dimebag, everything was better outsized. He grew up on Led Zeppelin and Van Halen, and was infatuated with the larger-than-life aura those bands cultivated. He was unabashed about wanting to be in the biggest band in the land, and as a result, Pantera became one of the few acts with an underground sound and a mainstream following. The band startled the music world in 1994 when its album Far Beyond Driven debuted at No. 1 on the Billboard album chart. Egos, alcohol, and various other substances led to the demise of Pantera, but Dimebag's playing didn't suffer in Damageplan; his guitar work, in fact, was the lone noteworthy element of the band's otherwise rote album.

Now that he's gone, the man's career will be mythologized plenty. But misty remembrances don't befit a heavy-metal prankster, the guy who once shot bottle rockets at an unfortunate soul who happened to doze off in his presence. Besides, we'd bet a paycheck that this cowboy from hell is asking Beelzebub to pull his finger right about now.