The Battle for East Cleveland

With bankruptcy looming (again) and merger talks heating up, a look at how East Cleveland arrived here and what might be next 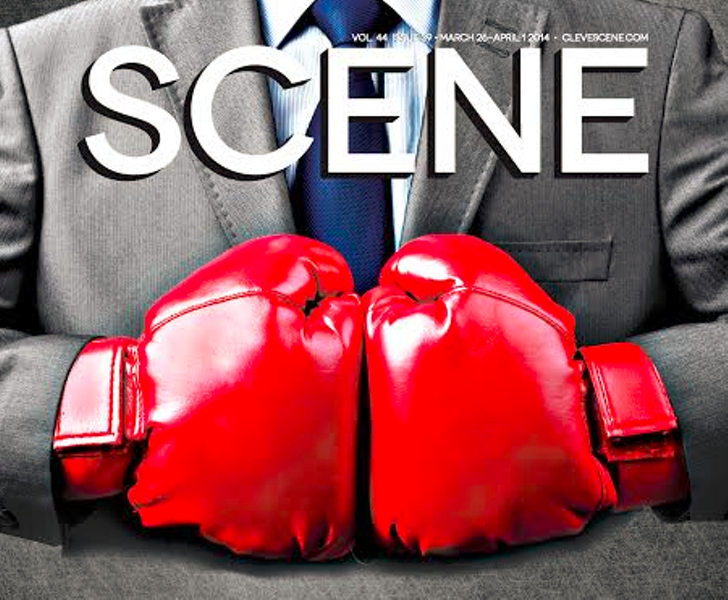 Yost called Small and other members of the East Cleveland Concerned Pastors for Progress to speak frankly about the fiscal situation in East Cleveland. They, after all, are one of the most powerful and prolific pipelines of information in the city. But Yost also called on Small to gather Norton and City Council together, to pray, to mend hearts, to heal the deep rifts that have plagued the top of the leadership ladder for decades.

"[Yost] is a man of faith," Small said. "And the mayor is a man of deep faith. He called on us to end the bickering."

There is hope that faithful bridge-building can staunch some of the bleeding, but precedent is not an optimistic barometer.

East Cleveland boasts a string of mayoral blunders for the history books. There was Saratha Goggins, who was pinned with a manslaughter conviction in the '80s for stabbing an ex. There was Emmanuel Onunwor, who raked in more than $70,000 in bribe money and was shipped off to federal prison on corruption convictions. And there was Eric Brewer, the former journalist turned politician who ruled East Cleveland with a mean streak before losing to Norton in 2009 by a 2-1 margin after photos of him in lingerie spread like wildfire across the city. Polling shows Norton would have likely won without the Brewer scandal, and, for his part, Norton refused to make political hay out of the issue during the campaign. Brewer believed his opponent was behind the leak. (Brewer declined to be interviewed for this piece, though he did offer his services as a paid consultant. Scene, in turn, declined.)

Brewer's administration routinely and hellaciously fought with city council, of which Norton was the president at the time. Meetings during those years made for must-watch cable access TV. Once Norton took the mayoral reins, things were supposed to be different, but not much changed, as Norton himself admitted in his State of the City address earlier this month.

"Toxic political relationships have created unnecessary distractions," he said. "Metaphorically, we suffered needlessly in a circular firing squad of self-inflicted gunshot wounds, and then argued about who would drive us to the hospital for treatment."

There was every reason to finally look forward when Norton defeated Brewer ­— anyone not named Brewer could have probably won the hearts of voters ­— and the mayor was fortified by compliments. He was a smart man, the people declared. He was a sympathetic man. He was an innovative man. He brought an abundance of experience and charisma to government.

And Norton continued to receive those accolades. Joe Cimperman called him "one of the smartest guy in elected life." Residents, for the most part, continued to sing his praises, and Yost, despite his differences with Norton, called him a "bright and energetic guy." But the challenges and systemic ailments in East Cleveland are far beyond the capacity of one man to diagnose and to cure.

"This is going to be the test of his lifetime," Councilman Nathaniel Martin said in 2009. "East Cleveland is going to be his challenge. It could be his victory or his Waterloo."

Martin was decidedly less rosy when speaking with Scene this year.

"Gary Norton is a bright young man, but he's made the mistakes that Eric Brewer made: ego and arrogance," Councilman Nathaniel Martin said. (No other East Cleveland councilperson responded to Scene's request for interviews.)

Communication between the mayor's office and council remains stagnant at best. When former Police Chief Ralph Spotts retired earlier this month, a move Norton says saved between five and eight other police jobs from hitting the chopping block, Scene confirmed that Martin wasn't even made aware of the official news for a full day after the move was made.

The current rift played out as publicly as the last. For example, council voted in 2011 to strip the mayor of his secondary title as safety director, which came with an additional $37,000 a year. (The mayoral seat brings a $40,000 salary on its own.) Then-Council President Joy Jordan led the charge. Even then-Councilwoman Mildred Brewer, who was a Norton supporter, boycotted a meeting to vote, saying, "It's a personal thing. They just do not like the mayor." Former Councilwoman Chantelle C. Lewis said at the time that she had written Norton a letter declaring that she didn't want any interaction with him in "any unofficial capacity."

Pettiness poisoned the proceedings ­­— supporters argued the salary-cutting move was simply to save the struggling city $37,000, but the city was facing millions in deficits, and Norton vetoed and sought legal remedies to override council's decision.

And even beyond such headline-worthy news, Norton's financial oversight hasn't been any better.

Records from the Finance Department show a problematic executive administration just blowing up since Norton's first election. Between 2010 and 2013, the mayor's own executive budget deficit ballooned from $821,982.15 to $4.6 million.

Among other governmental entities, City Council and the Municipal Court stayed in the black most years. The court is sitting on a $14,536.29 hole heading into this year. Council itself returned $139,834.64 net-positive last year. Elected representatives on that body are quick to point out the differential. It's on the mayor, they'll tell you; not the council. Such is the way of government in East Cleveland.

Norton laid off seven employees earlier this year ­— five in parks and recreation and two in the police department ­— to meet pressure from the state. The officers were later picked up as security personnel at the library. The parks and rec positions will be filled by volunteers from the Boys and Girls Club of America. Those cuts are small potatoes, though, when the state auditor is demanding the budget be balanced.

About a dozen staffers have left within the last four or five months, via retirements or outright quitting. "They're jumping ship left and right," Martin said. Ross Brancatelli, the former city engineer, took off recently. He had been in an on-again, off-again relationship with East Cleveland since 1978. Councilmembers sent him into retirement with a heap of praise and an official proclamation earlier this month. Martin openly wondered what the departure of Brancatelli's institutional knowledge will have on the city.

Still, there's more than $400,000 in payroll churning every two weeks.

There's a sense among East Cleveland residents in the know that the grime of history is too thick now. Leadership is set in its ways. Criminal records line the dossiers of past mayors, councilmembers, police officers. Once in power, as history shows in East Cleveland, access to what little resources are available is unparalleled.

"When you get people who are not really educated on how to run a city," said Gezus Zaire, a filmmaker who spent a winter recording the documentary Operation Save East Cleveland, "then the smartest of those people figure out how to take advantage of those other people so they can suck it dry."

That dysfunction and small-time power-grabbing doesn't just infiltrate the higher rungs of civic leadership; it stretches down to the nooks and crannies of everyday boards that operate basic city services. And there's no better example than the board of the East Cleveland Public Library.

East Cleveland's library board is, in theory, a seven-member body. But in its current state of discord, all its rules have become, for practical purposes, theoretical. Along with the local school board, the library board represents East Cleveland's hottest peripheral locus of power and pursuit of same. It's been the subject of ongoing controversy since the end of last year.

In truth, it's been the subject of discussion since 2011, when East Cleveland elected not to merge its library system with that of Cuyahoga County. (An East Cleveland/Cleveland merger would not include the school systems or libraries.)

In December 2013, the board ­ under the presidency of William Fambrough ­ ousted then-library director Sheba Marcus-Bey in a contentious 4-3 vote. It was the same boys-against-girls configuration that had characterized most of the board's recent votes. Marcus-Bey's dismissal was and still is considered groundless, given her stellar performance during seven months of service, though current library employees said that Marcus-Bey hired friends and relatives and paid them at a higher rate than workers who'd been there for 15 or more years. Regardless, Marcus-Bey was given no negative evaluation prior to her dismissal, and Fambrough and his cohort gave no explanation to the female members about the termination.

"This behavior reflects badly on East Cleveland," Marcus-Bey told Scene earlier this year. "I just hope it can be a stable library and that people can respect the fact that the public really needs a library."

Since Marcus-Bey's abrupt dismissal, interim director Monisa Ramseur has reigned with what some on the board described as inefficiency and lack of transparency. Her lengthy director's report on March 17 chronicled what she viewed as the library's central problems ­ zero accountability, blurred lines in leadership roles, a disregard for policies and procedures ­ and a grander suspicion that the library's board had been "sabotaged" in order to create financial and operational disaster so severe that a larger entity would have to take over.

That should sound familiar. The library's leadership is both a microcosm and echo of the city of East Cleveland at large: a city on the precipice of ruin, but a city nonetheless resistant to change.

The newest ruin that befell the Library was ­ predictably ­ a financial one. As of midnight on March 16, the library no longer had liability insurance. Fiscal officer Charlene Hollowell announced the news in a defensive fiscal report which also included the jolly revelations that $82,000 and $400,000 were missing from the budgets in 2010 and 2012, respectively. An auditor is currently reviewing the library's books line by line.

As for the insurance, Hollowell told the bewildered Fambrough that she brought the issue to the board in December and that she'd been pursuing options since April 2013. During that time, no less than five companies declined to cover the library. A sixth and final insurance company may yet grant them a policy with an increased deductible, she told the board.

On March 24, Monisa Ramseur told Scene that ECPL had, at last, acquired a new insurance policy from a sixth and final company. It was at a higher deductible, which board member Mary Rice called "exorbitant," but the library expects to be covered as soon as the check is signed (which may yet prove to be a hurdle).