The Best Man in Cleveland 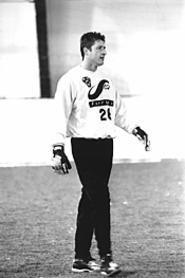 Inside a scruffy soccer arena in Warrensville Heights, Denny Ciornei directs traffic in front of his goal, instructing like a coach. This wouldn't be unusual, save that Ciornei is a third-string goalie who's played in but 11 games over his seven-year career. At age 34, he's AARP-eligible by the athlete's clock. There is no upside from here.

In the pecking order of sport, third-stringers can be liked. They can be respected. They are rarely listened to. Success, this is what draws ears. Yet the young Turks of the Cleveland Force do exactly what Ciornei says. Former college stars or not, they understand that when the best man in Cleveland speaks, it is wise to listen.

Ciornei is an unlikely presence in this dingy arena. He grew up in Codlea, Romania, the kind of place where an American welfare queen would be a captain of industry. His home had mud floors, no running water. Mom worked in a factory knitting gloves and socks. Dad was a professional drunk and wife-beater. Denny went to school wearing his sister's pants and shoes. "You either do that, or you go without shoes," he says.

At the time, Romania was ruled by communist President Nicolae Ceausescu, a discount Stalin with an appetite for blood and a gift for wrapping his country in poverty. "There was always fear," Ciornei says. "You could never talk about the President, even with your friends." It was a country built on the rat system. Selling out your buddy was proof of loyalty. "If a guy gets drunk, says something about the President -- next thing you know, he disappears, and you get ahead."

Ciornei's grandpa talked about the President. He went to prison for five years. When he got out, he spoke again and got another five years.

Even children felt Ceausescu's wrath. Policemen would watch a group of young boys and identify the leader, then pull him aside for a beating. Ciornei took his share. It was the government's way of teaching fear; a boy mustn't become a man with ideas of his own. At age 8, Ciornei finally summoned the will to report his father for delivering yet another beating unto Mom. When the cops arrived, they told Dad, "Next time, you need to whup her harder, so she doesn't come to our police precinct."

Yet by Codlea's standards, the Ciorneis were wealthy. They had relatives in America and received regular care packages from across the sea. So they spent six years bribing officials with coffee and cigs to get exit visas. Ciornei arrived in Cleveland at age 14, unable to speak English and astonished by what he saw. "Seeing the lights on the street just blew me away. How can they keep these on?"

By American standards, he had an excuse to be a punk. Grew up poor. Had an embittered drunk for a father. No, it wouldn't be his fault. But when you're raised in the land of the difficult and come to the land of plenty, you don't see excuses. You see opportunity. And so you work.

Back in Romania, Ciornei had been enrolled in a program that taught small-engine repair. By the third grade, he could rebuild engines "with my eyes closed," he says. But he rarely got to run them. The program director stole all the gas.

It was fine training nonetheless. He went to West Tech, then to trade school, and finally to a mechanic's job at Continental. In the meantime, he bought and sold homes, rehabbing them in the process. Not till age 27, antique for a rookie, did he win Cleveland's third-string goalie job at an open tryout.

Ciornei is supposed to bitch. These are the rules of America, the rules of athletes. He must bitch about playing time, about working as a mechanic and a professional goalie, about the wage scale of indoor soccer, which bottoms out at just $2,500 a month.

Yet Denny Ciornei knows only gratitude. He speaks in torrents: stories about being cornered in an alley and beaten by Ceausescu's police, stories about his love for fixing airplanes. All are delivered with a smile and a glint. Even things that would drive a man crazy -- like how his mother-in-law wouldn't let Ciornei see her daughter unchaperoned for their first five years of dating -- are relayed with appreciation. "Right now, I kiss her mom for giving her this upbringing and respect."

His speech is littered with such refrains -- "how we take things for granted," "hard work," "never quit," "respect." At first listen, you suspect they were jacked from some self-help infomercial in the small hours of the night. But the guy's so earnest, his gratitude so relentless. Here's a man who clearly believes.

After all, he has an immigrant's understanding -- a better understanding -- of what it is to achieve. He's got a wife and daughter, a union job, and a house in Parma. At just 34, he's become a patriarch in his extended family, a settler of disputes, a dispenser of wisdom, a man of respect in Cleveland's 20,000-strong Romanian community.

He also has an employer who lets him swap shifts to play a little boy's game. So what if he spends his nights at the Convocation Center on the bench, watching teammates perform? "You do your part day in and day out; that's my satisfaction," he says.

Ciornei understands that a small man can be a great man if he sacrifices, if he works, if he does what's right. There is honor in this, he believes. And he is right. Because after spending an hour with Denny Ciornei, you walk away knowing it's time to be a better man.