The Best of the Fest

Soundbites recaps some of the weekend's top sights and sounds. 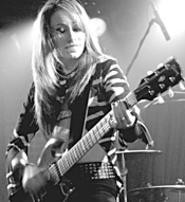 The best moment at this year's Cleveland Music Fest came at just past midnight on Saturday at the Peabody's complex. Upstairs at Rock Star, the Jah Messengers laid down some soulful, spiritual reggae. Downstairs at the Pirate's Cove, it was time for Heroin Dave and the Needles -- a band whose very name represents just about everything that the Messengers speak against. It was a wild clash of styles under one roof, kind of like Jesus and Beelzebub catching a matinee together. There were lots of other highlights at the CMF, as 234 bands took to 13 stages over four days. Here are some of the best sights and sounds we took in.

Best Booty-Bouncin'
When the young Cleveland hip-hop quintet the U-Click took to the stage at Club Kaos on Friday night, the ladies jumped up on the tables, their derrieres shakin' like they had just seen a ghost. The Click responded by baring their chests, grindin' with the girls in the crowd, and spittin' rapid-fire rhymes over bass lines thicker than Martin Scorsese's eyebrows. Meet the 'hood's new heartthrobs.

Best Band Not Yet Old Enough to Buy Cigarettes
The fresh-faced teens in the First Man Out have honed their melodic punk into a winsome whirr. Yeah, their sound owes an obvious debt to fellow pop punk groups like Taking Back Sunday and Fall Out Boy. But in the Agora Theater on Friday, they compensated for it with infectious exuberance and big dopey grins. Even the most stone-faced onlookers put down their beers to clap at set's end.

Best Discovery
With one of the fattest, most enveloping guitar sounds of any band at the CMF, Attic Dreams proved to be a real find for those who dig lots of slobbering six-string. Coming with fuzzed-out, '70s-style riff rock at Rock Star on Saturday night, the band's sound was almost as big as the singer's flared pants.

Best Stage Banter
"Hey, this turnout is bullshit," American Werewolves frontman Trevor Moment bellowed as he scanned the half-empty Agora Ballroom on Friday night. "But at least the people here aren't pussies," he added as the 'Wolves tore into a badass set of bare-knuckle rock and roll that was so fierce, even a few ladies started throwing elbows in the pit.

Best-Dressed Rockers
Jaded Era got its Racing Stripes on at Peabody's Saturday night, sporting big black hats, little white ties, and in the case of the drummer, a kick-ass headband. Inspired by Oreos, dominos, and Mariah Carey, their half-black, half-white presentation was profound. It demonstrated to the crowd that in an oft-divided world, opposites can mingle peacefully. It also allowed singer Kira Leyden to bare her midriff, which was probably the real point.

Best Fake Stab Wounds
With big black gashes painted over runny white clown makeup, the frontman for the ghoul punks of Creepshow 1977 looked as if his face had been used to put out a grease fire. Even scarier was the group's drummer, a lumpy dude in a bondage mask, who resembled the gimp from Pulp Fiction. It all amplified the over-the-top fun of the band's hook-laden horrorcore, which was like a bloody B-movie come to life.

Best National Act
Peabody's was so packed on Thursday, when Devildriver performed, that Satan himself would have doffed his top to beat the heat. It was hard to breathe and even harder to turn away from the band's blackened thrash. Devildriver's set was ferocious enough to compensate for a last-minute cancellation by headliner Machine Head after the band's frontman, Rob Flynn, came down with a viral infection. Playing selections from the group's forthcoming sophomore LP, The Fury of Our Maker's Hand, Devildriver frontman Dez Fafara growled, grimaced, and goaded the crowd until the floors became slick with sweat and the club took on the musty air of a giant gym sock.