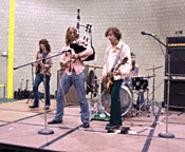 You've heard the blues, and you've heard modern, rockin' takes on the blues with a host of esoteric influences. But have you ever heard dirty, blues-based rock featuring a bagpipe? Well, we haven't, so the Black Diamonds' "Wentelteefjes" (that's Dutch for bread with cinnamon) is just one reason that you should spend Thanksgiving Eve with the band. Representing the next wave of Cleveland rock, the lads are led by irons-wailer Chad Van Gils, whom the band describes as "a kilt-wearin', football-kickin', soccer-scorin', Ameri-Dutch singer." But then again, every band on the bill has more than a little kick.