The Brats Beat On 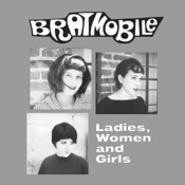 Everything about the rise and fall and return of Bratmobile, from its unlikely beginning to its triumphant reformation and the release of its new album, Ladies, Women and Girls, smacks of the kind of drama that would insinuate itself into the narrative of an overwrought but edgy youth-on-fire film. Singer Alison Wolfe and drummer Molly Neumann met while attending Evergreen University in Olympia, Washington, and started the influential feminist 'zine Girl Germs. Through the 'zine underground, the pair hooked up with East Coast guitarist Erin Smith, who was publishing the respected, offbeat Teenage Gang Debs from her Maryland base. Casual correspondence revealed that the three had rock and roll in mind, and they pledged to find a way to get together, ultimately using their school breaks to jam and discuss a direction for the rock girl group that they christened Bratmobile.

"We started this band on a whim," says Neumann, as the cable guy wires her new apartment in Berkeley, California. "We thought, We can do this. There are other people who can't play very well that have cool bands. Why can't we?"

After officially forming in 1991, the trio caught the wave of media attention that was being lavished on girls with guitars, a class that included the likes of Bikini Kill, Heavens to Betsy, and Tiger Trap. Over the next three years, the mainstream press continued to focus undue attention on the ladies of Bratmobile as the avatars of the new riot grrrl movement. After signing to Kill Rock Stars and releasing "The Real Janelle" EP, a handful of singles and compilation tracks, and an excellent Peel session, the Bratty ones seemed poised to do some serious work toward influencing generations of loud, young, and snotty girl bands.

Unbeknownst to the rest of us, the pressures inside the Bratmobile machinery had been building inexorably. In the middle of a 1994 show at the Threadwaxing Space in New York City, the band exploded and walked off stage midshow. Before the equipment had cooled off, Bratmobile was no more.

"It was real distracting," says Neumann of the intense media spotlight. "We were young when that was going on. It was our first band, and when you're a punk rocker, you don't always have the information about the best way to do everything. Ultimately, we had different opinions about how to deal with it, and that was part of the reason we had to stop working together."

Wolfe and Smith went on to form Cold, Cold Hearts, and Neumann found herself in much demand -- she played with a new band called the Peechees and in a side project known as the Frumpies, and held down a gig as office help for the indie label Lookout! Records in Berkeley. The three had patched up their personal differences almost immediately after the band broke and remained in contact through all of their various affiliations. Two years ago, they decided to give it another go.

"We sort of found ourselves around each other again," says Neumann. "We were in between bands. Erin and I had been talking about trying to get together and play together again. So we were all together in D.C. at a show, just hanging out, and everybody was like 'Hey, look, Bratmobile's here.' And we were like 'Uh-huh, so what? Shut up.' I got home from that trip and told my husband Chris about it, and he said, 'You guys should do something.' I said, 'You don't think that would be dumb?' We were cautious at first; we didn't want to rush into anything. When we did get together, it worked."

Months later, in February of last year, Bratmobile had ramped up sufficiently to test the waters with a live gig, choosing Oakland, California's Stork Club as the venue to unveil its newly turbocharged version with its catalog material as well as two new songs. The results astounded not only the audience, but the band itself. The Brats split their time between coasts and eventually worked up an album's worth of new material. With its power and confidence at full throttle, Bratmobile embarked on a series of opening dates, playing with respected indie acts such as the Make Up, Sleater-Kinney, and the Donnas.

This year marked the real return of Bratmobile, as the trio signed with Lookout! and then headed to Tim Green's Louder Studios in San Francisco to create the raw power of Ladies, Women and Girls, an album that runs the gamut from the punk intellectualism to hilarity. While there were plenty of surprises in store for Bratmobile in its retooled version, none was bigger than the reception that the band received on its initial tours as an opener. "We were surprised that people were still into it," Neumann says with a laugh. "And that there were girls that are 16 and 17 now that were excited about seeing us. They weren't into music when we started the band, and now that they've gotten into music, they've discovered our band, and that was really gratifying. It's exciting to know that there's this new generation of girls that are getting into punk and music and are coming to our shows."