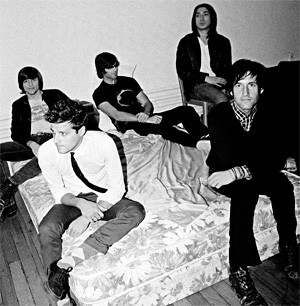 Back in 2003, the new-wave revival was a mere glimmer in the mascara-lined eyes of a select few artists. Bands like Franz Ferdinand, Interpol, and the Killers were combining New Order's synth riffs with Duran Duran's wardrobe — and a whole new sort of nostalgia was born.

It was around this time that The Bravery sprang up in New York City. Singer Sam Endicott and keyboardist John Conway — college buddies from Vassar — founded the group on the sounds they heard coming out of the clubs a few blocks from where they lived. "The electronic music had the attitude of early punk rock," recalls Conway. "We were very attracted to that. We wanted to mix that DIY-electro aesthetic with a garage-rock thing."

Conway likes to say that the Bravery — which also includes drummer Anthony Burulcich, bassist Mike Hindert, and guitarist Michael Zakarin — stumbled on the music by mere chance. Never mind that similar revivals were going on around the world — in England, Scotland, and on both U.S. coasts. Conway swears he and his bandmates were unaware that other groups were hitching onto the new-wave groove.

"The clubs were playing all this different music," he says. "We wanted to mix all that up and do it all in one place. "

By the middle of 2003, N.Y.C. hipsters were looking to shake their booties to something other than the usual electronica they'd been dancing to for years. So The Bravery's inaugural gig in Brooklyn blew away the audience, and it became the must-see buzz band around town. Long before its self-titled debut album was released in 2005, the Bravery was proclaimed the Next Big Thing by MTV, Rolling Stone, and The Village Voice.

But then Franz Ferdinand released its first CD. Interpol already had one album on the shelves and a second on the way. The Killers — those damn Killers — were months away from dropping their debut. And Hot Hot Heat, Rock Kills Kid, and tons of other bands that sounded like they time-warped from 1982 were waiting in the wings.

Satisfying New Yorkers was one thing — the Bravery was one of the few East Coast bands making this sorta noise, and New Yorkers prefer their buzz bands homegrown — but selling an album was a different endeavor. The Bravery was released in early 2005. It managed to climb to the bottom part of the Top 20, mostly fueled by the super-hooky single "An Honest Mistake." But the buzz that followed the band's early live sets had waned by then — thanks in no small part to all those other synth-lovin' groups that were copping old-school riffs. "We started making our music just for fun," says Conway. "But time will separate us from all those bands that we're associated with. We don't sweat [the comparisons]."

Specifically, he's talking about the Killers. Even though no one in either band was even around when new wave's seeds were first planted in the late '70s, that didn't stop the Bravery and the Killers from feuding over which group was more authentic. The Killers' frontman Brandon Flowers fired the first shot, calling out Conway and Endicott for their goofball first band, Skabba the Hut, which came out right around the time the ska trend was dying. According to Flowers, the Bravery was jumping on yet another bandwagon. The Bravery hit back, as Endicott referred to Flowers as "a little girl." Then Flowers delivered a crushing right hook, implying that the Bravery was the Candlebox of the new-wave revivalists. The guys were floored by assertions that they were a bunch of trend-hopping phonies.

So, after months of constant touring, the Bravery regrouped in the studio with producer Brendan O'Brien, who sat behind the boards for Pearl Jam's landmark Vs. and Bruce Springsteen's most recent albums. The goal was to wipe away all the New Order/Gang of Four/Duran Duran references. "We intentionally made the first record an upbeat party record," says Conway. "We recorded [The Bravery] in our apartment on an iMac with whatever tools we had. After being on the road for 18 months, we jelled as a live band. We wanted to reflect that."

The resulting record, last year's The Sun and the Moon, turned out to be a more rock-oriented outing that curtails the synth-pop dance grooves that fueled the club-bound debut. At times, the album steers into the epochal/anthemic territory overseen by U2 and Springsteen. The guitars are louder and more prominent. Synths accentuate the songs, rather than power them. And the whole thing is aimed at beer-swilling arena crowds, not coked-up club kids.

But the thing is, the Killers got there first . . . again. On their second CD, Sam's Town — which came out seven months before The Sun and the Moon — the Killers stripped their previously synth-heavy beats to a majestic, guitar-powered core.

When the similarities between the two bands' career trajectories are pointed out to Conway, he pauses — for a good 15 seconds. "I think we sound more different now than before," he finally says. "I don't think they do as much. We wanted to experiment with new sounds and different ways of creating sonic textures."

To its credit, the Bravery's transformation into a Big Rock Band was a pretty effortless one. In fact, if you didn't know better, you'd think that two different groups made the albums, although Conway sniffs at the distinction: "I don't think so."

The Bravery is now prepping an expanded version of The Sun and the Moon, which will include an extra disc's worth of songs that were remixed and performed specifically for the project. Conway says the album — which should be in stores in a couple of months — is an accurate reflection of where the Bravery is headed. "We reinvented a lot of songs on the road, recording some on the back of the bus," he says. "It links things together and makes sense of everything. In a way, it brings us back to square one."

Hopefully, the Killers aren't working on a record exactly like it.