The Brits Are Alright

New box set captures the agony and ecstasy of the golden age of English rock. 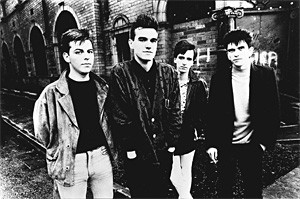 Fans of deafening reverb and swirling guitars rejoiced when enigmatic My Bloody Valentine frontman Kevin Shields recently revealed that his band — which has been dormant since 1995 — was reactivating to release a new album and play a handful of gigs. This announcement came only a few weeks after another noisy, distortion-drenched band, Swervedriver, broadcast its own reunion tour plans for 2008, and spaced-out psych-rockers the Verve performed their first concert since breaking up in 1999.

Each of these bands plays a variation on a type of rock music known as shoegaze — a genre highlighted on a new box set, The Brit Box: UK Indie, Shoegaze, and Brit-Pop Gems of the Last Millennium. Spanning roughly the years 1985 to 2000, the four-CD collection documents the countless number of musical fads and styles that sprang up in the U.K. during that time. If this seems an impossible task — or one destined to be woefully incomplete or rife with contradictions — well, that's totally correct.

However, the Brit Box still contains a gold mine of brilliant songs. Gems from the country's patron saints (the Cure, the Smiths, the Jesus and Mary Chain) anchor the first disc. The rest builds on that foundation — incorporating everyone from indie-dance acts (Charlatans, Happy Mondays, Stone Roses) to bands that have never really fit in anywhere (Placebo, Super Furry Animals, Saint Etienne). Songs from lesser-knowns are hit-or-miss; for every stroke of genius (the 1960s-inspired psych-rock of Eugenius, the Nico-like majesty of the Shop Assistants, Dodgy's sunny Beatles-isms), the Brit Box has plenty of things that are best left forgotten (Mega City Four's derivative jangle, Moose's interminable slo-core drone).

Nevertheless, these subpar tunes imbue the Brit Box with an air of authenticity and give listeners a better idea of how quickly fads became watered down in the U.K. This shambling atmosphere is exacerbated by the set's sequencing. Arranged roughly chronologically, it's easy to see how readily these genres blurred together — and how difficult it really was to classify many of the bands.

What mainly stands out on Brit Box is how enjoyable most of the music remains (even after taking the unavoidable feelings of nostalgia into account). While production tricks and other flourishes sometimes date songs, overall they remain remarkably well constructed — which contributes to their enduring popularity, says Miki Berenyi, singer for the ethereal pop-goth band Lush.

"I'm going to sound like a real old fart here, but people actually used to write songs back then," she says. "I find a lot of music now relies on cover versions, shameless rip-offs, samples, or a retro feel that so replicates the original, it's often hard to even recognize an original song when it is one."

That attention to tradition has helped the tunes endure, according to Mighty Lemon Drops singer and guitarist David Newton. "The majority of the music is based around the electric guitar, drums, and bass — as opposed to production and studio trickery, and beats and loops and synthesizers," he says. "It's pretty much timeless. If you listen to a Smiths track from 1985 — bands are making records today that still sound like that."

Yet, it's curious that The Brit Box's otherwise smart, exhaustive liner notes only circumspectly reference one crucial part of English culture: its ingrained class system, where money, education, and regionalism carry great meaning.

But the U.S. interpreted Britpop differently — both then and now. Beyond the singles that caught on with a wider audience here (James' "Laid," Pulp's "Common People," and Oasis' "Live Forever"), Britpop was viewed as novelty and almost fetishized, with such iconography as the Union Jack flag targeted as a fashion accessory instead of a political statement. And while U.S. listeners can appreciate and enjoy Britpop on its own merits, it almost seems revisionist history to address the music apart from its political and cultural implications.

"I think the American audience has a romantic, rose-tinted view of that era," says Simon White of short-lived Britpop band Menswear. "You get drawn to the imagery surrounding it and form your own picture of what the time must have been like. People think it must have been like an Austin Powers movie. But in the real world, it was very gray, dark, and depressing."

Similar misconceptions surround shoegaze, at least in terms of gauging how popular it actually was. The genre's presence on The Brit Box is relatively small. But judging by the large number of current American bands — Asobi Seksu, Blonde Redhead, and Airiel, among others — taking cues from shoegaze, it's easy to overstate its popularity.

"Things come back into fashion because they represent something opposite to the current trends," says Berenyi. "There's a disarming amateurishness in a lot of shoegazing music, which conveys a vulnerability sorely lacking in much of today's big-business, packaged, marketed, super-knowing commerciality. Much of the music is more fragile, less manipulative, and trusts the listener to find their own path."