Sunday, August 19, at the Beachland. 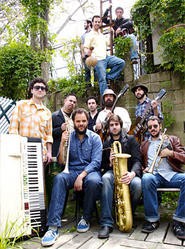 Those willing to travel from Harlem to Ethiopia in search of the perfect instrumental funk have no truck with pimp-hat clichés and "funky" jam bands.

The Budos Band, an 11-piece on New York's Daptone Records, has spent the past five years perfecting its recipe. In a kitchen of analog tape and vintage equipment, they cooked up The Budos Band II, due out in early August. It sounds like southern and African soul food, heard through an AM radio.

"We want to sound like an old record you found in your garage that's from 1971. You put it on, and you have no idea who these guys are," explains baritone saxophonist Jared Tankel, phoning from his Harlem apartment, where the wail of trains floods his open windows. "We like to call ourselves 'Afro soul.'"

Since its self-titled debut in 2005, the Budos Band has gone from exploring the Nigerian rhythms and horns of Fela Kuti to the sounds of Ethiopian jazz, which are filtered through late-'60s and '70s American funk.

The band's roots in the modern funk revival run deep. Several Budos are in the Dap-Kings, soul-shouter Sharon Jones' band. The Dap-Kings recently backed Brit pop-star Amy Winehouse on a few U.S. dates. Tankel says it's always good "if we get mentioned in the same paragraph with her and the funk revival."

The Budos Band, however, has no hot, sexy singer of its own. So it has to get a "hot, sweaty dance party" going with nonstop funk. "We're not smooth talkin' into a microphone," explains Tankel. "So we just gotta keep playing music the whole time."