Obama Is My Candidate Because He Follows His Heart 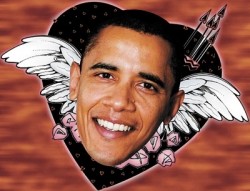 People say we vote on an emotional level, that we gravitate toward candidates of our own ilk. I don't look like either John McCain or Barack Obama. I guess I look a bit like Sarah Palin, with my kid, husband, brown hair and Tina Fey glasses, but the resemblance stops there. Palin leans far to the right, I lean to the left.

So in order to find my connection to the candidate with the funny name, I picked up a copy of Dreams From My Father, which Obama wrote in the mid-'90s before his political career began.

Barack Obama was born in 1961 when people didn't bother lowering their voice when uttering the "N" word. They had definite opinions about 18-year-old white girls who shared a black man's bed. They had names for children that resulted from such couplings. "Future President of the United States" was not among them.

Obama's parents separated when he was 2. After that, he saw his Kenyan father just once before his 1995 death. His mother's second marriage placed him in Indonesia for part of his childhood. "I was introduced to dog meat (tough), snake meat (tougher) and roasted grasshopper (crunchy)," recalls Obama of the land where his pet was an ape named Tata and he got his first glimpse of servants and beggars. At age 10, he returned to Hawaii to live with his grandparents. Obama was one of two black "misfit" students in his Punahou School class. This was hardly a traditional American childhood. Many would call it a detriment to a political career.

But in Dreams From My Father, Obama does not lament the challenges of being biracial or coming from a single-parent home. Instead, he gives straightforward accountings of the moment he learned his African grandfather did not approve of his white mother, of how the phrase "white folks" was uncomfortable in his mouth and of the escalating litany of racism to which he was subjected - from subtleties such as the lily-white models in the annual Sears, Roebuck and Co. catalog to the blatant name-calling. The first came from a boy in seventh grade. Obama recalls the boy's "tears of surprise" and plea of "Why'dya do that?" when Obama answered his slur by punching him in the nose. There was the tennis pro who told Obama not to touch the schedule of tournament matches pinned on the bulletin board because his color might rub off. Obama recalls "his thin-lipped, red-faced smile" and the way he asked, "Can't you take a joke?" when Obama threatened to report him.

Throughout high school and college, Obama wrestled with the white and black blood that ran red in his veins. It heightened his sensitivity to both cultures and the difference between them. It eventually called him to serve the people - a move that was discouraged from the outset. His decision to leave a promising corporate position in order to be a community organizer garnered empty words from the black ladies in the secretarial pool. "That's good, Barack," they said, although their eyes betrayed their disappointment. Ike, the "gruff black" security guard was more overt. "Organizing?" he said. "That's some kinda politics, ain't it? Why you wanna do something like that?"

I know how Obama felt. Thirteen years ago, I announced I was abandoning a lucrative career as an electrical engineer with an oil company in order to sit in a room and write. People smiled and nodded politely. They offered insincere encouragement. Then they shook their heads in bemusement when they thought I wasn't looking.

When I started writing in earnest, things didn't get off to a very good start. I collected 89 rejections before I had a single word in print. But somehow I kept returning to the keyboard. I marveled at the tiny flame inside me that fueled my determination, particularly when the waters were cold and dark.

Obama recounts a presentation before a group of ministers, whose support he sought for a neighborhood meeting with area police. It was about a month into his career as a community organizer in Chicago. The powerful Rev. Smalls stepped in about halfway through the meeting. He picked up one of Obama's flyers. "White folks come in here thinking they know what's best for us," said the Rev. Smalls, "hiring a buncha high-talking college-educated brothers like yourself who don't know no better, and all they want to do is take over." Obama was 24. He describes fielding the older man's smug barrage. "I sat there, roasting like a pig on a spit," writes Obama. He went on and held the police meeting anyway. It was a dismal failure, with only 13 people in attendance. Dreams From My Father is filled with such moments.

"I was operating mainly on impulse," says Obama, "like a salmon swimming blindly upstream toward the site of his own conception."

Yeah, that's what it's like all right. And you're alone. And you swim a long, long way around one obstacle after another before the murk begins to clear. Like the time I spent three solid months reworking a manuscript specifically for a publisher I thought was pitch-perfect for the work, only to find a glib form rejection in my mailbox two days later. I got over it. I kept writing. I learned that celebrating accomplishments is one thing; surviving the failures along the way is quite another.

The trials I'd endured were puddles compared to the oceans Obama has traversed on his path. But the drive to realize the writer inside myself has made me who I am today and ultimately saved me from myself. That's the difference between following a calling and acting on ambition. The later offers one-dimensional success. The former delivers salvation.

A walk along the presidential campaign route is not unusual for men such as John McCain or Joe Biden. They've been groomed their whole lives. As for Sarah Palin, she was plucked from Alaska and plopped upon this path in a fabricated, unnatural move that is evidenced by her campaign's floundering. But Barack Obama is poised to be the next president of the United States for reasons I truly understand. If a tiny flame kept me going, the fire in Obama's belly must be very powerful indeed. I believe in it.

I am not na•ve. Obama's gift for leadership can be deadly. It evokes the kind of hatred found in men like Lee Harvey Oswald and James Earl Ray. Our next president also stands before a country ravaged by greed, deceit and blood-thirst. The best we can hope for over the next four years is to round the corner, to rebound from the bottom, to unfurl one tiny new leaf.