A funeral director wishes he could close the casket on segregation. 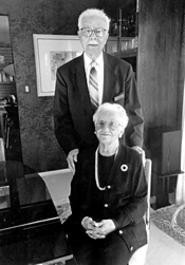 For most of William Boyd Sr.'s 87 years, death has been a frequent caller, arriving just before dawn on the coldest day in February or right in the middle of a big Sunday dinner. His earliest memory is of his undertaker father turning the family's front room into a makeshift funeral chapel by folding up the dining room table. Times were lean then, so they received mourners in their living quarters.

The original "son" in Boyd & Son Funeral Home also remembers when the city-owned hearse was a streetcar named "The Black Mariah," and the economy was so bad that bodies were kept on layaway, so families could try to scrape up $70 for burial.

"You'd hold 'em and you'd hold 'em; sometimes you held them as long as six weeks, and they couldn't come up with the money," recalls the silver-mustached, soft-spoken octogenarian. "That's something I'll never forget."

His father, Elmer F. Boyd, opened the city's third black-owned funeral home in 1905. Since that time, one tradition in the burial business that hasn't gone the way of the horse-drawn carriage is racial segregation. That practice began in Cleveland about a century ago, when the first black-owned funeral homes opened in the city. Unhappy with the new competition, the established white undertakers decided they would serve only whites. Likewise, they'd restrict black morticians to serving the city's then-small black population, nearly driving them out of business.

"There was this drawn line," Boyd recalls, noting that black people who were turned away from white-owned funeral homes often ended up on his father's doorstep. "That's been a practice that's gone on until today. It's been an accepted fact."

The effects of the color line were particularly severe during the Depression, when Cleveland's black population, being the last hired, was also the first fired. "A large percentage of my people were unable to pay for anything, and we'd have to turn [the bodies of their loved ones] over to the city for burial," he says, pausing for a moment to be with his memories. Well acquainted with silence, Boyd sometimes takes a full minute to collect his thoughts before he answers a question, his fuzzy gray head tipped in contemplation. An understated yet deeply religious man, he speaks of God often and with endearment.

Black morticians were also excluded from the state board of funeral directors. Boyd's father founded the black Cleveland Funeral Directors Association in 1927, so he and his colleagues could share the expense of hearses and specialized equipment like rollers for loading caskets.

The state board eventually changed its whites-only policy, but in the minds of funeral-home clientele, the color lines remain drawn. During his seven decades in the business, Boyd has buried maybe one or two white people.

Black people who approach white-owned funeral homes for services are still being "recommended" to him. "Throughout the years, I just never felt that people could overcome that prejudice. It's so deep-seated."

Just recently, Boyd says, two sets of family friends who are white approached the Boyds about funeral arrangements, but ultimately decided to take their business "to their own people." Boyd wasn't surprised, just disappointed that racial differences took precedence over fond regard. "But it does cause you to wonder -- when is the line of discrimination going to be removed, so that people of all nationalities can [feel comfortable] going to whichever funeral home they want? That day and time has not come, and I can't really predict when it will come."

Ed Miggins, a Cleveland historian who teaches at Tri-C, says that Boyd's recollections illuminate a larger, more persevering piece of local history. Since the 1970s, Miggins has collected hundreds of personal narratives of older blacks. Together, these narratives weave a portrait of a city that restricted blacks to society's margins while it reveled in its liberal, abolitionist past. Such restrictions, Miggins says, helped forge the path for today's racially divided city with the country's highest rate of unemployment among young black men.

Boyd's children and grandchildren have nonetheless chosen to follow him in the profession, expanding it to three locations. "It's unfolded into something that has been a great source of joy to my wife and myself," says Boyd, who never dreamed he'd leave a legacy. "Throughout the years, I was putting in 10- and 12-hour days in the business, trying to keep going. When they got into their teens, I began to realize that -- my gracious! -- my children were growing up, and I had spent very little time with them."

For Boyd, Cleveland's black history has been one long eulogy. "My, my, my, there's so many," he says, remembering the funerals of rich and poor. "Just recently, we had a service for a fellow named Bertram Gardner. He was a former vice president of Cleveland Trust Bank. The service for him, oh, by the time you got through, you're physically whipped. To hear this man's life expressed, what he did and how he did it, and the groups that he was affiliated with and the leadership he gave -- those things really toy with your inner soul. And they live with you. They live with you long after these people are buried."

Time and perspective have only made his work more affecting. "I think the older that I've become, it's even gotten more emotional for me," he says. "You're facing the feelings of the people you're serving, and those feelings envelop everybody. Sometimes I have an awful difficult time going through the plans."

Through his own grief, he's learned how to comfort. "When I first began working in the business, I never had immediate death in my home. I tried to empathize, but I never realized what these people were going through until I lost my own father. My feelings were completely different. It wasn't from the mouth; it was from the heart. That's lingered with me ever since."