It's 1944. Blue sky over Cleveland. Streetcars bustling to and fro beneath Terminal Tower's aspirational gaze. The war and its booming business bring jobs and cash and thrumming factories to the North Shore.

Marian Laska, petite and austere at 24, is serving salads at the big Lamson & Sessions Co. cafeteria at East 63rd and St. Clair, among tired and calloused workers from busy places like Bishop & Babcock Co., the East Ohio Gas Co., and the Whiteway Stamping Co.

There's a train coming into town now, chugging reverently along the New York Central tracks and rattling the eastside neighborhood's windows a bit. Drop-forge hammers pound out an industrial rhythm. Cleveland is a blacksmith's workshop. The natural movement of the city's shiny, metallic exoskeleton never seems to slow.

It's Oct. 20, an Indian Summer Friday as perfect as the city has ever seen.

Mayor Frank Lausche, an old-school cosmopolitan Democrat running in this year's governor's race, surely takes note of the sun from City Hall. He's relishing the Toledo Blade's endorsement this morning, while eyeing warily the threats of a strike over at the Illuminating Co.

The lunch rush at Lamson & Sessions' cafeteria is mechanical. You line up, you get your food, you sit down, you eat your food. You get back to work. Marian Laska, who's been on the job just a few months now, slips easily into the rhythms of Oct. 20, 1944. Everything's pretty much loping along as expected. We're getting awfully close to the big moment. 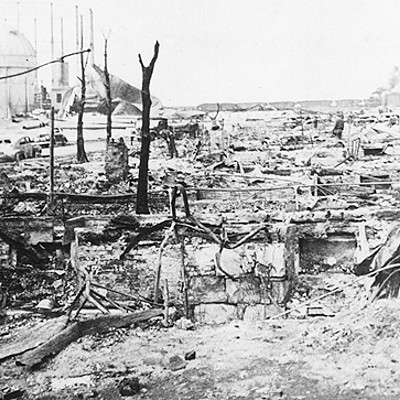 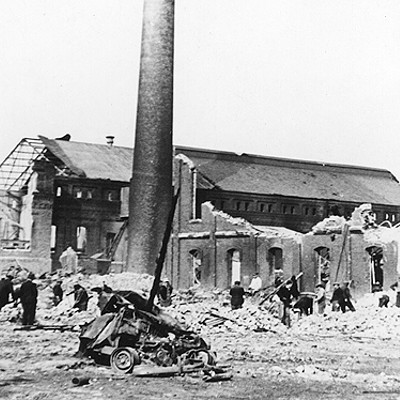 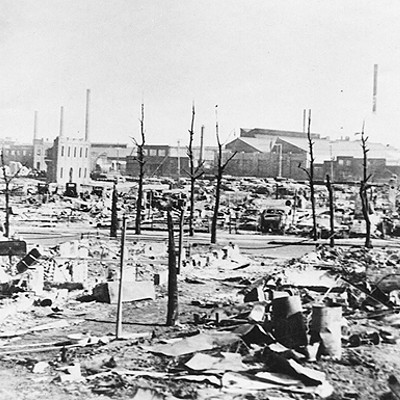 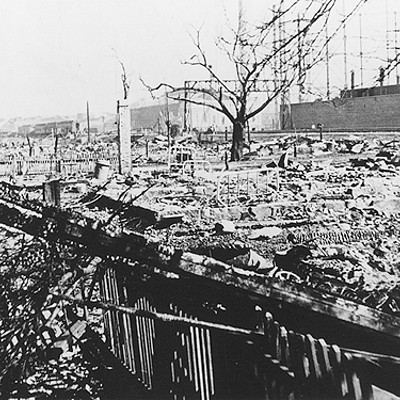 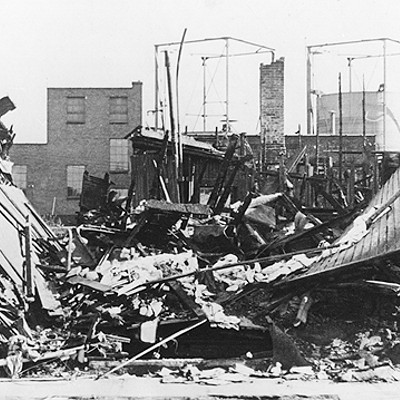 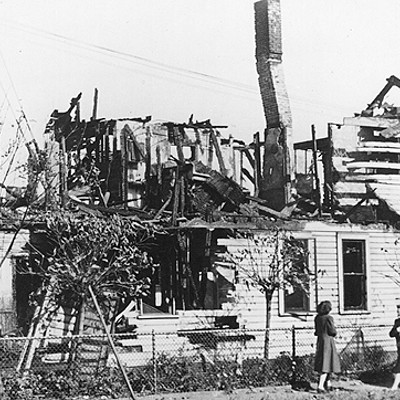 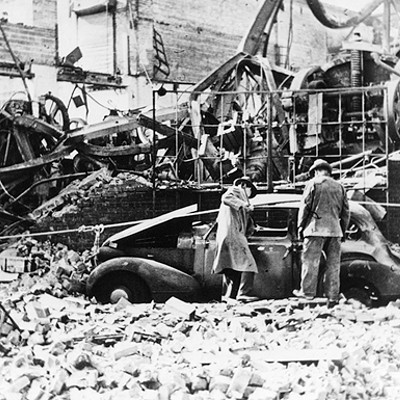 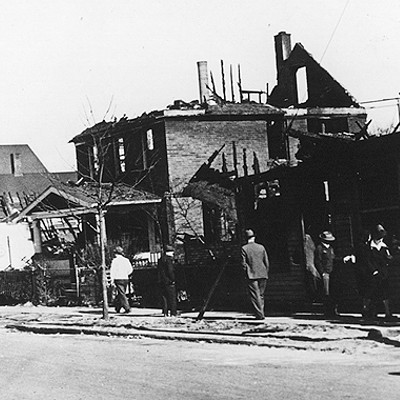 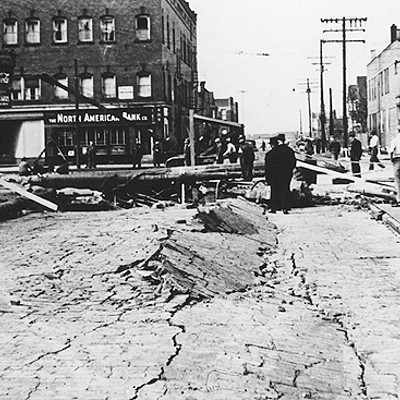 Art Stroyer, a 49-year-old foreman over at Bishop & Babcock, isn't going to lunch. "I ain't sick, but I'm goin' home!" he tells another guy at the plant as he clocks out and ambles toward his car in the lot. Rows and rows of automobiles reflect the unrelenting drive of war contracts all over this neighborhood. Sunlight glints off windshields, bouncing back onto the shiny steel surface of the East Ohio Gas Co.'s new cylindrical liquid gas storage tank — a giant bastard of technological wonder, the only one of its kind in the world. There's a fairly brisk wind tousling the trees along East 55th now.

Something like thunder shakes the ground, but it's probably just the train. There's always something happening here, something raising a splendid hell and casting clanking echoes down alleyways and into warm homes. Beautiful day outside. Art Stroyer's heading north along East 55th now, about to turn onto Lake Shore Drive to cruise back to his home in Euclid. He looks into his rearview mirror, and there it is: a truly awesome fireball ascending violently toward the heavens.

Of course, the postcard brickwork homes along East 61st Street these days do not really resemble the old neighborhood. These homes were all constructed in the late-1940s rebuilding campaign mightily helmed by local Slovenian leader Anton Grdina. He and thousands more took it upon themselves to bring it all back, to shout down the terrible humor of fate. Within a decade after the Explosion, the neighborhood had returned. Most of the same people returned too. But the cost in so many ways was incredible.

It's weird, really, to walk along the neighborhood now and try to feel out some sense that this is where it happened — to try and reconcile infamous and ghastly images of post-apocalyptic level destruction with the current mise-en-scène of a quiet bakery here, a busy playground there. This fall, 70 years after it happened, has seen its fair share of beautiful days much like St. Clair-Norwood saw on that October afternoon. With the right eyes, you can still see smoke in the air.

Still, with eyes less focused upon the wheel of history, you wouldn't consider at all that something like that had happened right here.

Back then, Art Stroyer and his pals could talk about the Cleveland Rams all day. Big win 19-7 over the Bears just last weekend. But bigger forces were afoot throughout the decade. U.S. troops landed in the Philippines on Oct. 20, 1944. Everyone was just abuzz with talk of the Pacific Theater. The war dotted the front sections of the Plain Dealer and the Cleveland Press daily, and you couldn't share a doughnut with somebody in this town without hearing him tee up a diatribe on The War. But business was good.

Cleveland in the early 1940s was bustling under the umbrella of this wartime economy, and its nearly 900,000 residents were all well aware. The city laid claim to the fifth-largest hub of war-related businesses in the nation. Innovation coiled like ivy around enterprises on every street corner. Ordnance contracts flowed like freshwater. The East Ohio Gas Co. was as much a beneficiary as anyone.

By 1941, the company had set down impressive roots in the community, purchasing the land and property of one-time competitor Cleveland Gas Light & Coke Co. 40 years earlier. Everything had grown brilliantly since then. The Slovenian neighborhood around St. Clair and East 55th prospered as contracts stacked higher and industrial plants became titans. From the sky, tightly clustered residences filled the landscapes like dense, finely wrought freckles — thousands of lives tucked neatly among sprawling warehouses and the churn of profit and hazard.

Generations of neighbors grew up here talking about the big gas company — in English and otherwise. Construction of three massive spherical tanks in 1941 was major news. The company was storing liquid gas up there. The fourth tank, a cylindrical beast built in 1942 and standing 57 terrifying feet, was even more monumental.

By maintaining liquefied gas at minus 257 degrees and single-digit pressure readings, the East Ohio Gas Co. found that it could store 600 times more gas on its property — all above ground and right next to those charming neighborhoods. The large cylindrical tank, built with great rapidity, held more than 100 million cubic feet of the stuff. The three spherical tanks right next to it cranked up the capacity to 250 million cubic feet. That's a lot of liquid gas stored around a lot of people. The phrase "time bomb" was not lost on Cleveland's population. "What ifs" were passed around like bread.