With the Fall of Troy. Wednesday, May 30, at the House of Blues. 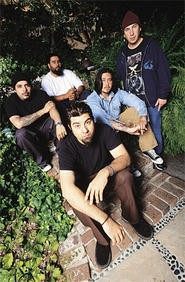 Given the fall of nü metal, some fans are surprised the Deftones are still kicking, much less putting out potently beautiful albums like last fall's Saturday Night Wrist.

Then again, the band came this close to calling it quits while making the disc. According to bassist Chi Cheng, lingering problems came to a head when frontman Chino Moreno bailed for six months to tour with side project Team Sleep. It looked like 18 years of hard work had been flushed down the toilet. "I don't care how long we've been together, if you're gonna go to a show, and you're gonna see five guys doing separate things onstage -- not even acknowledging each other -- it's like, You know what? Fuck that," says Cheng. "Our whole thing from the start was to be friends and have fun making music. And to lose that, it was like, 'Well, wait a minute -- we just lost the main thing. Let's just not do it, or let's do it completely -- as friends."

Fortunately -- and without group therapy -- the Deftones worked through it, and based on a sold-out show I caught early in the current tour, the band sounds as tight as ever, blending battering riffs and haunting atmospherics to thrilling effect.