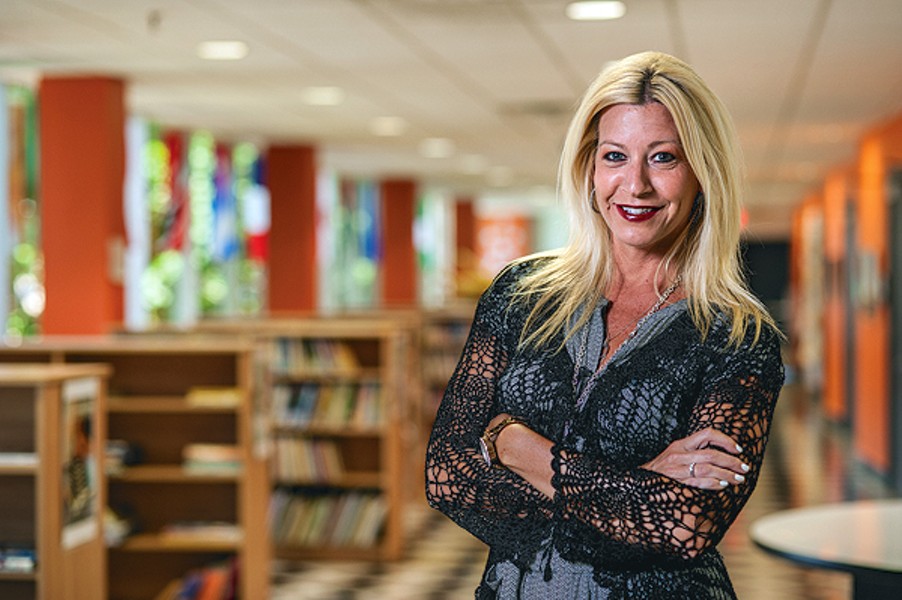 The principal of one of the most celebrated, innovative schools in Cleveland Metropolitan School District's portfolio grew up wanting to be a nurse. When Julie Beers' father suffered a massive stroke when she was only 5, she hated how he was treated and decided to commit her life to helping people. But two years in the nursing program at Kent State convinced her that medicine wasn't her vocation. Education was the avenue where she could help as many people, make as much of a difference, but not have to deal with blood on a daily basis.

"I feel like we were all put on this earth to do something, to do one thing," Beers says, "and for me I really feel that the school is it."

Campus International, one of CMSD's "portfolio schools," was the brainchild of CSU president Ronald Berkman and Mayor Frank Jackson. Jackson wanted a school in the heart of the city, a school to convince young professionals that when they started having kids, they didn't need to book it to the 'burbs. Berkman wanted a professional development program, a school that would ultimately feed top students into CSU.

Beers got tapped to lead Campus International after being a principal in Cleveland Heights for eight years. She'd done her masters work at John Carroll and taught for 13 years in the Shaker Heights school system before transitioning to leadership, a transition she thought she'd never make.

"I love teaching too much," she says. "But I'm one of those people who feel that you only really grow when you're not in your comfort zone."

That comfort zone was initially difficult to locate at Campus International. She thought she was walking into a dream job. She'd have total curricular control, she was told; she'd be able to hire her own staff. The reality was slightly different. She was responsible for renovating the "campus" herself, an old church building on Chester Avenue. She also had to actively recruit students and was limited to hiring folks who weren't getting laid off during CMSD's firing spree.

But she has created an oasis downtown. The school is currently K-6, adding one grade level (and about 80 students) per year in a lottery system, more than initial estimates. The school is an International Baccalaureate Program, though still adheres to the Common Core. Notably, students begin learning Mandarin Chinese in kindergarten.

Beers feels that though CMSD and schools around the state are constantly striving for improvement, one of the most consistent hurdles is finding ways to effectively report a school's success to the public.

"It's all based on one day a year," says Beers, of student testing, "and then you're slapped with a grade that's supposed to tell people how well you're doing."

Beers says that on tours of the school — she's given more than 5,000 since 2010 — parents often immediately ask what the school's grade is.

"And I say to them, 'I'll tell you our grade, because I'm proud of it, at the end of the tour.' And what everyone says — everyone says the same thing — is that they're so impressed with how engaged the students are."

"These kids need adults who believe in them. It's not just school lunches and nutrition and clothes. It's asking them where they're going to college early on. It's, when a 5th grader says he wants to be a professional basketball player, asking him about backup plans. It's knowing that these kids are our future."