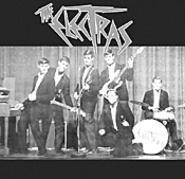 If you're looking for a reissue of a rare '60s garage-rock record, there are about 10,000 better than this. Only this one has Democratic presidential nominee John Kerry on it. Hence an original vinyl version of this album recently went for $2,500 on eBay. Musically, the Electras were just another bunch of suburban teens killing time by plucking out the inevitable surf instrumentals and '50s goodies. And if you think Kerry's speechifying is stiff, wait'll you hear his bass-playing.

True, this record was cut in 1961, and doing zippy versions of Eddie Cochran tunes then is tantamount to being a vanguard iPod-cut-'n'-paster today. So, respect. But it's a flat run-through anyway. More interesting are the liner notes; this CD has a cryptic quality to it that hints at conspiracy. There doesn't seem to be an actual title for the CD. "They're Back," "Rock and Roll Band," and "Reissue" all vie for space on the sleeve and spine. There is no label information, save something called "Waterston Communications, Inc.," which the press sheet refers to only as "our firm." The music's so bland that maybe this is another attempt by the vast right-wing conspiracy to sway that all-important demographic, the frustrated record collector, or "Goldmine Dads." It's too bad they didn't do a vinyl reissue, because rumor has it that if you play their version of "Shanghaied" backwards, the words "New Deal" and "Illuminati" can be heard. Hmm. [Reissue available from www.electrasrockandrollband.com.]