Rome falls again in a fine and frisky Forum. 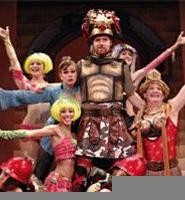 As scientists further explore the inner workings of our DNA, perhaps they will stumble upon a physiological explanation for why audiences always applaud a kick line. Set up a few actors onstage, get them to kick roughly in unison, and ticket-buyers clap as reflexively as Pavlov's dogs on a Snausage buzz.

Linear leg lifts are surefire crowd-pleasers, and that's also an apt description of A Funny Thing Happened on the Way to the Forum, the slapstick bundle of hilarious fluff now being presented by the Great Lakes Theater Festival. By combining a passel of vaudeville turns with a loose and bawdy plot involving scheming slaves and pompous patricians in ancient Rome, the comedy chestnut from the early '60s is brought to vivid life by a boisterous cast.

Of course, with a book by Burt Shevelove and Larry Gelbart (he wrote a lot of the TV series M*A*S*H), and music and lyrics by Stephen Sondheim, this is a hard show to screw up. But it can be done, since there's a tendency in such a no-holds-barred production to try too hard to be comical and wear out your welcome by the middle of the first act. This group, under the skillful direction of Victoria Bussert, never makes that mistake.

For all its crazy shenanigans, Forum actually has historical roots dating back to a Roman named Plautus, a playwright in the third century B.C., who wrote vulgar comedies to please audiences who got their jollies from watching vicious dogs tear apart a live bear chained in a pit. In short, these were not patrons primed for subtlety. So he filled his plays with gags, wordplay, and damn near anything else that would keep them in stitches.

In this updated version, the slave Pseudolus is trying to win freedom from his master Hero, the young and fairly dim-witted son of Senex and Domina. Hero has pledged to cut Pseudolus loose if the slave can hook him up with Philia, a comely courtesan (okay, hooker) from Crete, who appears tantalizingly in the window of the brothel next door. From that basic story are spun many zany subplots involving the kidnapped children of Senex's other neighbor, Erronius, who were stolen by pirates 20 years earlier; two fake Philias and one real one who's being pursued by various horny admirers; and a drag-queen tart who's built like Hulk Hogan.

The linchpin of all this chaotic revelry is Pseudolus, given an excellent portrayal by Tom Ford. In a role made indelible on Broadway by Zero Mostel and Nathan Lane, Ford works hard and shapes a number of funny bits, using Rolex timing to ignite his many punch lines (speaking of his master, Pseudolus whines, "Why did he have to fall in love with a religious Cretan?"). But a great comic must truly be absorbed in his absurd mission, and Ford always seems to be standing just outside his character, winking knowingly at the audience even as he cavorts onstage.

In the role of Hysterium, the dedicated slave of Senex and Domina who is prone to panic attacks, Jeffrey C. Hawkins is all exposed nerve endings as he trembles in fear of just about everything. Hawkins does a world-class swoon when he accidentally inhales a sleeping potion, and he's actually sweet when, dressed as Philia to fool Philia's new master, Hysterium taps into his feminine side. Aled Davies gives Senex a pleasantly randy outlook on life, while Laura Perrotta as Domina is a walking sight gag, with pendulous mammaries that look as if she's been breast-feeding water buffalo.

In a raucous show like this, the songs don't need to advance the story or help develop characters. So Sondheim has a blast with tunes that make sport of any topic at hand. The most familiar is the opener "Comedy Tonight," the most joyous and infectious musical kickoff ever: "Something convulsive/Something repulsive/ Something for everyone/A comedy tonight!" And the song he gives Philia expertly sketches her vacant personality, as she trills, "I'm lovely/All I am is lovely/Lovely is the one thing I can do." Kate Rockwell is indeed both lovely and amusing as this airheaded enchantress.

There are just a couple weak points in this powerful production: Matt Lillo, as Hero, has a singing voice too thin and soft to convey his ardor for Philia, and the gifted actor Lynn Robert Berg is oddly mellow and not particularly funny as the brothel owner Lycus.

But there are so many other laughs that it's not as though anyone would notice. Even Dudley Swetland, in the small role of Erronius, manages to squeeze chuckles out of this old man's doddering search for his purloined progeny. Of course, it all ends well in a show that promises "Tragedy tomorrow/ Comedy tonight!"