The Physicist Has Known Sin (Slowdance) 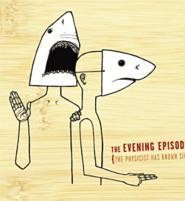 Sacramento's the Evening Episode copped the name of its debut from physicist Robert Oppenheimer and its sound from musical alchemists like Portishead, Stereolab, and Four Tet, among others. The result is brainy, cut-and-paste rock that blends the organic and electronic so assuredly that it often sounds like the group's been at it for years (it formed in 2004).

Disc-opener "High-Low" begins with programmed beats and computerized key bleats playing a simple child's melody, then piles on layers of guitars, keys, and vocals over the processed beats, building into a luminous conclusion. Elsewhere the formula is reversed; songs like "New Love" and "Nightmares" feature shimmering guitar glissandos and tightly coiled percussion dissolving into gentle song fragments built on loops and samples. "Learn Your Ps & Qs" burns hotter, not unlike Sleater-Kinney covering the Cocteau Twins. Teresa Eggers' vocals -- Hope Sandoval's narcotic slur crossed with Beth Gibbons' whisper -- float harmlessly over the programmed beats or squalling guitars, pleasant enough but without lasting lyrical effect. In fact, The Physicist glows most brightly during its instrumental moments, when the intricate programming is unencumbered by vocals or lyrics. Still, it's a promising debut from a young band worth keeping tabs on.