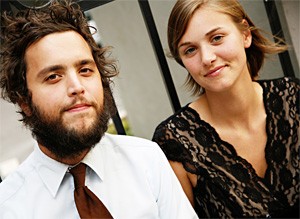 Their story may have started out like a fairy tale, but for Sam Quinn and Jill Andrews, a sad country ballad always seemed more suitable.

As the two singer-songwriters behind the Knoxville, Tennessee alt-country band the Everybodyfields, Quinn and Andrews have made one of the more intriguing and heartbreakingly honest breakup albums in recent memory. With an appropriate title to boot, Nothing Is Okay offers the rare opportunity to hear both sides of a failed relationship tell their story — often in ironically perfect harmony. For both Quinn and Andrews — interviewed separately for this story — the record was a chance to come to terms with their thorny past while paving the way for their band's future.

"I think the album just kind of made itself through the course of our lives," says Andrews, a painfully pretty southern belle with a voice to match.

"It was a real pain in the ass," counters Quinn, who has the laid-back look of a Hacky-Sack enthusiast, complete with a pair of muttonchops straight outta Neil Young's closet. "Everything was kind of falling apart there for a while. We had come so far with this thing, and now it was almost like seeing your child in intensive care, and everyone wants to pull the plug."

According to Quinn, the Everybodyfields finally came to that fork in the road on their way to a North Carolina gig in 2006. Split up and barely on speaking terms, Quinn and Andrews had to decide whether or not the end of their personal relationship would mean the end of their musical partnership too.

"Instead of deciding to break up the entire band and trash our plans, we decided to carry on," recalls Quinn. "Later, I approached Jill and said, 'Look, we need to make this record. How about we call it Nothing Is Okay and just make it about these problems?' The idea was for Jill to take her tunes and me to take mine, and just to do whatever we wanted."

Andrews agreed to give the concept a shot. After a series of tumultuous sessions in Nashville, Nothing Is Okay finally emerged last August as the band's surprisingly cohesive and intensely heartbreaking third album. "We were writing the songs separately," says Andrews. "But I think we knew that it would work together in the end. Sam and I, musically, are very entwined. We like a lot of the same stuff. We're influenced by a lot of the same stuff. So without hearing any of what he was writing, I knew what it would be. And I think he was thinking the same thing about what I was writing."

This deep understanding seemed to be present from the moment Quinn and Andrews first met in 1999, when they were teen counselors at a Methodist summer camp in the Smoky Mountains. When it came time for the duo to sing together around the obligatory campfire, something just clicked. "It happened with Jill so early on," recalls Quinn. "I realized, 'Oh shit, I don't have to tell this girl anything! I just have to show her a song, and she's right on it.' It was pretty amazing."

With a mutual love for cerebral twang artists like Gillian Welch, the Jayhawks, and eventually each other, Quinn and Andrews soon formed the Everybodyfields — a name borrowed from Quinn's childhood moniker for his backyard (à la Winnie the Pooh's "Hundred Acre Wood"). Initially based in Johnson City, Tennessee, the band released a pair of well-received CDs in 2004 and 2005, and was soon heralded as one of alt-country's new buzz bands.

Nothing Is Okay ranks as their best record, ripe with self-reflection, regret, and finally, acceptance. Eerily, each song includes backing vocals sung by the person it's about. "Because we were writing about the same situation, it's kind of like a call-and-response album," says Andrews.

"It was just a real hard record to make," adds Quinn. "If Jill and I weren't in a band together, we probably wouldn't talk for five years or something. So, just out of necessity, you can't really look at the person as being the same girl she used to be — sort of like Anakin Skywalker had to be killed off." He pauses for a laugh. "You know, Jill is mostly machine now."

Andrews acknowledges that it is indeed tough spending every day on the road — and every night onstage — with an ex. "But that's what we had to do to keep the band together," she says. "And now it seems like things are finally working themselves out. It's just an everyday sort of conscious decision to say, 'OK, we can still do this together.'"