The Fall and Rise of Machine Gun Kelly

From sex to booze to homelessness ... and now salvation and stardom 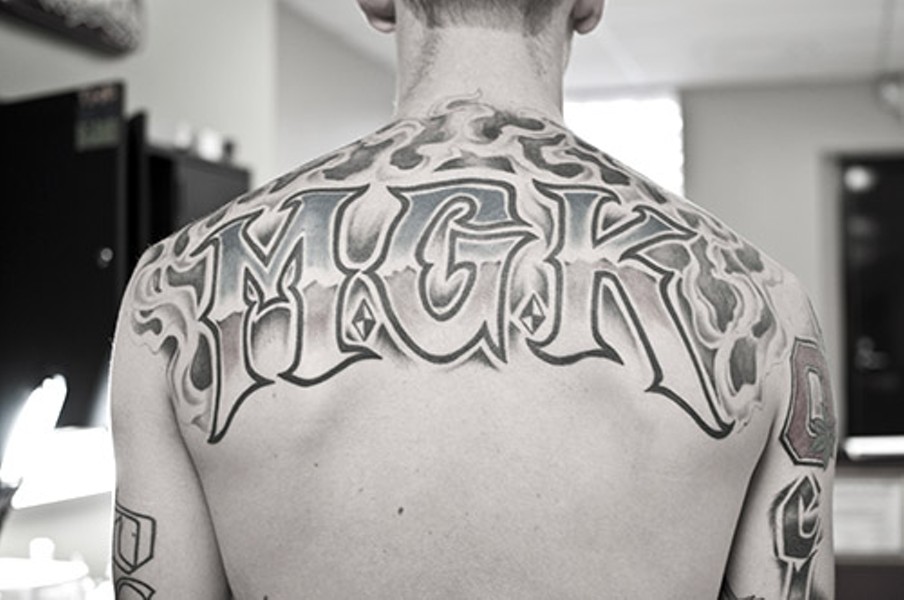 "That looks awesome," says the girl sprawled out on the cream-colored chair, the buzz of the tattoo artist's needle fading into the background like the blades of an ascending helicopter.

Glistening just below her breasts are the words "Lace Up" encased in a black outline of the state of Ohio. Leaning over her is Machine Gun Kelly, his arms covered in interlocking designs that seem to go on for miles. He's chatting with the girl about the Blink-182 concert where they met not 24 hours ago. She spotted Kelly sitting in the front row, and the two had a brief conversation before going their separate ways.

He never expected to see her again until he walked into Ohio City Tattoo, a nondescript parlor on Lorain Avenue that you won't track down unless you're looking very hard for it. That's where he found her, getting his motto etched under her tits.

She's hardly the only one. The Cleveland rapper's Facebook page and Twitter feed are bursting with fans posting pictures of their own Lace Up tattoos. The phrase calls for everybody to just be themselves, and it's become the mantra for what Kelly calls his "cult following," the group responsible for his meteoric rise over the past year. The 2010 release of his mixtape Lace Up (you were expecting something else?) strapped a jetpack to Kelly that's shot him in the general direction of international stardom. This summer he inked his first label deal, with Sean "Diddy" Combs' Bad Boy, an imprint of industry giant Interscope Records.

Kelly follows the well-worn script of the troubled young rapper being handed nothing and turning it into quite a lot. Born Colson Baker, he endured an adolescence on Cleveland's East Side that played like ghetto Monopoly: Here, the Chance cards read Get your ass out of Dad's house and You got jumped on the RTA. But the kid who came of age in Shaker Heights High School? There's very little left of him now.

"I think God had a plan for Lace Up," Kelly says. "I was making music to save myself, and it ended up saving everybody else."

The needle begins to whir again as Machine Gun Kelly takes his turn in the chair, his bare chest exposing what must be hundreds of tattoos all huddled together on a sinewy frame. A spider's abdomen encircles his right nipple. Pac-Man chases a yellow dot across his collarbone. The name "Casie" — the two-year-old daughter he had with his onetime girlfriend — runs along his rib cage in black ink, the lettering rendered in swooping cursive.

Today, Kelly will add the words "Locals Only" just below his ribs. It will be done up — like almost all of his bodywork — by Alfonso "Cev" Ceven, the owner of Ohio City Tattoo. Like the "216" that runs down his right arm, the latest ink is yet another glimpse into the complicated web that is Machine Gun Kelly's life and the city he was unceremoniously dropped into — the one he, unlike other icons before him, refuses to leave behind.

But it took Kelly a while to morph into the honest, loyal, filthy-mouthed storyteller he is today. Onstage or off, in person or on Twitter, he struggles to string together more than two sentences without muttering a "fuck" here then a "motherfucker" there. His descriptions of his sexual exploits — whether beamed out online or scrawled into a reporter's notebook — should come with their own TV-MA rating.

In spite of all that, he is well spoken, he's prolific, and he's as worldly as a man of 21 could likely be. Born in Houston, he took on the life of a nomad, following his father on a series of odd jobs and missionary adventures in places like Germany, Egypt, and Chicago. When Kelly was nine, his mother ran off with a college professor she'd been screwing for some time. So he lived solely with his dad, whom he remembers as a son of a bitch whose temper overflowed if young Colson so much as held his pen the wrong way. The two often got into verbal altercations that escalated into violence.

"He grew up without a father," Kelly says of his dad, his tone turning conciliatory. "His father got shot in the head in front of him. That would fuck me up for life too.

In 2004, when Kelly was 14, another of Dad's new jobs delivered the splintered family from Colorado to Cleveland. He arrived with little more than music for encouragement, his emerging style of rap an amalgam of the artists who clearly influenced him: His lightning-strike delivery harked back to early DMX, his witty punch lines and emphasis on specific words echoed Ludacris, and the openness with which he rhymed about his already sordid past conjured Tupac.

After failing his freshman year in Colorado, Kelly's Cleveland schooling began in classes filled with kids a year younger than he was. As a sophomore roaming the halls of Shaker Heights High, Kelly could have been mistaken for a modern-day monk. His blond hair, buzzed to almost nonexistence these days, back then unraveled to his shoulders. Headphones hugged his ears tightly and a fuck you expression had settled permanently across his face.

He was an awkward, antisocial white kid trying to rap in a predominantly black school, and he became an easy target for fights, robberies, and whatever else fellow classmates threw his way.

"I remember in math class one time, this kid came up and just balled my shit up, threw it all on the fucking floor," Kelly says. "That was a huge memory for me, when this kid threw all my raps on the floor.

"And it's the same kid now — he's always at our parties," he adds with some measure of satisfaction. "He'll always beg me for stuff."

As Kelly stumbled from his sophomore into his junior year, he worked harder at getting his name out on the music scene than he did in any of his classes. He would play small shows at the Grog Shop and Peabody's, and he would rap 60 bars for anyone who would listen, in hopes they would buy a ticket.

Those who took the bait were treated to raucous affairs, complete with Kelly crowd-surfing, mounting speakers and ledges, and dancing about as if he were succumbing to a seizure. If it was Colson Baker who first took the stage, it was Machine Gun Kelly who strode off it.

"I was hungry, man," he says. "I was so fucking hungry." At around the same time, he took a job at an airbrush shop at Tower City, where he would pass out his music to customers and begin to build word of mouth.