To heck with service and atmosphere -- Agostino's is all about the food. 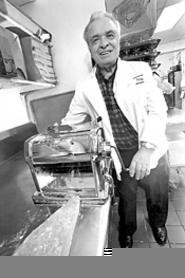 Before you rush out to Agostino's, a family-owned and -operated Italian restaurant in Brooklyn, a little dining-related values clarification may be in order. Ask yourself, for instance, how important an atmospheric interior and plush appointments are to your dining pleasure. If the answer is very important, proceed with caution: Despite being notably clean and tidy, the decor at this restaurant/party center has all the charm and personality of . . . a party center. Next, ponder this: How essential is polished, professional service? If the answer is extremely essential, consider making other plans: At least during our visits, Agostino's staffers ranged from confused to downright inattentive.

But chew on this too: Would dainty, silken ravioli, stuffed with lobster and slathered with a tongue-hugging cream sauce, compensate for even the most neglectful service? Would you gladly trade all the alabaster lampshades and Limoges china in the world for a plate of perfect penne in a bright, summery marinara? If you can answer those questions in the affirmative -- in other words, if food is what rocks your world -- then Agostino's will make you smile.

Long, low, and in close proximity to the street, owner Joe Gallo's 120-seat restaurant is relatively nondescript from the outside. And inside, not surprisingly, the decor doesn't suddenly go glam. Bright ambient lighting, from recessed canisters in an acoustic-tile ceiling, shines down on white-cloth-topped tables, where most of the little glass-shaded oil lamps wait in vain for someone to take a match to them. Chocolate-brown and black chair rails bisect crisply painted caramel-colored walls, but nary a painting, photo, or objet d'art adorns those barren expanses. Heavy vinyl-and-aluminum chairs are comfortable, but look bulky and institutional. And with no physical barrier separating the smoking and nonsmoking sections of the smallish main dining room, nearly everyone is treated to an occasional whiff of secondhand smoke.

On the other hand, when the main dining area starts to fill up, two additional dining rooms (primarily reserved for banquets and private parties) are pressed into service for overflow seating. And being assigned a table in one of these mostly unpopulated spaces can feel like being exiled to Siberia -- especially on Saturday evenings, when the Neapolitans (Mark Delia on guitar and 84-year-old Joe Cornell playing killer mandolin) are sequestered, out of sight, in a corner of the main dining area. It's a good thing, then, that within this functional but impersonal setting, Agostino's freshly made pastas shine like Botticelli's "Venus" and compensate for what the space lacks in physical beauty.

After all, the world (and perhaps even your kitchen) is filled with flaccid fettuccine and limp linguine: low-quality, overcooked noodles that have all the flavor and texture of gruel. But Gallo and his culinary staff (including his dad, Tony, who arrived here from Calabria in 1954) know far better: Their pastas are delicate, firm, almost nutty, and cooked just a second or so beyond actual crispness; and they have such character that they could be eaten with a mere brushstroke of olive oil and a drift of freshly grated Pecorino Romano cheese, and still taste heavenly. So when they are paired, instead, with one of the kitchen's fine, complex homemade sauces, it is a thing of beauty, indeed.

Sturdy lasagna noodles, for instance, were irresistible when layered with an exceptional meat sauce: savory, rich, but entirely lean, its texture lightened with chopped hard-boiled egg whites and shredded mozzarella. We couldn't put down our fork until the last plump cavatelli, tossed with meaty Bolognese and capped with melted cheese, had been dispatched. And those sheer, toothsome lobster-stuffed ravioli? We ate every one, then sopped up the final glistening droplets of roasted-red-pepper cream sauce with pieces of bread.

Linguine with white clam sauce was another hit: the pasta slightly resistant and the sleek, buttery sauce studded with tender chopped clams. For added luxe, six fresh clams, in the shell, ringed the plate. And while chicken Marsala was good -- the meat fork-tender, the sauce heady, translucent, and barely sweet -- what really grabbed us was the side serving of penne, in a chunky marinara as refreshing as an August tomato.

In fact, the pasta dishes were good enough that we barely explored the remainder of the menu. The filet mignon, the lobster tail, the veal piccata, and the lemon-basil chicken -- all will have to wait for another day. We did, however, make time for the deep-dish vegetarian 'za, with its tender, yeasty crust and filling of chopped artichokes, black olives, green pepper, mushrooms, and roasted red pepper, bound by a bit of mild tomato sauce and hint of melted cheese. In a word, it was delish, without a trace of greasiness, and full of pure, healthful flavors.

Starters, though, were somewhat less impressive. We were intrigued by an unusual olive appetizer, which the menu described as "our own olives stuffed with seasoning and imported cheese." So we were surprised when the dish turned out to be a battered and deep-fried number; and while the breading possessed a crisp, salty seductiveness, the olives themselves seemed lost inside it. On the other hand, big curls of lightly floured, "crispy" calamari were scarcely crisp at all; and other than what was contributed by the zesty marinara, the tender squid was mostly flavorless. Italian wedding soup was standard stuff, with plenty of tiny beef-and-veal meatballs, birds'-tongue pasta, and escarole in a bland chicken broth. And although bacon-wrapped scallops on a bed of marinara were lush and mellow, they were accompanied, inexplicably, by a taste-bud-jarring sweet-and-sour sauce.

Dinner entrées are moderately priced at around $13 to $23, and come with a loaf of warm, light-textured bread; herbed dipping oil; and a cool, crisp tossed salad with smooth housemade balsamic vinaigrette. For an additional 75 cents, the kitchen will toss on a handful of crumbled blue cheese or shredded mozz; the tasty additions are certainly worth the paltry extra charge, but we wish our servers had mentioned it when they offered us the option.

And this wasn't the only time that we wished for more polished service. Ordering wine became a chore, for instance, when our apparently untrained server couldn't remember what we wanted long enough to turn in the order: She returned to the table three times to have us repeat it. Desserts (a perfectly light, indulgently rich tiramisu, by the way, and a fine, freshly filled cannoli) were served while soiled entrée plates still cluttered the table. Water refills simply didn't happen. And when a Saturday-night waitress asked if we wanted more iced tea, she was presumably just taking a survey, because she never returned with more.

But that's how it goes at Agostino's, where in the end, it's all about the pasta. And for another bowl of that cavatelli, say, or a slab of rich lasagna, we would probably be willing to fetch our own beverages all evening long.