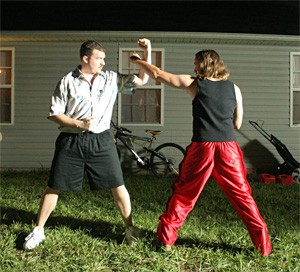 The Foot Fist Way has been trying to break into theaters since clawing its way down film-fest row, starting at Sundance in '06. It took Will Ferrell and his comedy-life partner Adam McKay to get distributors interested. As the trailer notes, they "watched it at least 20 times."

It's easy to see why Ferrell and McKay were attracted to first-timer Jody Hill's film about delusional, sad-sack tae kwon do instructor Fred Simmons: He's more or less Ron Burgundy in a white robe and black belt, Ricky Bobby with a porno mustache. Played by Danny McBride, Fred is a strip-mall hero for whom showing off his cinder-block-breaking skills to parking-lot gawkers is "my fucking life." But Fred's less like Napoleon Dynamite's martial-arts nimrod Rex Kwon Do and more like Chiwetel Ejiofor's Mike Terry from David Mamet's recent Redbelt: an instructor who takes seriously — or at least talks seriously about — the tenets of his combat technique while being completely oblivious to what happens just outside his storefront kingdom. He considers himself a warrior; meanwhile, the world is kicking his ass left, right, and sideways.

The Foot Fist Way — a rough English translation of "tae kwon do" — is shot mock-doc style. It's probably best that way, since nothing much happens in the film as it ambles from episode to episode. (It would have made a tremendous series of Web-isodes.) There's only the loosest of plots, involving Fred's bleached-blond wife (Mary Jane Bostic), who keeps among her "work papers" a few xeroxes of her chest and ass, made around the same time she gave her boss a handjob — which, c'mon, she figures is really no big deal. The revelation of her infidelity sends Fred into a tailspin, though it really just inspires him to act like a bigger douchebag.

Unlike the rubes in Ferrell's sports-comedy canon, Fred's not entirely feckless: He knows his shit, or at least sounds like he does. But he's also mean-spirited and boorish. He commands his students to live by the five tenets of tae kwon do — courtesy, integrity, perseverance, self-control, and indomitable spirit — but exhibits nary a single hint that he actually knows what those words mean. He barks at — and even swings at — children, makes wholly inappropriate and painfully uncomfortable passes at would-be female students, and occasionally condones the use of violence toward the elderly during sparring sessions. You can almost understand why his wife fucks around on him: The guy's a total asshole.

Which is why, halfway through The Foot Fist Way, it struck me that the film's writers (Hill, Ben Best, and McBride) didn't intend this as comedy at all, but as tragedy — the McKay-Ferrell franchise turned inside out. Ferrell and McKay have made their bones collecting egomaniacs whose success is directly disproportionate to their self-awareness. Only they serve up their dunce-cap heroes as ineffectual clowns, usually humbled by slapstick circumstances: the curse word on a teleprompter, a figure-skating mishap, an underwear-clad meltdown on a racetrack.

But Fred's a whole different brand of dope: There's very little to like about him, and I have my suspicions that McBride and his collaborators actually don't. Fred is immune to humbling — not even a proper ass-kicking, for which he's begging, sets him straight. And McBride, whose burgeoning career in such films as Hot Rod and Pineapple Express began with this performance, resists any effort to make us root for the guy. It's not even a question of liking Fred; it's more a matter of tolerating him.

A colleague insists The Foot Fist Way is just another Napoleon Dynamite, a condescending portrait of the fringe-dwelling loner. But it's far more resonant than Napoleon, because Fred is far more than just some exaggerated dweeb or spastic bore, and McBride doesn't play him like a cartoon character. There's something real about this guy — and something real nasty about him too, something that lingers after the movie's choked a few laughs out of an audience that won't know whether to pity Fred or punch him. Truthfully, The Foot Fist Way is no different from an episode of Curb Your Enthusiasm or The Office: This is irritainment, something you snicker at while cringing and covering your eyes, praying that this guy never gets loose in the real world, when in fact he's your next-door neighbor. Or, God forbid, you.