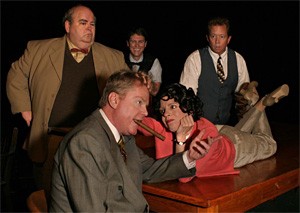 Anyone who's seen the classic sketches from Sid Caesar's early 1950s TV series, Your Show of Shows, knows the attraction of capturing that sublime era in comedy. That's exactly what the musical comedy My Favorite Year, now at the Beck Center, tries to do.

And even though nothing here approaches the manic hilarity of Caesar's epic This Is Your Life parody, say, there are enough engaging performances at the Beck to carry an evening.

The show is based on the film of the same name, which starred Peter O'Toole as the soused and skirt-chasing Alan Swann, a guest star on King Kaiser's Comedy Cavalcade. This musical version, written by Joseph Dougherty, is only occasionally humorous. Of course, when you're trying to be as witty as Sid Caesar's writing team — which included Woody Allen, Mel Brooks, and Neil Simon — you're sailing into a gale-force creative headwind.

The central character here is Benjy, who's played with earnestness if not inspiration by Shawn Galligan. Benjy is a young writer on King's staff and a closet fan of Swann, a cinema star in the John Barrymore mold. When Swann shows up four sheets to the wind, Benjy is assigned to babysit the actor, so he doesn't turn up shit-faced on live television.

The songs, by Stephen Flaherty and Lynn Ahrens, get off to a bright start with "Twenty Million People" — a delightful ensemble tribute, choreographed with style by Martin Cespedes, which references early television's massive impact on the country. But as the show progresses and Swann mopes about his shallow life, the tunes turn introspective. Still, Matthew Wright brings a matinee-idol elegance and bruised innocence to this lascivious lush.

Among a strong cast of supporting characters, Rachel Spence dazzles as comedy writer Alice Miller, nailing her Imogene Coca-like character with a penetrating voice and impeccable timing. Her showstopping "Professional Showbizness Comedy" would have been a perfect Coca-coda to the evening, if the writers had stopped trying to fashion Swann into some sort of tragic figure, dripping with psychological import.

Under William Roudebush's crisp direction, Jean Zarzour harnesses her talents to create a larger-than-life but charmingly intrusive Belle, Benjy's mom. And John J. Polk manages to bluster his way through his scenes as King Kaiser.

This impressive Beck production conveys the appearance of a bustling TV soundstage, with the exception of King Kaiser's circular show sign, which, oddly, is rendered amateurishly instead of with slick period lettering. But most other details are well attended to, making Favorite an enjoyable trek back to TV long before TiVo.