The Gift of Gab

Sunday, September 27, at the Grog Shop. 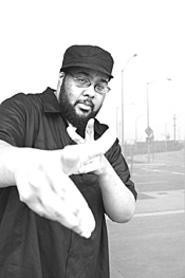 Blackalicious's Gift of Gab looks pretty plain when the bespectacled MC takes the stage in a hoodie -- no bling, no Kangol, no alpha-dog attitude. And he definitely doesn't look like one of the most nimble men on the planet. But when his mouth starts to move, he spits like few others. Rooted in San Francisco's Quannum collective (DJ Shadow, Latyrx), the two-man crew broke into the national spotlight with 2000's Nia, establishing itself as the new-school act that makes jaded old-school fans feel good about hip-hop.

Producers Jake One and Vitamin D, surprisingly, are able to fill in for Blackalicious's singularly gifted Chief Xcel, approximating Nia's chill vibe on Gift of Gab's solo debut. 4th Dimensional Rocketships Going Up draws on funk to create tracks with more conventional hip-hop sound. Beats fall softly and keyboards float by, while bass lines roll from one speaker to the other. Gab keep his rhymes conscious and positive. And for once, a rhymer's life-affirming album notes match his lyrics. Dazzling delivery or no, it's not flashy; it's just good.