The Good, the Bad, and the Passed Out: Two Bartenders Spill on What it's Like to Work Behind the Bar on St. Patrick's Day 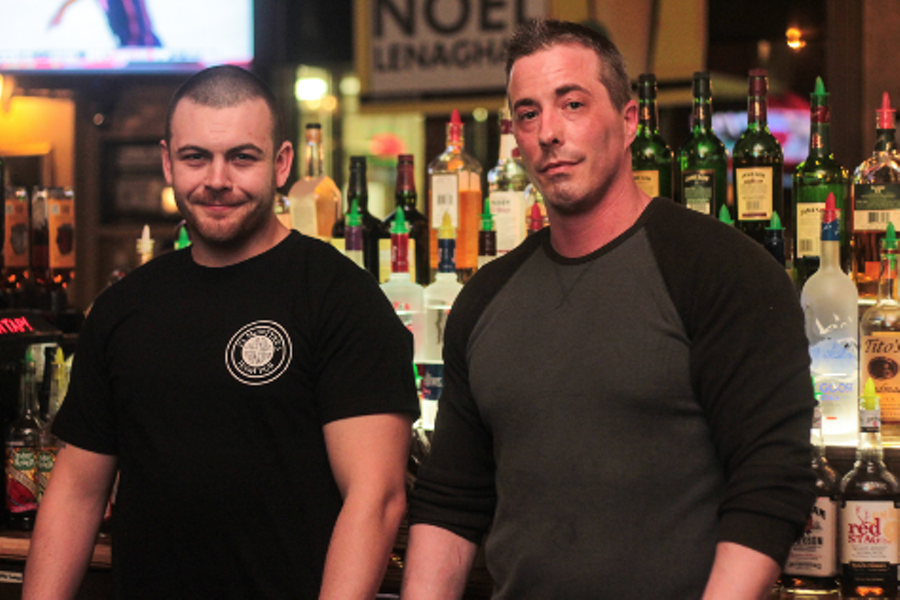 If you're the type who sets an iPhone alert for St. Patrick's Day, or boasts a beer gut deserving of its own Jenny Craig account, there's a chance you might actually go the full 18 to 20 hours of drinking that many associate with March 17.

But could you last that amount of time behind the bar on that day?

That's precisely what Doug Reuss and Adam Wendorff have done for more than a decade, particularly the past six and a half years at PJ McIntyre's Irish Pub. The guys really didn't know what it meant to work on the holiday until they got hired at the popular Kamm's Corners bar, but thousands of green wigs and puke puddles later, they know that no other day even comes close to St. Patty's Day in West Park Station.

Reuss and Wendorff gave Scene an inside look at the good, the bad and the passed out.

Reuss: Well, it's mandatory for everybody, but I'll tell you what: You better prepare yourself mentally. You're going to meet people you'll only see once a year, and you see the craziest things on St. Patty's Day. You see some good things and you see some craziness, but that's what St. Patty's Day is all about. We open at 6 a.m. and we're packed by 6:01 a.m. It's just non-stop.

Your first couple of years, were you not as mentally prepared?

Wendorff: It's pretty much the equivalent of retail and working on Black Friday. I just remember running as fast as I can for hours on end, trying to keep up. Let's be honest, some people must just be a mess.

What gets left behind?

R: I guarantee you that there are going to be 30 to 50 credit cards left here.

R: The best is finding somebody passed out on the toilet. I go to use the employee bathroom last year, and wondered, "Why is this locked?" Some girl was passed out in there. Thank god I found her and not some drunk person. It happens at every bar, but man ...

What are some other bizarre moments you can recall?

R: We had the Cleveland Rovers Rugby Club here and all of a sudden they sang "The Star-Spangled Banner." There's like 40 of them who sang it before they left. That's how they say goodbye to everybody. They asked us to turn the music down, sang "Star-Spangled Banner" and then they all left. They're great guys, but I've never seen that one before in 15 years of bartending. No one said a word. I actually saw someone take a hat off.

What do you see more of, puke or passing out?

R: Puking, by far. I saw a husband puke all over his wife at 11 a.m. Usually at night, that's when you see people pass out. Guarantee you, there will be 10 people sleeping at one point in time. And throw up, too. I feel bad for the cleaning guy.

W: That's the worst job on Earth, right there.

R: I don't know how he does it. But that's the one day of the year when we have two to three cops here and a of bunch door guys because you know what? It happens. People get drunk, and you are a different person when you're drinking. So, we make sure there's no violence and you make it outside nicely.

How much beer do you sell throughout the day?

R: Every year, there's usually a smaller person that's dressed up as a leprechaun. He jumps on the bar, runs down the bar. You're not paying attention, you look out of the corner of your eye and, "Oh, my god, it's a leprechaun!" And then you realize it's just some drunk guy.

The money must be pretty good. How much more are you hauling in than normal on St. Patrick's Day?

R: You're making four to five times what you would normally make. It's tough, though. There are breaking points where you have to step back, maybe walk away for five minutes because you have nonstop people yelling at you. So, you get your thoughts together and go back to doing your job. It's good money, I won't complain, but I do look forward to March 18, sleeping in and not even worrying about anything.