With Slipknot promoting a new concert album, we highlight some all-time-best live discs. 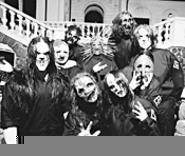 Slipknot might be the only modern band that regularly draws to its shows spectators who are ambivalent about its music: Its fright masks and chaotic choreography lure spectacle-curious rubberneckers, who observe from the fringes.

Slipknot's upcoming two-disc concert set, 9.0 Live, might not hold the same appeal for outsiders, but it figures to be a worthy complement to the group's discography, since it's never quite found a way to recreate that hitting-a-beer-keg-with-a-metal-rod percussion sound in the studio. Slipknot's live album will immediately become the strongest any nü-metal band has produced (though this is largely a default honor) and will be promoted with a small-hall tour that'll see the band hitting House of Blues this Sunday. Still, Slipknot's concert discs might have a tough time cracking this list of the best-ever live recordings, organized by the festival or venue with which they'd most likely be affiliated.

Judas Priest, Unleashed in the East (1979): Rob Halford's screaming -- for vengeance or otherwise -- never sounded better than on this early-era effort.

Kiss, Alive! (1975): A band in its creative prime (its studio high-water mark, Destroyer, would arrive the next year), Kiss plays bombastic party anthems for its jubilant army.

Motörhead, No Sleep 'Til Hammersmith (1981): No Sleep plays best on vinyl, without the CD track separations that create the only pauses during this pummeling program.

Slayer, Decade of Aggression (1991): The "Slayer!" chants of music's most disturbingly devoted fan base rival Dave Lombardo's drumbeats as this set's most striking feature.

Allman Brothers, At Fillmore East (1971): The 2003 repackaging unites the seminal Fillmore sets with additional material, culled from other performances at the venue, that had appeared on different releases. The result is a startling overview of the concerts that brought improv-jazz sophistication to southern rock.

Ray Charles, Live (1990): Piecing together sets from 1958 and 1959, Live crackles with call-and-response chemistry, especially during the exhilarating closer, "What'd I Say."

Miles Davis, Live-Evil (1997): Working with a band that included Keith Jarrett, Davis concocted the heaviest set of his fusion period, all hard-funk beats and high-speed blasts.

B.B. King, Chronicles (2005): This boxed set compiles three essential recordings (Live at the Regal, Live in Cook County Jail, and Blues Is King), all of which display an unmatched connection with the crowd. King's listeners hang on his every word, and when he delivers a punch line ("I gave her seven children, and now she wants to give them back"), the response rivals stand-up comedy's most raucous recordings.

Nirvana, MTV Unplugged in New York (1994): Kurt Cobain's shivering sigh toward the end of a rousing Leadbelly cover might be the band's most emotional recorded moment.

Pearl Jam, Live 07-11-03 Mansfield, MA (2003): Fan-friendly or not, Pearl Jam wouldn't release hundreds of live records unless it was justifiably proud of its onstage style. This three-disc monster, which opens acoustically and shifts into double-time sprints, is the best of the bunch.

Bob Marley, Babylon by Bus (1978): Working with the Wailers, Marley blazes on the back-to-back tracks "Rebel Music" and "War."

Johnny Cash, At Folsom Prison and San Quentin (1975): Perhaps the most compelling rapport in live-album history is the one the charismatic Cash forms with rowdy inmates.

Elvis Presley, NBC-TV Special (1968): Presley pulled his career out of the fire during a performance that's become shorthand for surprising career resuscitation. Far less worthy, yet morbidly interesting from a tragicomic standpoint, is Presley's Having Fun With Elvis on Stage, on which he becomes the King of bad comedy.

Bruce Springsteen, Live 1975-1985 (1986): Springsteen recorded his best albums solo, but he thrives live with the support of his freewheeling E Street Band. This boxed set draws from dozens of gigs to replicate the experience of one exhausting 40-song stand.

The Who, Live at Leeds (1970) and Live at the Isle of Wight Festival (1996): Both shows contain entire performances of Tommy, with prime percussive flourishes from Keith Moon. Leeds sets a new standard for high-volume excellence, and Wight maintains that electricity while making room for a broader selection.

Vandals, Sweating to the Oldies (1994): An earlier edition of the Vandals had written these songs, and as the new members sped them up with a savage smile, they closed a chapter on the band while confidently announcing their arrival.