Local scribe looks back on a quarter-century of stories. 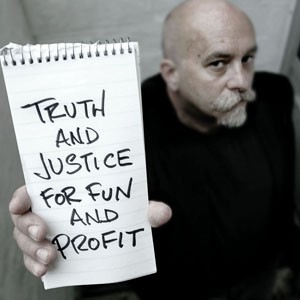 The Plain Dealer’s “Minister of Culture” Michael Heaton has written thousands of human-interest articles over the past 25 years. Yet he claims it didn’t take much time to handpick the three dozen pieces that make up his new book, Truth and Justice for Fun and Profit: Collected Reporting. “I was looking for stories that had that cinematic quality -- that narrative arc with the perfect beginning, middle, and end,” he says. “They don’t come along every day. You’re lucky if you get one or two a year. And when you do find them, you say to yourself, ‘Don’t fuck it up. Stay out of the way of a good story that’s right there in front of you.’”

The essays range from a 1983 story about a Cleveland priest who saved kids in war-torn El Salvador to last year’s 10-part series that chronicled the late sportscaster Casey Coleman’s bout with pancreatic cancer. On a lighter note, the book also includes Heaton’s piece about a group of guys who regularly partied near the Rocky River Yacht Club during the ’80s. “I spent a month drinking beer and reminiscing with them,” says Heaton. Truth and Justice for Fun and Profit also features articles about chef Michael Symon, concert promoter Packy Malley, and American Splendor writer Harvey Pekar. They’re balanced with tales starring local mobsters, fugitives, and crime-fighters. “I hope the book is a celebration of journalism,” says Heaton. “I hope it’ll make people appreciate newspapers, magazines, and the people who work at them.” He'll also appear at 7 p.m. Tuesday at Joseph-Beth Booksellers, 24519 Cedar Road in Legacy Village in Lyndhurst (216-912-1981; www.josephbeth.com).
Sun., Oct. 21, 2 p.m., 2007