The Hives are buzzing again, thanks in part to hip-hop producer Pharrell 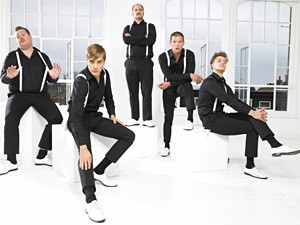 It isn't rocket science. Hell, it isn't even data entry. It's rock and roll. And the Hives know damn well that what they do requires little brain juice and even less technical training. As Sweden's best garage band, they understand that three chords, maximum, are all they need to make some glorious noise.

The Hives have been making that noise for 15 years. It took nearly a decade — and a garage-rock revival — to place their name on the lips of fans of fast, loud, and straightforward music. Since then, they've been as reliable as the Ramones used to be, delivering loud-as-thunder stomp-and-roll albums every couple of years or so.

Never mind that all their records sound the same. Very few bands seem to enjoy recycling the same three chords as much as the Hives. There's certainly no other band that gets off on performing them live. "There's a lot of time when you're sitting around doing nothing [when you're recording]," says guitarist Vigilante Carlstroem. "It's kind of boring, especially after a couple of months in the studio. But recording music makes touring fun."

On their latest CD, The Black and White Album, the Hives — Carlstroem, singer Howlin' Pelle Almqvist, guitarist Nicholaus Arson, bass player Dr. Matt Destruction, and drummer Chris Dangerous — enlist superstar hip-hop producer Pharrell Williams for a pair of songs. But Pharrell — the mixmaster behind such hits as Britney Spears' "I'm a Slave 4 U," Nelly's "Hot in Herre," and Snoop Dogg's "Drop It Like It's Hot" — doesn't give the band an extreme makeover. In fact, the Hives pretty much stick to their two-chords/two-minutes principle throughout the album.

A mid-song breakdown in "Well All Right!" and the disco-clompy "T.H.E.H.I.V.E.S." are the only indications that Pharrell's space-age funk paid a visit to the retro rockers. "We did three records before this one, and they were all done in the same way with the same people in the same studio," says soft-spoken Carlstroem. "This time, we wanted to try to do things a different way: work with people we wouldn't usually work with and try new things.

"We met Pharrell a few years ago, and he told us he wanted to work with us. We figured, what the heck? Let's try it and see how it would turn out. We recorded about seven or eight songs with him, but we didn't want it to be a Pharrell-and-Hives record."

Four albums into their career, the Hives sound refreshingly stationary. As other artists throw their fans curveballs in the form of double-disc concept records about the hardships of being famous, the Hives continue to shoot off a dozen songs about their all-time-favorite subject — rock and roll. "We're influenced by music that we've liked our whole life and songs we hear on the radio," says Carlstroem. "You get a lot of American music in Sweden ever since the '50s. That rock-and-roll culture has been around Sweden as long as it's been in America."

The Black and White Album includes the usual amps-to-11 and randomly tossed-out rhymes: "When times are hardy — Giddy up!/We throw a party — Giddy up!" represents the new album at its most enthusiastic. But dig a little deeper, and you'll hear Almqvist getting positively subversive in cuts like the explosive opener, "Tick Tick Boom."

And that's been the Hives' little secret from the start. They make it all sound so simple, yet they prod and nudge their songs toward some sort of significance. You can say the tunes are political — there's a sense that Armageddon is just a guitar solo away — but you can also note that they, like their creators, just don't give a damn. It's that whole dancing-while-cities-burn ethos. "We don't take things too seriously," says Carlstroem.

The Hives formed in Fagersta, Sweden, in 1993. Their matching black-and-white suits, which the group sports in videos, on album covers, and in concert, were always part of the plan. So were the stage monikers (no — Vigilante, Arson, Destruction, and Dangerous aren't the guys' real names). According to the band, there's also a never-seen sixth member — Randy Fitzsimmons — who allegedly came up with the group's image and writes all of its songs. This is most likely bullshit.

The Hives' debut album, Barely Legal, came out in 1997. But it wasn't until 2000's Veni Vidi Vicious was re-released in the U.S. two years later — during a White Stripes- and Strokes-led rock revival — that the Hives became a genuine buzz band. "Hate to Say I Told You So" was a radio smash, and the group toured and played sold-out shows across the globe for more than a year.

Tyrannosaurus Hives, from 2004, was more of the same. Last year's The Black and White Album, says Carlstroem, was a chance to stretch a little — hence the Pharrell hookup. But even Carlstroem admits that all the studio tweaking in the world isn't going to change the Hives' primitive noise bombs. "We wanted the new record to sound more cut up," he says. "If you don't change, people complain. And when you change, people complain. But it's still the same. Most of the new songs are like regular old Hives songs."

That sound — cribbed from the Stones, the Stooges, and about a hundred other classic bands from the '60s and '70s — is just a natural fit for the Hives. They may be Swedish, but they play some of the most authentic American rock and roll of the decade. "We have a lot of time to practice, with our long, cold winters," laughs Carlstroem. "There's no limit to [three-chord guitar rock]. You can use as many chords as you like, but the best songs are the easy ones."