Cleveland's cable fixer-uppers hang out at the Home Improvement Show. 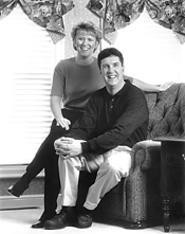 "We come into your home, do what we have to do, and then leave." Since 1994, he and Shari Hiller have revamped approximately 300 rooms on-camera. Seventy-five million households see the Cleveland-based program, aired daily on the cable network. "We never expected it to get this big," Fox says.

Fox and Hiller will appear at the NARI Home Improvement Show Friday, February 1, at the I-X Center, dispensing tips and advice. "Our motto is, if we can do it, you can do it," explains Fox. In addition to Fox and Hiller, the Home Improvement Show features more than 400 exhibits and hundreds of seminars aimed at home fixer-uppers. "Most of the time, we're doing stuff as easily as possible," Hiller says.

Fox and Hiller met a decade ago, when both were working for Sherwin-Williams. The paint giant eventually footed the bill for the half-hour program, which features the two Kent State University graduates rebuilding, redecorating, and refurbishing bedrooms, basements, kitchens, and what seems like an endless supply of kids' rooms. Moreover, all of the places featured on Room by Room are local.

"We decorate for real people who are in real homes with real challenges and real budgets," Hiller says. "We look for interesting rooms and interesting people," Fox adds. "And folks who are willing to have us and a TV crew in their house for two weeks. We consider the homeowner a client. We don't just come in and do a TV show. We actually do the work in the rooms."

"Some of the other shows come in and do the two walls you can see on camera and then split," Hiller says. "Not us. We do everything."