The Hush Sound rebounds, with its piano player now doubling as lead singer 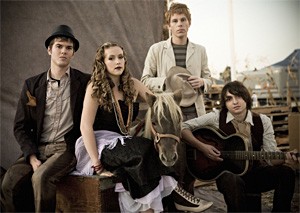 A couple of years ago, the Hush Sound was just another boy-girl emo band from Chicago that landed a deal with Pete Wentz's record company. The four kids, all barely out of their teens, did the usual bump-and-grind with the industry: They released a couple of albums, they made videos, they toured, they almost broke up.

"We were a bunch of kids at the time," says singer and pianist Greta Salpeter, who's 20 now. "We were put in a van and were driving 10 hours a night and running on no sleep for months at a time. We were all exhausted. We never lived together, we had never toured together, and we didn't realize the sensitivity you have to have toward each other to make it work."

All of this came down after 2006's Like Vines, which — like the previous year's debut, So Sudden — balanced Salpeter's written and sung songs with those written and sung by her guitar-playing bandmate Bob Morris. But Morris, who comes from the Panic-at-the-Disco school of over-emoting emo, would always grab the biggest piece of the records for himself. After all, in a way, it was his band. Sure, he formed the Hush Sound with Salpeter when they were in their teens (Morris was a high-school sophomore; Salpeter was three years behind), but he always assumed the role of leader.

"When I write songs that are very self-indulgent, I put them aside and say, 'Those are for me later,'" she says. "I write very much with the boys in mind."

Goodbye Blues is loaded with Salpeter's piano-propelled songs about medicine men, sticky-sweet honey, and love that rocks you like a hurricane. Salpeter, coming off like Fiona Apple's go-getting understudy, lifts her voice to operatic heights, and her piano fills every empty space. There are guitars, drums, and bass in the songs, but you wouldn't notice them unless you were listening for them. And chances are, with Salpeter's heavenly voice and keyboard runs commanding most of the attention, you didn't hear them.

"[Morris and I] both went into the studio with 10 or 20 songs," she says. "But the trouble with Bob's songs was that they were all different genres, and we couldn't make a very cohesive record with them. We wanted something that was natural from back to front."

Still, Salpeter insists that the Hush Sound remains very much a group. Remember — the four members almost called it quits before this. Goodbye Blues is their rebirth — their realization that they indeed want to continue as a band. That's the whole thinking here. Even the album's title kisses off bad times. But it's hard not to read something else into this role reversal. Especially when Salpeter brings up the S-word.

"Most of these songs were written for my solo project," she admits. "It didn't feel that cohesive at first, but once we got into the studio, everything came across as a Hush Sound record."

The Hush Sound's sound started back in 2005, when the classically trained Salpeter and rocker Morris started playing around with bassist Chris Faller and drummer Darren Wilson. They made nice, pretty, and occasionally acoustic music together. They recorded and released So Sudden without any outside help. Within a few months, Panic at the Disco's guitarist Ryan Ross heard the Hush Sound on PureVolume. Ross, whose band was discovered the exact same way by Fall Out Boy's Pete Wentz, passed the group's link to his boss.

Soon, the band signed with Wentz's Decaydance label, which re-released So Sudden. Within a few months, Salpeter, Morris, and their band were putting the finishing touches on Like Vines with co-producer and Fall Out Boy singer Patrick Stump.

Then the Hush Sound went on the road. And stayed on the road. It shared stages with Hawthorne Heights, Panic at the Disco, and, of course, Fall Out Boy. Then everyone got tired. "We thought, Why are we doing this, if no one cares about our band?" says Salpeter. "But then we started getting this overwhelmingly warm response at the shows. We figured then that we could work through all of the other stuff."

It's all good now, she says. The Hush Sound joined Panic's Honda Civic Tour in the spring. It's currently headlining the Dance Across the Country Tour — with Salpeter front and center. "To me, everyone's personalities are so evident in the playing," she says. "When I listen to the album, I hear all of us, not just me. I'm hoping the next record will be more of me and Bob singing together."