A UFC legend recalls his esteemed career in ass-kicking in a new tell-all book. 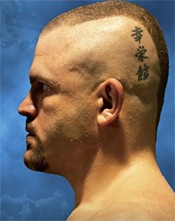 Chuck Liddell's trainer didn't take long to come up with a nickname for the Ultimate Fighting Championship vet. After watching the grappler in scores of kickboxing, martial-arts, and UFC bouts, it became apparent that Liddell was nothing less than a 6-foot-2, 205-pound "iceman," never rattled in the ring. "I think I got hurt more in college wrestling for five years than I have now. The training is hard on your body. But as an athlete, I know you're going to pay for it eventually," says Liddell, who's at Joseph-Beth tonight to promote his new book, Iceman: My Fighting Life. "My doctor told me my shoulders looked as if I was fighting myself constantly for the past 10 years. He said I'll need surgery before I'm 50."Until then, the muscular Liddell remains the face of a sport that has surpassed boxing in popularity. "I always thought the sport would get there someday. I'm just happy it got there when I was fighting, but it grew faster than I thought," says Liddell. "I don't think boxing will ever be as good as the UFC again."He says it's the sport's broadening fan base that's convinced him of its future. "Now, I walk through hotels, and there are 50-year-old ladies coming up to me to tell me I had a good fight. They look for the Mohawk and the tattoo on my head, and then they come over," says Liddell. "It's a whole different crowd of people following the sport now." Meet the Iceman at 7 tonight at Joseph-Beth Booksellers, 24519 Cedar Road in Legacy Village, in Lyndhurst. Admission is free. Call 216-691-7000 or visit www.josephbeth.com.
Thu., Feb. 7, 7 p.m., 2008