The Instagram Influencers Have Arrived on Cleveland's Food Scene 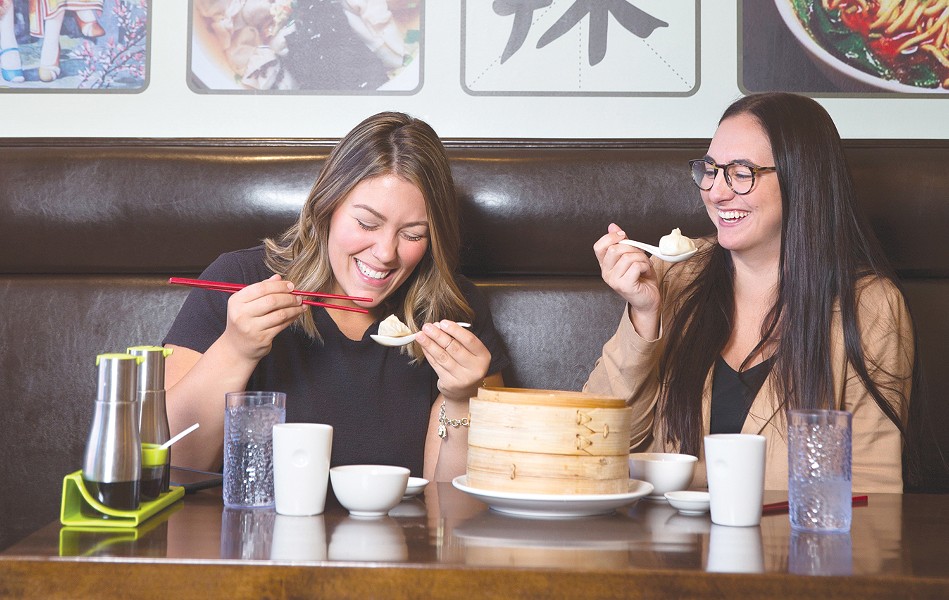 Janey Schafer and Aubrey Johansen are in the back of Asiatown's LJ Shanghai, hovering over baskets of wobbly soup dumplings fresh from the kitchen. But it isn't time for lunch quite yet.

Schafer, better known as @foodsofjane to the more than 58,000 people who follow her on Instagram, and Johansen, who 130,000 people may recognize as @thatswhatsheeats, have business to attend to. They're photographing the dumplings on their iPhones, positioning chopsticks atop the baskets ever so tastefully, shifting the baskets into sunlight streaming in from a nearby window. In the realm of social media and food, they're two of Cleveland's most prominent Instagram influencers.

"I never started the page with the intention of it growing to that size or for it to be my job today," says Johansen, who became a full-time influencer in 2017, after starting her healthy living-focused account in 2013 following gastric bypass surgery. "I thought life would be a lot different. You would wake up at 9 o'clock and have a matcha latte, take a spin class and then eat avocado toast on a patio. That's not at all what it is."

The quotidian glamor of the influencer lifestyle belies long days of production labor. "You're rushing around to the grocery store, and if you forget something, you have to race back and get it before the sun goes down," says Schafer, whose Instagram page showcases artfully composed plates of homemade pasta dishes and whose day gig is social media specialist for Destination Cleveland. "Especially with balancing it with a full-time job it has been super hard for me. When the sun is up, I'm always using my kitchen."

Johansen and Schafer have parleyed their followings into full-time and semi full-time careers, partnering with — the industry term for "getting free stuff from or paid by"— brands that think their partners' followers are in the market for their products.

But it is a long climb to the point where an influencer can make money.

"Most of my content is organic," says Claire Xu, a pre-med student at Case Western whose Instagram page @eatswithclaire has 6,500 followers. Claire began consistently posting her travels across Northeast Ohio's restaurant scene in 2016, and saw a 4,000-follower burst this summer. Xu has become part of a community of food bloggers who get invited to dine, on the house, at many of Cleveland's newest and sometimes finest restaurants.

"Sometimes it is planned ahead of time, and those are the restaurants I will post about multiple times over a couple of months," Xu says. "For me, my Instagram is more toward a hobby, but it is more than just that to me. It's slowly becoming more of a career."

In the restaurant world, savvy restaurateurs recognize influencers as a new means to market their businesses on a platform that saw 200 million new users from 2016 to 2017.

"When I started growing as an influencer I started reaching out to restaurants to see if they'd be interested in having me in," explains Xu. "Some view it solely as a marketing tactic and they will only talk to really big names. When I reach out to restaurants, I only expect half to respond."

Natasha Pogrebinsky, head chef at Tremont's Southside and Hi and Dry, knows the value in tapping into the influencer market. In September, she hosted about 30 people across the food, travel and art Instagram spheres for a preview dinner of her new fall menu. Thousands of people saw that meal crawl across their IG streams.

"If I have bloggers over, they're directly connecting with the mass population," says Pogrebinsky. Pogrebinsky began hosting blogger events in 2012 while she was co-owner of Long Island City's celebrated pan-Eastern European restaurant Bear. "It's almost like an instant connection to readers. With social media, it's a well-rounded representation of who we are: style, texture, vibe and food, all at once."

In the restaurant world, influencer marketing goes far beyond rudimentary meal-for-post exchanges. With 30,000 followers, Tricia McCune's @clefoodies is perhaps the most prominent restaurant-focused Instagram account in Cleveland. I accompanied McCune and her producer, who introduced himself as Stir Fry, to Hingetown's Saucy Brew Works for a product shoot, part of their year-long contract with McCune's media company, Mouthwater Media, that entails one post to @clefoodies per month.

"We keep these places top of mind," explains McCune. "Social media is the easiest way to do that. We're showcasing places like Saucy because what they're doing is amazing. But when the next place opens, people gravitate there, and they tend to forget."

"Partnering with the food bloggers in the area shows that we care about their opinion, we want to help them, we want to help their following grow and give them something to talk about," says Saucy Brew Works manager Tom Bogomolny. "We've had an uptick in traffic here since we started."

Not only are restaurants getting exposure for openings, new menus or just generally existing, working with influencers can nab them photos ranging from professional to well-done amateur shots that can be repurposed across all their platforms. Which makes sense for those going by the old chef adage that you eat with your eyes first.

"People are looking at Instagram all the time," says Pogrebinsky. "Now they're seeing 20 people taking professional photos and putting our food out there. It had a huge impact on our business."

How many or how few of those posts you see, of course, is entirely up to you and to how many of the ever-flowering number of accounts you follow. And it goes without saying that much of what you're seeing isn't organic praise — and, if the poster is going by the book, it will be transparently labeled as such. Which doesn't mean the dish or joint in focus isn't actually worthy of celebration. But if the blossoming symbiotic relationship gets the word out and puts butts in seats while padding the bellies and pocketbooks of some folks around town, it's hard to argue too vigorously against the trend.

"You have to have your social media on point," says Pogrebinsky. "It's extremely important now. When we did it for my restaurants in New York, we brought in customers from around the world. If you want to reach a wider audience, you need professionals."