Lay down a beating and look classy doing it. 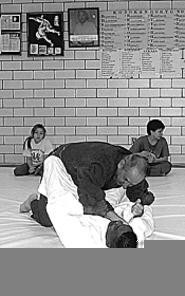 Barb Crompton likens the Mid East Judo Club to gym class -- one that teaches her son and daughter how to kick much ass. Twice a week, they bow before their opponents, then throw them to the mat and revel modestly in their victory. "It's taught them respect for other people," she says. "It's been very well-rounding for us."

Ken Lowery's happy to hear that. The club's president and a first-degree black belt, he joins two other instructors four nights a week (Mondays and Wednesdays are for kids 14 and under; Tuesdays and Thursdays for adults) for 90-minute lessons on judo etiquette and technique. "Kids learn how to play safe," says Lowery, "whether they're riding their bikes or playing at home or school."

Founded in 1978, the club offers one of two judo classes in the Cleveland Parks & Recreation system. In May, judo competitors from across the country compete in the annual Akiya Memorial Tournament. "Judo is an art that doesn't rely on physical strength," says Lowery. "It's about balance. The principle is, minimum effort and maximum efficiency." Mid East Judo Club meets from 6 to 7:30 p.m. Monday through Thursday at the Cudell Recreation Center, 1910 West Boulevard. Monthly fee is $10. Call 216-664-4137 for more information. -- Cris Glaser

Now a fortysomething Ford worker, Jeff Schmitkons hadn't bowled a single strike or spare since his school days at Lorain County Community College 25 years ago. But a couple months ago at Bowl Your Brains Out, he hooked up with three co-workers for a late-night session. To his amazement, Schmitkons racked up a respectable 165. "It's kinda like riding a bicycle," he says. "You just never seem to forget." In the past month, he's been inching closer to the 200 mark. "Give me a year," he laughs. "I'll be on the pro circuit, bowling perfect 300s before you know it." Late-night bowling happens from 9:30 p.m. to 12:30 a.m. Tuesday and Wednesday at Freeway Lanes of Parma, 12859 Brookpark Road. Fee is $5.95; call 216-267-2150. -- Cris Glaser