The Kids Are All Fight

The Signoffs build their reputation with hard-charging punk and a primal live show. 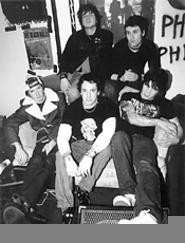 "There's nothing like going to a Pizza Hut in Goodland, Kansas, at one o'clock on a Sunday afternoon," smirks Signoffs drummer Chris Monroe. "Catching the after-church crowd, plugging in the jukebox, and playing 'Hell's Bells' by AC/DC. That's one of my favorite moments," he says, recounting a highlight from his band's first tour last year.

"We played the whole Back in Black album on the jukebox," adds guitarist Chris Churavy with a chuckle. "There were families and stuff there. We were just creating a ruckus."

Which seems to come naturally to the Signoffs. If antagonism paid the bills, this band would be cashing Jacuzzi-affording royalty checks right alongside Nickelback's Chad Kroeger. Instead, they can be found goofing on that Canuck's '80s burnout coif at Lakewood's Capsule on a recent Tuesday night. Amid the modular, fluorescent setting, which looks as if it were created by the set designer of A Clockwork Orange, even the Signoffs' very presence somehow seems contentious, as the black-clad rockers stand in marked contrast to their bleach-white surroundings. Onstage, they're even more inimical, taunting crowds with Iggy-esque abandon while emitting cool like a Frigidaire. Yeah, they got attitude, and isn't it about time for someone to reintroduce a little swagger into rock and roll's step?

"Have you seen the movie Singles?" bassist Sean Grady asks. "[Matt Dillon] has a quote in there, 'Where are the anthems of our youth? Where's the "Misty Mountain Hop?" Where's the "Iron Man" of today?'"

"I think, in music now, you see all these products of the industry," guitarist Tim Long says. "People are really starving for the predecessors [sic] to Led Zeppelin and Guns N' Roses and the debaucherous rock and roll bands of the '70s and '80s."

Well, truth be told, the last time Sixx made news was when he recently had a vasectomy. It's this very neutering of the randy rock gods of yesteryear that the Signoffs were born to counter. The dudes quote Dio, loudly bemoan the recent shelving of the Black Crowes, and pledge undying allegiance to the denim demons in Turbonegro. And just like those shitkicking Fins, the Signoffs back up their boozy bravado with a sound as ill-tempered as their dispositions. The spindly Cain oozes disaffection on the mic, howling and haranguing with an aplomb that belies his build. Long and Churavy duel like a punk rock Downing and Tipton -- sans the homoerotic leatherwear. Grady supplies bass lines of Lou Ferrigno girth, while Monroe -- one of the more accomplished drummers in the local punk ranks -- lends a steadying hand to the shimmying rhythms. It all takes on an added dimension when one considers their relative youth: Long and Churavy are 18; Grady is still in high school. And yet the Signoffs have managed to quickly develop into enough of a punk powerhouse to catch the ear of Cali skateboarding legend/crusty punk icon Duane Peters, who first saw the band after it opened for his group, the U.S. Bombs, just six months into the Signoffs' career in the spring of 2000. Peters was so impressed, he signed the band to his Disaster Records label, which is a subsidiary of punk prime mover Bomp Records.

"I think they're animals," Peters says. "I think they're probably the best brand of hardcore that there is. They're the future, and I love their new record. Everyone that asks me who they are, I tell them, 'Wait until you see them live; they're fucking animals. These kids are fucking young, and you'd never know it. They act like they've been playing since diapers.'"

"With this CD release and its subsequent touring, the band will grow into what I see each and every time they perform: a success story," says Mark O' Shea, head of Chicago-based 21st Century Management, who's helping guide the career of the Signoffs. "What made me want to work with them was part of the above, and then observing their work ethic, which is as hard-driving as the music. This is what will set the band apart in the future. The work ethic permeates all aspects of the band's existence. They have a vision, and if all the right moves are made, they will become successful."

For now, however, success is a relative term.

"I just want to get out of my parents' basement," Monroe laughs.

"We got no money at all," Cain adds. "You put so much into it to get nothing out of it."

"It's a long way to the top if you want to rock and roll," Long then deadpans with precision timing.

Indeed, the struggle is palpable on the Signoffs' snarling, self-titled debut, a restless, combative affair that's more about grinding teeth than hips.

"In recording this, we were broke, first of all; we were like 'We gotta get this done, get back to work, and start making money,'" Long says. "There was this built-up angst when we were in the studio, and the album ended up coming out a little bit faster than we had intended and a little bit more aggressive."

But if the Signoffs bare their molars a tad more than usual on their debut, it's all well and good in a defanged rock climate, where picking at one's scabs has replaced picking up chicks. Besides, sometimes you gotta fight for your right to party.

"We need less Mick Jaggers, more Ted Nugents," Monroe sums up matter-of-factly. "That's what it all comes down to."