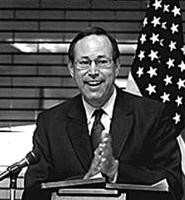 The world's gone crazy for uTube.com -- and the newfound fame is driving the company to ruin.

uTube is the name of the 10-year-old website for Universal Tube & Rollform, a Toledo distributor of pipemaking supplies. But it seems another, somewhat more popular site called YouTube.com is sending undue attention Universal's way.

When websurfers across the globe want to find movie and video clips, they're mistakenly going to Universal's site -- to the tune of 70,000 inadvertent hits a day. Universal, which numbers just 17 employees, has found its unfortunate fame rather pricey, since all the traffic is jacking up its web costs.

So the company responded in a most patriotic way: It filed suit last week in U.S. District Court, demanding that YouTube surrender its web address -- or pay for Universal to switch domains, at an alleged cost of seven figures. (Universal boss Ralph Girkins did not return Punch's calls; YouTube executives were busy rolling on the floor laughing, and could not be reached for comment.)

The flap has led Universal to pull the plug on its own website. Meanwhile, mild-mannered Carrie at the front desk of Universal HQ has graciously accepted death threats in multiple languages from irate callers.

"People think we're stupid for suing YouTube," she says cheerfully. "They say, 'Why don't you just die.' But our catalog is basically our web page. If we don't have a web page, we don't have a business. And I need a job."

Ever heard of being a team player, Carrie?

Stupid Crooks, Act 321,975
Last week, a man in a gold Mercury Cougar decided to steal $27.25 of gas from a Citgo in Wadsworth. The cashier called police. Since the guy was driving a gold Cougar, for chrissakes, it wasn't long before police caught up with 39-year-old Scot Moore.

Officer Michael Ballway soon learned that Moore's mom probably doesn't have a bumper sticker that reads "My Child is an Honor Student at the School of Master Criminals." Moore quickly admitted that he's something of a regular on the pump-and-run scene, and went on to brag that he did 90 days in Akron jail for stealing gas.

Ballway, whose police training did not prepare him for dealing with suspects whose IQs are 50 points below room temperature, continued his interrogation in disbelief. "So you drove all the way to Wadsworth to steal gas?" he asked.

Moore responded that he "thought it would be easier to steal gas in Wadsworth," then admitted to removing his license plate so he wouldn't be caught.

But after the questioning was finished, Moore told the police that he "preferred to speak with his lawyer prior to giving any written statements." Good call, pal.

Welcome to Cleveland
Cleveland is desperately trying to lure young professionals to our fair city. Fortunately, when a San Francisco couple recently relocated to Ohio City, the Illuminating Company was there to help.

After finding an apartment in mid-October, the couple called the power company to begin service. But when they moved in two weeks later, there was still no electricity. A friendly operator named Kim not-so-politely informed them that it might take another week. After all, she noted, the Illuminating Company doesn't "guarantee our service." (Considering the company's parent, FirstEnergy, once blacked out the entire eastern seaboard, this is what's known as "understatement," boys and girls.)

When the couple asked Kim if she could be a bit more specific, she gruffly responded that the "power will come on when it comes on." Wharton business school faculty rushed to the scene to study this bold new frontier in customer service.

The couple ended up spending four nights in a hotel, which apparently had enough pull to get electricity.

Welcome to Cleveland, young couple. Tell all your friends.

Everybody loves Mike
A day before the election, U.S. Senator Mike DeWine and a batch of yes-men were hustling votes at the Tower City Rapid station. But senators aren't known to be on a first-name basis with a concept called work. As commuters hustled to their jobs, DeWine and his entourage blocked the escalators as they handed out literature, forcing decent Americans to take the stairs.

This, it seems, didn't sit well with those whom Senator Mikey hoped to sweet talk. When DeWine stepped in front of one woman to shake her hand, she yelled, "Get out of my way, you douche! You're gonna make me miss my train!"

Apparently being a U.S. senator doesn't have the gravitas it once did.

Taft leaves a parting gift
In the waning days of The Worst Administration Ever™, Governor Bob Taft is ensuring that his patronage system will live on.

Enter Jacqui Romer-Sensky, Republican gal pal and former director of the state's Department of Job and Family Services. She resigned about five years ago after Taft threw her under the bus during an early round of scandals, which will soon be chronicled in a double-live CD, Essential Taft: The Forgotten Hits.

At the time, the state had given Andersen Consulting $60 million to develop a job-matching system that never . . . actually . . . worked.

But what's another blown $60 mil among friends, eh? That seemed to be Romer-Sensky's feeling. She kept steering multimillion-dollar no-bid contracts to Andersen -- a company, coincidentally, for whom she once did consulting.

While her predecessor later pleaded guilty to ethics charges, Romer-Sensky escaped with only a soiled reputation and a badly worn pair of fishnet stockings. Until recently, that is, when a lawsuit filed in Dayton called her role into question.

But with Taft nearing the end of his reign, there's not much time to kick around Bob anymore. So he appointed Romer-Sensky to the Ohio Rehabilitation Services Commission, an agency that's supposed to help disabled people get rehab and work. Rest assured that she'll be serving the state's most vulnerable citizens well -- or at least taking their money.