An Akron sportswriter compiles the definitive tale of a teen phenom. 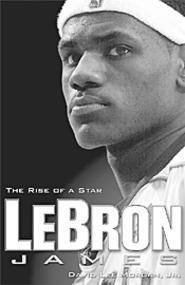 LeBron James plays in his first pro basketball game this week, but already there are multiple books about him. The latest, LeBron James: The Rise of a Star, purports to be the most comprehensive and accurate of them -- mainly because its author, David Lee Morgan Jr., has had access to the roundballer, his family, and friends since before the hype began.

"No one in the world was there when I was," Morgan says. "I saw LeBron as a scrawny freshman, when he had a little nappy afro."

The Akron Beacon Journal sportswriter knows the former coaches, the teammates, the inner circle -- and the mom. "I told Gloria I wanted to write a book about that crazy year, and she said, 'You go ahead and write that book,'" Morgan says. "She gave me a list of friends, family, teachers, and everybody she could think of who she thought would make the book better. I was lucky enough to be at the right place at the right time."

The Rise of a Star covers James's poverty-stricken childhood, the unstable early years, the Sports Illustrated cover, the $100 million promotional contracts, and the NBA draft. But it also digs deeper, tracing James's court prowess over the past few seasons and the controversies (the throwback jerseys, the Hummer) that marred the end of his high school career. "I wanted to tell a true story about who he is and where he came from," Morgan explains. "I didn't leave out anything that made him look bad."

If James has appeared slow to adjust in his first days on an NBA court, Morgan is unconcerned. "He's the real deal," he says. "He won't bust. This is something he was meant to do."