His name muddied by scandal, Benny Bonanno tries to scrub himself clean. 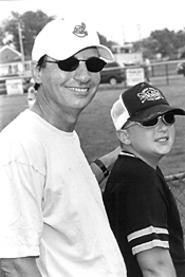 The last time the public eye fixed on Benny Bonanno, he wore an orange jail jumpsuit, handcuffs, and leg shackles. The date was February 2, 1996, the scene a Common Pleas courtroom. Bonanno had resigned his post as municipal court clerk two months earlier, after admitting he used his office and staff to aid the campaigns of fellow Democrats. He pleaded guilty to a felony charge of theft in office and three misdemeanors, and now stood before Judge Michael Corrigan to hear his fate.

Given the relative tameness of his crime and his willingness to pay restitution, he figured he would avoid prison. Corrigan had other ideas.

"Kiss your wife goodbye," the judge told Bonanno moments after jolting him with a one-year sentence.

Though he would be released on probation less than two months later, his political ambitions had been dealt a life sentence -- convicted felons cannot hold public office. Once a boy wonder who seemed destined for the mayor's office, county commission, or even, some said, the governor's mansion, Benny Bonanno would never stump in this town again.

Fast forward to June 2002. On a sun-kissed evening in Rocky River, Bonanno sports an Indians cap and a beige windbreaker. He's coaching his 11-year-old son's baseball team and appears every bit the sated suburbanite -- tan, fit, relaxed. In between shouting support to Max Bonanno and his teammates, the former councilman, school board member, county recorder, and state representative offers reflections on a career that, if it fell shy of expectations, never lacked for buzz.

"I had a great run in politics," Bonanno says, his quick-draw smile as toothy as ever. "I feel like I did some good things. But I've gone on with my life."

Gone on and done quite well, thank you. The kid from Murray Hill, who used to wear out several pairs of shoes every election from tireless door-to-door kibitzing, now strolls the halls of Pubco Corporation, a manufacturing firm where, as senior vice president, he pulls down a six-figure salary. He and his wife share their $215,000 home with Max and his 13-year-old sister, Calla. At 51, Bonanno looks a decade younger, while his hair-on-fire patter remains as rapid as when he won election to Cleveland City Council in 1975, at the tender age of 25.

"There's no bitterness," says Bonanno, the erstwhile Dennis Kucinich acolyte who narrowly lost bids for mayor and county commissioner in the late '80s. "I have a lot to be grateful for."

One memory, however, fails to stoke warm feelings: his criminal conviction. So last month, Bonanno filed a request with the county prosecutor's office to have his record expunged. A special prosecutor will review the case in coming weeks before making a recommendation. Prosecutor William Mason requested appointment of a special prosecutor because he and Bonanno are friends.

If he gets his wish, Bonanno would still be barred from seeking office; only a pardon from the governor could make him eligible. Yet a freshly swabbed record would clean the mud from his name and perhaps allow for a return to politics in the role of, say, campaign adviser. State Representative Dale Miller (D-Cleveland), who sometimes turns to Bonanno for informal counsel, says he would consider hiring his longtime friend if his record were cleared. "It's possible, he says. "There's only a handful of people in Ohio who understand grassroots politics better than Benny."

On his lawyer's advice, Bonanno declines to reveal the motives behind his request. But he tries to stamp out any speculation of a comeback, insisting his intentions relate to work and family.

Those closest to Bonanno both confirm and contradict his rationale. "His reasons are far more personal than political," says Councilman Jay Westbrook, a Bonanno ally who, like Miller, still consults his old pal. "He neither needs to nor longs to return to politics."

Former state Representative Frank Mahnic says just the opposite: "To this day, he misses politics. No one liked it more." He adds that if Bonanno ever did find his way back to the campaign trail, "I'd support him in a heartbeat. And I strongly believe the public would as well."

Regardless of who's right, it's evident that a good many past and present public servants believe Bonanno "got screwed," to borrow Mahnic's phrase. In an era when political friends become enemies faster than you can say Jim Jeffords, Bonanno inspires an almost quaint kind of loyalty. Even former Mayor Mike White, who left office in January to embark on his new career as a recluse, breaks his media boycott to give it up for Bonanno.

"I absolutely support Benny's request," he says via fax. "It was a very unfortunate confluence of events that led to his conviction. If there is any fairness in this world, his record will be expunged."

In an indirect way, White's ascension in Cleveland politics contributed to Bonanno's demise. In 1989, White blasted out of obscurity in the mayoral primary to finish second behind George Forbes, nosing out third-place finisher Bonanno to advance to the runoff election. White went on to trounce Forbes and become a three-term mayor. Bonanno, at one time viewed as the man to beat, returned to the netherworld of the court clerk's office, his post since 1987. He won reelection in 1993; two years later, he would resign in shame.

His hard, fast fall occurred in a scandal that, up until the mid-'90s, would have ranked as business as usual. It was common, if not strictly legal, for elected officials to exploit public resources to prop up their own campaigns and those of other politicians. But when investigators stopped looking the other way, there's no doubt Bonanno had it coming.

He ran an old-fashioned campaign mill in the clerk's office. He used his employees and office equipment to churn out mailers, voter lists, and other materials for himself and a who's who of area Democrats. Among the beneficiaries were then-Prosecutor Stephanie Tubbs Jones, Mason, and Common Pleas Judge Timothy McGinty -- who employs Bonanno's wife as his bailiff -- as well as Westbrook, former Councilman Miller, and Patrick O'Malley, now the county recorder.

Bonanno also coerced workers to contribute thousands of dollars to his campaign fund in exchange for job security and business favors. To skirt limits on individual donations, employees used the names of unwitting friends and relatives, sometimes to comical effect. One worker gave $4,000 in the name of his 14-year-old son; another borrowed the name of an old college roommate to kick in $2,000.

The prosecutor's office launched a probe of Bonanno's office following Plain Dealer reports of potential election law violations. Thirteen of his employees and another associate eventually pleaded guilty to misdemeanors.

The case teemed with irony because of Tubbs Jones's standing as prosecutor. In 1991, Bonanno played a crucial behind-the-scenes role in helping her capture the office after longtime prosecutor John Corrigan retired. Tubbs Jones's victory came in a bitter clash against none other than Michael Corrigan -- John's son and the man Bonanno would face in court on February 2, 1996.

Tubbs Jones, under fire for going easy on White, former Congressman Louis Stokes, and other public officials in prior investigations, made an example of Bonanno. So did Corrigan. The one-year term he imposed was widely seen as revenge for Bonanno's backing of Tubbs Jones five years earlier. Between prosecutor and judge, Bonanno found himself in the proverbial shit sandwich. Or, as McGinty puts it, "In Cleveland, politics is a contact sport. Players get carried off the field, and Benny was one of them."

Tubbs Jones, elected to Congress in 1998 to fill the seat vacated by Stokes, did not respond to interview requests. Now an appellate judge, Corrigan denies that he felt the urge to retaliate. "I have no animosity toward Benny Bonanno," he says, noting that the two chatted briefly at a recent public event. "People make mistakes."

Bonanno voices similarly mellow sentiment about Corrigan. He also admits with a smile that he continues to read The Plain Dealer, which milked his downfall for dozens of stories. It's the same let-live attitude that carried him through controversy and won him the allegiance of party faithful -- and made him a larger figure in political death than during his career.

Rather than go to trial and risk further damage to the Democratic Party, he ate a bullet by pleading guilty. Instead of trying to defray blame, he maintained that none of the politicians he helped was aware of the work going on in the clerk's office. Beyond that, he served 55 days in prison and a year of probation, did 200 hours of community service, and forked over a $5,000 fine and $35,000 in restitution.

By the decidedly lower standard of political sacrifice, Bonanno's penance made him a living martyr. Insiders like to compare his case to that of former county Recorder Frank Russo. In the mid-'90s, Russo misspent $26,000 in public funds. By the time he pleaded guilty to a misdemeanor count of dereliction of duty in 1998, he had been appointed county auditor. He repaid the $26,000 but received only a $750 fine and was not forced to resign.

"[Bonanno] lost his career, then he did what he was told," says Westbrook, whom Bonanno appointed as his successor when he left council in 1979 to join the statehouse. "He deserves a clean record."

Mahnic agrees. A senior court clerk deputy under Bonanno, he was convicted of a misdemeanor for his role in the scandal and later had his record expunged. "If anyone has done what it takes to get a second chance, it's Benny."

Under state law, requests to clear a criminal record are handled by the judge who meted out the original sentence, unless the judge is no longer with the court. Few believe that Bonanno would have made his request if Corrigan still sat on the Common Pleas bench, despite the two men's claims that no hard feelings linger. (Corrigan declined to speculate on the merits of Bonanno's filing.)

Yet even without a clean record, there would seem to be a place for Bonanno in Cleveland politics. Jeff Johnson, a former state senator, recently served a 15-month sentence for extortion. When he joined the staff of Mayor Jane Campbell in January, nobody blinked.

"Considering what some people have done in political life, [prosecutors] got Benny for a traffic ticket," says former county Commissioner Tim Hagan, a Democratic candidate for governor who's known Bonanno for 25 years. "I don't think any candidate would be hurt by having Benny work for him even now."

Still, at least publicly, Bonanno says politics has faded into his rearview mirror. He keeps an eye on the game and talks with old friends. He enjoys handicapping races, predicting that Mary Boyle will win her bid for U.S. Senate by five points. But, he insists, that's as far as he wants to take it.

"You've got to know what it's like to lose if you're going to know how to win. I've experienced both, and I'm happy where I'm at."