Collinwood earns its job center after 20 years of trying. 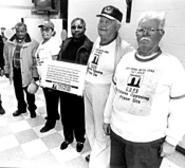 In a machine shop, the tool and die maker has traditionally been the creator, the one who fashions a three-dimensional world out of nothing but a rough blueprint.

Jack Petrusiak was a tool and die maker for 40 years, and his thinking, like his handiwork, is his own. In the 1960s, he saw his entire street go from lily-white to all-black-plus-one-white-guy: him. He wasn't alarmed, because he had a nice house and decent new neighbors, who eventually would become like family.

So when George Forbes and Mike White proposed building a prison in his 'hood, touting it as manna for starving people, he didn't buy it. After a little searching, he found that White was an officer in the construction company that would have built the prison.

He and his neighbors got together, loudly protesting. A prison might bring a few jobs to people hit hard by a plant closing, they said, but it certainly wouldn't turn an urban wasteland into the land of milk and honey.

Petrusiak and his neighbors spent years fighting the prison, a 70-acre design that would have been squeezed onto the 55 acres on Coit Road in Collinwood where the Fisher Body Plant once stood. They wanted hope, just like people in the suburbs. Instead of a prison, put a job-training center there, they suggested -- something that would give the kids more career options than dealing drugs.

Forbes and White "thought they could come in and just snowball the thing," Petrusiak recalls. "Tell 'em, 'This is good for you, and this is what we're gonna do,' and people would just say, 'Ooh!' It didn't turn out that way. Because people were thinking in terms of their children, of prisoners escaping, of people trying to sell dope and smuggle it in. It was demeaning to us to think that we would put up with that."

Eventually, the homeowners won out against the big boys, but there was a price to pay. The land, contaminated by the 60 years of industrial waste that General Motors left behind, sat idle for two decades, including the 12 years White spent as mayor.

During that time, the residents didn't get so much as an outhouse built on the site, let alone the job-training center they dreamed about. "It's not been a matter of one or two years," says Petrusiak. "It's been a matter of 14 or 15 years." His hair has gone white waiting, and some of his neighbors' kids have grown up to go to prison themselves.

A few months ago, however, Petrusiak and his neighbors found out that they might get their job-training center after all. The federal government wants to put a Job Corps Center there, transforming it into a campus where some 500 students from the area could live, work, and study.

Petrusiak, 85, who moved from East 143rd Street to an apartment after his wife died in 1995, joined his former neighbors last week at a meeting to officially hear the good news from Job Corps officials. The mood was celebratory, and the gym at St. Joe's Elementary School full.

"It's a sorely needed thing here," Petrusiak commented, in between hugging his old friends. "Not a prison, but a means of getting people into the life stream in a respectable manner, marrying, having a life that's compatible to a [healthy] society."

Petrusiak's neighbor, the Reverend Annie Curry, lives right across the street from the old Fisher Body site. Her children are grown now, but she still remembers the day she first heard the news about the prison. "I had curlers in my hair, and a TV newscaster comes to my door and asks me what do I think about the prison. 'What prison?'" She called the councilman at the time, Larry Jones, to get the skinny. Word spread, and the angry neighbors rallied at backyard barbecues and front-porch gatherings.

Curry says she's thrilled with the thought of a Job Corps, the only surviving program from Lyndon B. Johnson's War on Poverty, coming to her street. She only wished it had come sooner. "It coulda helped a lot of kids," she says. "Some alive and some dead."

Eugene Fearing's children are grown now, and he's gone from a young father to a frail middle-aged man with colon cancer. "When we started fighting the prison, we said, 'Wow, am I gonna live to see [a job-training center]?' Twenty years later, maybe half of us are here to see it. I'm the youngest of the bunch. I'm 50."

Petrusiak says his former next-door neighbors on East 143rd could have really used a Job Corps when their kids were growing up. He remembers the son as a toddler, playing catch with his parents on their bright green lawn. He still keeps their framed picture, taken in happier times, on his mantel.

"I watched him grow," he says of the son, "and he wound up being a drug addict and a drug peddler, in and out of jail. His two sisters were destroyed, devastated by drugs.

"These families moved in -- good families! -- and their children were subject to so many bad things. Now, had they been able to get theirselves educated, they would have gotten jobs, they wouldn't be hanging around the corners, afraid of the dealers who'd got them addicted."

Job Corps spokesman Mike O'Malley, who's based in Washington, says that plans for the Coit Road center should be solidified in the next few months. Although Ohio taxpayers have already spent $30 million to clean up GM's mess, the groundwater is still contaminated, and no one's sure yet how much more cleanup will be involved.

Fearing, who lives across the street from the site and knows its contamination all too well, is trying to focus on the good news.

"I'm predicting that in winter 2004, we should have an opening of that new center," he tells the Job Corps people from his seat in the sea of friends and neighbors. "I don't know how long you guys plan on staying. I hope forever."