The bird's the word at footrace.

by Lucy McKernan and Cris Glaser 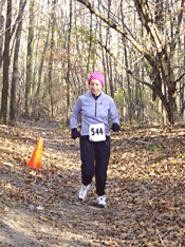 Cycle Psychos
Stationary bike riders act like they're on the real thing.

Before Tara Taylor starts her Power Cycle class, she tells her students to close their eyes on their stationary bikes and imagine they're pedaling up a steep hill. As she describes the imaginary trail to the class, her students shift gears -- literally. "As you go up, you add a little more resistance," says Taylor, fitness director at the Euclid YMCA. "At the top, you take all the resistance off, so you can slide downhill."

On October 31, the YMCA of Greater Cleveland launched the program by installing up to 25 six-geared bikes in each of its 10 branches. Four days a week, fitness buffs work out in half-hour sessions. "People ask, 'Why are the classes so short?'" says Taylor. "Let me say, you can get an awesome workout in 30 minutes." Get cyclin' at noon and 7:45 Thursday, 11 a.m. Saturday, and 6 a.m. and 6:30 p.m. Monday and Wednesday at all YMCA of Greater Cleveland branches. Monthly membership fee is $34; one-time nonmember fee is $7. Call 216-566-9622 for more information. -- Cris Glaser

At Sunday's third-annual Save the Woods Benefit Trail Run in Avon Lake, tree-hugging runners stay on familiar ground. It's a muddy course, so race director Rick Cadwell advises participants to wear old shoes. "They'll jump over logs and cross streams," he says. In addition to a five-mile run, a 5K walk and run have been added to the mix this year. But the heart of the event remains the five-miler, which loops through a course made up of various dirt trails. It amounts to approximately 180 acres, right in the middle of town. Says Cadwell: "Think of it as a miniature Central Park." The race starts at 9 a.m. at NCN Fitness, 445 Avon Belden Road in Avon Lake. Registration is $20; call 877-722-3728. -- Lucy McKernan