The Many Faces of Matthew Dear

Techno prince and new-wave raconteur is anything but minimal. 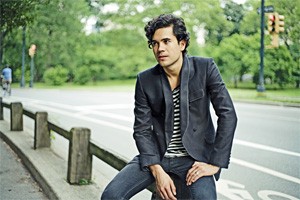 Matthew Dear cruises the highway in a rental van, somewhere on the I-10 in Louisiana. He's headed to a gig in Austin. It's a homecoming of sorts for a newbie Brooklynite.

Dear is the producer and DJ who set the dance-music world on fire with his 2003 release Leave Luck to Heaven, an eloquent expression of minimal techno and the top seller for the relentlessly hip Ghostly International.

Dear is currently touring behind the brand-new and far superior Asa Breed, a sensuous creamsicle of an album anchored by 4/4 beats, with hints of krautrock's motorik throb, robotic funk, '80s new romanticism, and a dash of classical minimalism. Dear fleshes out the disc's taut beats with a brooding baritone while coloring between the lines with effects that recall insect chatter. It's what he calls "my attempt at Brian Eno-style electronic pop."

If that's not enough, touring behind Asa Breed allows Dear to do something most Big Apple transplants can't or simply won't — drive. "It feels good to get behind the wheel again," he says with a chuckle. "Must be a control issue."

It's no secret that being a DJ, where you have godlike mastery over every part of the performance and composition, appeals to those who need control — or at least those who obsessively compartmentalize everything, like Dear does. Instead of recording under a single moniker, he uses a different alias for every stylistic shift.

"In my mind there's a clear distinction between everything," he says of his various personae. "Audion is your dark and twisted dirty drug music. The stuff I'm making under my own name is listening music — it's not what you hear at some underground club in Berlin at four in the morning."

As for Jabberjaw, Dear likens it to a sunnier version of Audion. But it's clear that False — released only on the M_nus imprint — is his most delicate proposition. "It's still for the dance floor, but even later in the night."

All the splinter groups and side projects can be annoying, but it makes perfect sense: Dear's various aliases are a nifty way to manage his creative OCD. Except the theory falls apart with Big Hands, his touring band. Extra personnel means mistakes and artistic differences — all those messy things that come with surrendering control to other musicians, doesn't it?

"Not really; it's still a very tight set, very locked into the computer," answers Dear. But he does own up to the logistical hassles of traveling with a band. "We drove 14 hours overnight. In the techno world, we'd all be on flights."

But don't accuse Dear of crass commercialism, because the "different markets" he speaks of are primarily for his own performance pleasure. Once a beat purist who only needed drum loops to speak his mind, the young jock has now found plenty more to say with words. Judging by his quantum leap in narrative sophistication, indie rockers, the emo nation, and perhaps even the freak-folk set are ready to listen.

While penning the lyrics for Asa Breed, Dear learned about a tragic event in his family's history. It inspired the album's unlisted bonus track, "Vine to Vine," which he says poured out of him. In it, Dear makes his most overt sociopolitical statement to date and, in the process, connects with his Mexican American ancestry.

"It's about these Texas Rangers who murdered some ancestors of mine for their land," he explains. "I think it was more of a race issue back then or maybe a class issue. [Texas Rangers] were stealing from the poor."

Dear doesn't ordinarily use music as a soapbox. Like many songwriters, romance gone awry provides plenty of lyrical fodder. Dear, however, has a tendency to swap first-person self-indulgence for narratives peopled by characters realistic in their nuances.

"['Death to Feelers'] is about a long-distance relationship between two people who know it probably isn't going to work," he says of the best tune New Order never wrote. "One of the characters is pissed off the relationship isn't working. It's like they're saying, 'Death to anyone with emotions.'"

Quirky titles aside, the songs on Asa Breed don't elicit a lot of laughs. In fact, the booty-shaking second single, "Don and Sherri," is a cautionary tale about a middle-class American couple who have settled for the mortgage and white picket fence, with no clue as to how miserable they are.

He and his many faces, that is.