The Many Flavors of Cleveland's Asiatown, One of the City's Most Delicious and Diverse Dining Neighborhoods

"When my father opened Superior Pho, we totally expected to serve only the Asian community," Chris Nguyen recalls. "At the time, he couldn't get a good, authentic bowl of pho around here so he decided to do it himself. I don't think he expected the community at large to embrace it as much as they did. He was pleasantly surprised."

The year was 2002, and already Cleveland's "new Chinatown" was picking up considerable steam. Our city's original Chinatown thrived in the '30s, '40s and '50s in an area largely confined to Rockwell Avenue between East 21st and East 24th St, where restaurants like Golden Gate, Shanghai and Chin's Red Dragon stayed open until 4 a.m. on weekends.

In the early 1990s, the epicenter of Cleveland's Chinatown moved east, along with the housing opportunities. In place of a flashy neon-illumined strip, this new community was less defined, but largely confined to the area between St. Clair and Payne avenues, and East 30th and East 40th streets. In the heart of it all was the brand new Asia Plaza, home to a number of Asian-owned shops and restaurants. Most notable among them was the 200-seat Li Wah, the third of a trilogy of Wah-named eateries that already included shops in Rocky River and Beachwood. 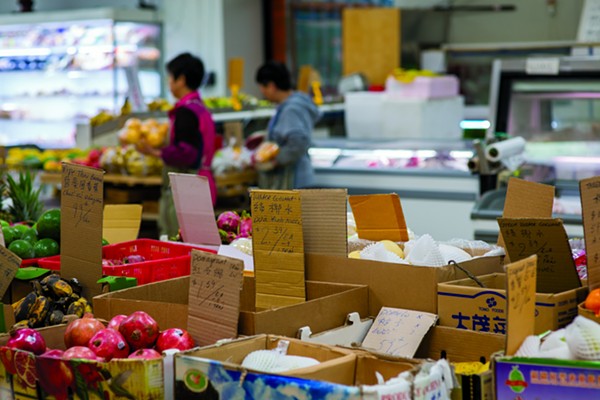 The most notable difference between Cleveland's new and old Chinatowns, apart from geography, was their customer bases. Whereas Rockwell was littered with chop suey and chow mein shops geared to American palates, newer restaurants like Li Wah and Bo Loong, which opened five years before Asia Plaza, catered to Asian immigrants. Asian grocery stores like Global Approach in Asia Plaza, later replaced by Tink Holl, catered almost exclusively to home cooks from Taiwan and mainland China, but also increasingly from the Philippines, Vietnam, Thailand and Korea.

That diverse assemblage of residents is why, in 2006, the neighborhood began going by the more inclusive moniker of Asiatown, which the local CDC said better reflected the community.

Following years of steady growth, which has seen the proliferation of Asian-owned restaurants, markets and service-based businesses geared to immigrants, Cleveland's Asiatown has never been richer. Located within a few short blocks are restaurants that serve Cantonese dim sum, Vietnamese pho, Korean bulgogi and Thai noodles. New malls have been built, anchored by grocery stores that look as though they were airlifted from the Far East.

"If you build it, they will come." As the old saying goes, the neighborhood that was built to service and satisfy its own residents and those who look and sound like them has evolved into one that attracts diners and shoppers of all stripes.

"We are definitely seeing an influx of non-Asian Americans coming into the neighborhood that we weren't seeing before, in volumes that we didn't see before, to eat and shop," says Nguyen. "I think the Asian community is very happy about that."

Events like the Cleveland Asian Festival and Night Market have attracted tens of thousands of people to the neighborhood over the past six, and two, years respectively, exposing many of them to the food, people, culture and neighborhood for the very first time. That support does not go unnoticed by those who live and/or work in the area, many of whom have grown up on the sidelines of mainstream American culture.

"With the community at large being as supportive of the Asian community as they have been, embracing our food and our culture and our presence, I think it's great," says Nguyen. "For people who are immigrants, especially refugees from the Vietnam War, we really value those American traits, where everyone can come to this sort of salad bowl of a community and live the American dream — or at least have their shot at it."

Tucked into the rear of Asia Foods Market, which itself is tucked into the Asian Town Center mall, is this makeshift restaurant, more accurately described as a few tables and a counter. Noodle soup lovers come here for bun bo hue, the spicy Vietnamese beef noodle soup, and shrimp wonton noodle soup, broth loaded with shrimp and pork dumplings, egg noodles, greens and scallions. But there also is a bakery stocked with grab-and-go buns, both sweet and savory.

From dim sum dishes and Hong Kong-style noodle soups to golden roast duck and beef chow fun, this Asiatown staple can please a crowd. For those who tend to get lost within lengthy menus, Wonton has full-color photos of nearly every dish covering three of its four walls. You can't go wrong with the chive pot stickers, shrimp dumpling noodle soup, salt-baked shrimp or soy sauce chicken.

Along with Bo Loong, Li Wah is the place to go for dim sum. Weekends here bustle with activity, with adventurous diners jostling for seats in the massive 200-seat dining room. They all are there for the bewildering spread of dim sum items, which are wheeled around the room in stainless carts. Do not miss the siu mai, har gow, sticky rice in lotus leaves, golden roast duck, chicken feet and egg custard tarts.

This 22-year-old restaurant began life dispensing mainly Vietnamese and Thai food but has long since expanded into dishes originating from all over the region. While everything on the sprawling menu is good, Siam excels at seafood. Live lobster is plucked from the tank and stir-fried in black bean sauce; salt-baked squid or shrimp is crispy, salty and delicious; glossy shrimp and scallops are laid atop a bed of pan fried noodles.

A lot has changed in the local pho scene in the 14 years since Manh Nguyen opened his noodle shop in the small Golden Plaza. But we challenge you to find a better bowl of the Vietnamese beef noodle soup. But don't stop there; Superior's bahn mi sandwiches are, well, superior, as is the chicken cabbage salad and all the vermicelli noodle and broken rice dishes.

Some like it hot, and those who do go to this authentic Szechuan restaurant at Tink Holl Market. Numbingly spicy dishes like ma po tofu, three-pepper chicken, and fish in hot pot attract heat-seeking diners to this out-of-the-way dining room. Supplement those meals with classic dishes like cold cucumbers with chile and vinegar, garlicky sauteed greens, beefy noodle soups, and twice-cooked pork. If karaoke sounds fun, call and reserve a room.

Koko is a full-service Asian bakery, where the glass display coolers are brimming with colorful fruit-topped cakes, tarts and pies. But what brings people in on their way to work are the doughnut-style cases filled with grab-and-go buns. Soft, savory buns are filled with barbecued pork, curried beef, even hotdogs. Sweet buns are filled with taro, red bean paste and coconut. A small lunch menu brings folks in throughout the day, as do sweet beverages like smoothies, bubble tea and Taiwanese shaved ice.

A decade back, this popular Asian grocery moved from its original home in Asia Plaza to this brick complex, which also houses Szechuan Gourmet. The expansive grocery is one of the best resources in town for home cooks, thanks to an unbeatable selection of fresh and dried noodles, frozen dim sum items, and staples like soy, Sriracha and coconut milk. Tink also has fresh seafood, golden roast ducks and chickens, which are hacked to order, and a wonderful produce section brimming with bright Asian greens.

Located inside the Asian Town Center, the modern Asia Food Company looks like a typical American grocery store that has had its regular contents swapped out for Asian ones. In place of cucumbers and celery, there's Chinese eggplant and bitter melon. In place of chicken eggs, there are duck and quail eggs. Instead of spaghetti, there's lo mein. Hoisin sauce replaces ketchup. The potato chips have been swapped out for shrimp chips and the Hershey's with Pocky. You get the idea.

Part of a small regional chain of Asian markets, Park to Shop is one of Asiatown's newer grocery stores. And yes, there is plenty of parking. Like Asia Food Co., this market is bright, modern and stocked with ingredients a shopper is not likely to find at their friendly neighborhood Dave's. There's a produce section, meat and fish department, and even some delicious prepared foods. All that is in addition to aisle upon aisle of canned, bottled and packaged items.

Small, cramped, chaotic and exotic as heck, this market features narrow aisles between tall shelves overflowing with strange and fascinating ingredients. This place happens to be a great source for live lobster and in-season crab, but also for cooking utensils like woks, cleavers, bulk chopsticks and strainers.