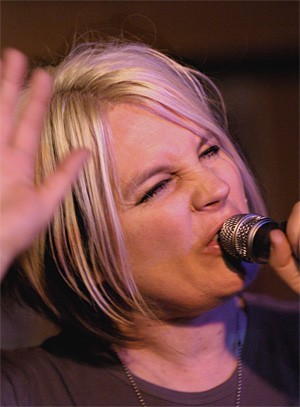 Uncle Scratch, a roots-based act that pens songs like "Kickin' the Devil in the Balls," was attacked in the very last scene of the first Horror Convention Massacre flick.

"This film picks up immediately where part one ended, so they are dying in this film and encounter a certain higher being," says Old School Sinema director and producer Joe Ostrica. "It's bound to be the audience's favorite scene, [in addition to] their special closing-credits sequence."

The soundtrack features local roots, rock, punk, and retro bands, including Uncle Scratch, the Alligators, Cult of the Psychic Fetus, Horror of 59, Lords of the Highway, the Slack-Jawed Yokels, and the Whiskey Daredevils. The producers have no plans for an actual album, but Cult of the Psychic Fetus, Lords of the Highway, and Horror of 59 will play following the movie's premiere.

Ostrica says Massacre 2 is "a throwback to exploitation slasher films of the '70s and '80s, with plenty of blood, inventive killings, T&A, and outrageous humor."

The movie will be available on DVD in late November or early December. Visit www.myspace.com/thcm2 to see a trailer.

• Metal-industrial machine Keratoma has completed its long-anticipated second album, Anathema. The band will debut it at a listening party at Rockstar Cleveland (2083½ East 21st Street, upstairs) on Tuesday, October 30. A CD-release party will follow at Peabody's (2083 East 21st Street) on Friday, November 9. The Cleveland band recorded at Mars Studios with Bill Korecky (Mushroomhead, Integrity). The band is rotating new tracks at www.myspace.com/keratomaband.

• Sensual rawk duo Mr. Gnome is on tour, but making pit stops to record its first full-length release. The band tracked songs at Portland's Jackpot! Studios and Tucson's WaveLab Studios and plans to wrap the production at home, with Ante Up Studio's Michael Seifert (GBV, Tori Amos) in November. They're planning for a spring release.

• Singer Jackie Warren will join the Sammy DeLeon Quartet for a special salsa set on Friday, October 26, at Stages (8500 Euclid Avenue, at the Cleveland Play House).

• The Rock and Roll Hall of Fame (One Key Plaza, downtown) will host a Q&A session with prog-emo sci-fi-epic rockers Coheed & Cambria on Tuesday, October 30. Tickets are available exclusively through 92.3-FM K-Rock. If you haven't figured out what "Good Apollo, I'm Burning Star IV" means yet, this is your chance to find out.