On the air, at the clubs, and in the underground, DJ G Spot is the man rappers want to know. 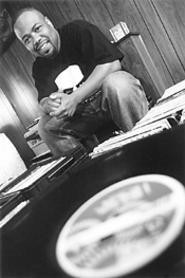 Though his name suggests moaning females and Cinemax after-hours, DJ G Spot mostly just gets busy with his mail carrier these days.

"Me and the UPS guy are very good friends now," he says with a chuckle, gesturing toward a stack of postage labels sitting atop a computer in the basement of his Euclid home. Next to the PC rests a pair of turntables; behind them are more than two dozen crates of wax, from Run DMC to the Nutty Professor soundtrack. Every morning, G Spot comes down to his wood-paneled den to create mixes for radio shows, which he then ships off to a half-dozen cities across the country. He's got a weekly Top 40 rap set in Monterey, California; a neo-soul show in Nashville; and a daily spot in Georgia, for which he bangs out two mixes of old-school hip-hop Monday through Friday.

G Spot has fashioned a nationwide radio profile, but he's also forging a reputation as one of the Midwest's best sources for mix CDs, the homemade compilations of unreleased cuts sold in the hip-hop underground. He cranks out at least one CD a month, and sells more than 1,000 copies of each one at mom-and-pop rap stores nationwide.

In Cleveland, G Spot is a main source for exclusive cuts from rap's biggest stars. He's the guy who first leaked Nas's "Stillmatic" to the airwaves in late 2001, bringing the rapper's feud with Jay-Z to these parts. As we speak on a recent Friday evening, G Spot is pressing a new disc with the highly sought-after cut "Hail Mary," a dis track aimed at Ja Rule that features Eminem, 50 Cent, and Busta Rhymes. Where few mix artists have direct access to rap's biggest stars, G Spot takes meetings with Roc-A-Fella and So So Def, landing new tracks directly from label reps and artists. His AOL in-box is loaded with unreleased material from big names like Foxy Brown, LL Cool J, and Mobb Deep. He gets 10 to 12 every day.

"It started off kind of slow, just getting warm, and now he's on fire," says Quincy Taylor, head of In the Way Marketing, a Cleveland-based hip-hop promotions company that distributes G Spot's mix CDs. "He's one of the top-selling DJs in the area." In addition to the radio gigs and the mix CDs, G Spot emerges from his basement for weekly gigs at Funky Buddha and Spy, as well as twice-weekly sets at Club Electra in Akron.

"Honestly, I don't know where I find the time," G Spot says with a workaholic's sigh. An unassuming, bespectacled 31-year-old, he is more family man than Funkmaster Flex. He lowers his voice the one time he swears -- his daughter and wife are upstairs -- and he talks in the measured tones of a financial advisor, which he was until his radio career took off. The G in his moniker comes from his name, George Martin, a revelation that dashes any notion that he's a closeted ladies' man. Just a mild-mannered dad who works long hours in the cellar.

About the only time G Spot's blood pressure rises is when the subject of his former employer comes up. A native of Chicago who began DJing at his eighth-grade graduation party, G Spot moved to Cleveland in '99 for a position at local hip-hop station WENZ-FM 107.9. He was hired in the promotions department, but by March 2000 he was hosting The 9 O'Clock Mix Show, on which he spun mainstream rap, R&B, reggae, and house six days a week.

And then Scene went and screwed things up. In an article published in January 2002, WENZ's parent company, Radio One, was exposed for its practice of accepting "legal" payola from independent record promoters in exchange for airplay for their artists. G Spot's wife is a promoter for Koch Records, a fact G Spot says made him a target of the company suits.

"My wife being a record rep made Radio One nervous," he says. "They knew about it, but at a time when they were going through controversies and problems, I think they needed to make things easier for themselves. The Scene article was getting fed to the VP of media resources at Radio One -- that was making him make a lot of phone calls to people in Cleveland. Whatever it takes to make this go away, that's what you all need to do."

WENZ made an example out of G Spot, suspending him in January, then firing him in April when he stood by his wife, insisting that she had no influence over the music he played.

"It really kind of lit a fire under my butt," G Spot says. "It kind of hurt me, yet pissed me off. After it all happened, I just kind of sat back and said, 'All right, what am I going to do?' I went on a mix-tape rampage. In a year's time, I think I put out 13 mix tapes. Then people started noticing."

As G Spot's mix-tape career began to take off, his broadcasting opportunities followed. Just after parting ways with WENZ, he was offered a show on KDON in California; a short time later, stations in New York and Rhode Island came calling. The more mixes he made, the more shows he got, and vice versa. Last year, G Spot was nominated for a national Mix Tape Award in New York City. In short order, he had built up his own mix-tape empire, one that came with only one drawback: It's illegal.

"It's hard to have this conversation," G Spot says when the subject turns to the specifics of peddling his wares. When previously unreleased music is leaked to mix DJs like G Spot, it comes courtesy of the rappers themselves or their handlers. Since G Spot's mixes have nothing to do with the artists' labels, and neither the record companies nor the featured artists directly profit from sales of the mixes, the Recording Industry Association of America gets pissed, and has been known to raid and prosecute DJs who engage in the trade. The sheer number of DJs making mixes could be their own best defense against action by the industry.

"The RIAA is saying, 'You're not helping the artists,' but really we are," G Spot asserts. Indeed, mix tapes have become an increasingly important promotional tool in hip-hop. With outlets like radio and MTV becoming too expensive for most artists, mix tapes are a cheap, easy way of building a buzz. The careers of stars like 50 Cent and Fabolous were launched via mix tapes, and Nas's 2001 comeback was the direct result of his appearance on such compilations.

"The mix tape is an excellent tool for promoting new and upcoming artists," says Cleveland hip-hop promoter Tony "X" Franklin. "It's how you get introduced to the next Eminem, the next Nelly, the next 50 Cent. You get a sample of this, that, and the other. It's like going to the salad bar at a restaurant."

G Spot wouldn't know much about that. Other than his club gigs, he doesn't leave the house much. He wakes up at nine every morning, and he's in the basement by ten. He makes mixes until five, then fields phone calls from the many record reps who want to get their artists on his discs and in his DJ sets. By around eight, he's sorting through the new material he received that day or preparing for that night's club gig. That, he says, is where his hours in the basement pay off.

"If you look out from the DJ booth and see everybody on the dance floor, everybody having so much fun, it wins you over," G Spot says. "It's all about them. I'm trying to be the DJ for the people."