Joe Lynch leads the war against the bloodsucking menace. 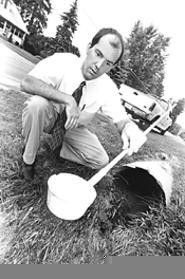 A Euclid resident had called the county to complain about the swarm attacking her patio every evening. Her backyard abuts a steep, wooded slope -- perilously close to the shade and water of Euclid Creek, a mosquito haven.

A county mosquito squad member now chats with the homeowner; two more inspect the creek below. Joe Lynch, the program's manager, arrives on the scene after their work has begun, like a detective ducking under yellow police tape. "You back up against the woods," he tells the woman after surveying the plot. "They just hang out here all day."

Something catches Lynch's eye. He wanders over to a neighbor's yard, where a pile of junk sits under a tree canopy. Lynch toes at the pyre of ladders, plastic flower trays, and birdbaths.

"Hey, Therese, get me a dipper," he yells. Therese, one of Lynch's college-age interns, fetches a rod with a cup at the end. Lynch scoops the water stagnating in a plastic container as if handling a soup ladle. Jackpot.

"I've never seen that many in my life," Lynch says, swirling the contents of the cup. Mosquito eggs float on the surface; larvae swim below. "There could be 50,000 eggs."

Lynch dumps the containers that hold water. No one is home, so Lynch's crew leaves a note on the door, warning the neighbor about rubbish piles and standing water. They will return later to spray. "At least they didn't have a tire, which is typical," Lynch says.

The homeowner offers Lynch and his crew cold drinks, which they decline. Her appreciation is common. Rodent and mosquito control are popular government services, though Lynch wants to be clear: He works for the Board of Health, not the Board of Leisure. His foe is disease transmission, not unwanted guests at patio parties. "Our job is not to allow you to sit on the back porch every night and never get bit by mosquitoes," he says.

Lynch, 35, and his crew of eight work out of a garage in Valley View. Most days, they handle complaints, like the one in Euclid. In between calls, they monitor the mosquito population by setting traps. They lure Culex pipiens -- a.k.a. the northern house mosquito -- with gravid brew, a mix of grass and water that's been left in the sun. The potion is appropriately nicknamed "pig shit." Trapped specimens are counted and sent to Columbus to be tested for viruses.

The county has had a skeeter squad since 1975, the year there were 100 cases of St. Louis encephalitis in the Cleveland area. A handful of residents died. "It's not a nuisance control program -- it's a disease control program," says county Environmental Health Director B.J. Meder Jr.

Lynch isn't a mosquito fetishist. In college, he couldn't picture himself in a cubicle, "pencil in one hand, calculator in the other," so he studied environmental health and took a job with the county nine years ago. This is his third summer chasing mosquitoes, and though peak season isn't until August, he's feeling a touch let down by his adversary. "I'm a little disappointed with our mosquito collection. It's down from last year."

Lynch's hunt took on greater meaning in 1999, when an outbreak of West Nile encephalitis sickened 62 people and killed 7 in New York City. By last October, West Nile had made its way to Erie, Pennsylvania. No cases have been confirmed in Ohio, but the virus is likely here. The county will know for sure by testing dead crows and blue jays, which are more susceptible to the disease. Once infected, one in four humans shows symptoms (fever, stiff neck, sometimes paralysis); it can lead to death among the elderly. "It's not a new mosquito," Lynch says. "It's just a new virus."

Lynch works from a map highlighted with known and potential hot spots. Streamy, wooded Westlake and North Olmsted are traditionally the Transylvanias of Cuyahoga County, but the aging sewer systems in older neighborhoods pose problems as well. After assisting the Euclid woman, Lynch pries open a storm grate on a nearby street. He dunks his dipper into the catch basin and finds three feet of standing water.

Yet shrieking homeowners are often to blame. Lynch takes pleasure in telling residents that they -- and not some exotic plague -- are promoting the scourge by letting water stand or grass clippings mount. "Well, if you dumped over that five-gallon bucket, you wouldn't have 30,000 mosquitoes," he's known to lecture. He also contends with residents whose idea of a folk remedy is to dig a moat and fill it with gasoline.

When a kicked bucket won't do, the county tries to use benign weaponry. Mosquitoes in the larva and pupa stages, for instance, can be snuffed out by coating the water surface with mineral oil, which serves as a trap. Once mosquitoes reach adulthood, however, they can be killed only by spraying a fine mist laced with pesticides from backpack units or trucks.

The EPA says that pesticides pose minimal risks to human health, at least when used properly. But environmentalists wonder what "minimal" means. "The fact of the matter is, a pesticide is a toxic chemical," says Laurel Hopwood of the Northeast Ohio Sierra Club.

Hopwood says the county is better than most at using pesticides judiciously. Still, she questions the balance between the biological threat of West Nile and the chemical harm of pesticides. "We're not talking about a lot of people keeling over and dead from West Nile. We're talking a very small number." Hopwood also wants the county to better publicize sprays by posting street signs, so families -- especially those with asthmatic children -- can shutter their homes.

But Meder says that night spraying makes up only 10 percent of the county's efforts. He remembers the day when crews fired up the malathion trucks at the first slap on the back of the neck. And Lynch says pesticide protesters miss the point when they hang "Don't poison me" signs from their dogs' necks. "We have documented proof that mosquitoes can kill people if they carry a virus."

His morning ends with a visit to a shabby home in Newburgh Heights. A neighbor called about the chlorine-starved pool in the backyard. Water bugs flit about the dirty surface; heaven knows what's at the murky bottom. Lynch walks the circumference and doesn't see any mosquito egg rafts. The pool is the city's problem, not his.

On the drive back, Lynch discusses his foe. "I don't love them or hate them. It's just a challenge. They come back every year.

"Sometimes, though, I think I have a bounty on my head when I walk through the Metroparks with my wife. I am responsible for killing millions of their cousins."