The Mystery of the Tween Demo

Nancy Drew returns for another generation of young consumers. 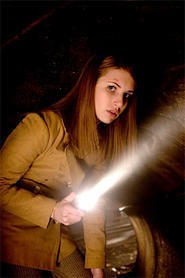 So lame it's . . . cool? Nancy Drew, writer-director Andrew Fleming's attempt to jump-start a new Warner Bros. franchise, is a movie flaunting a most obvious demographic strategy -- a teen flick with a sensibility, or at least sense of humor, that's most definitely parental.

Invented in 1930 by the same Stratemeyer syndicate that gave the world Tom Swift and the Hardy Boys, the bold, intelligent, and well-brought-up Nancy sleuthed her way through some 60 mystery novels -- motoring around the midwestern countryside in a blue roadster, amazing school chums with her perspicuity, and inspiring an international fan base whose self-identified members range from Ruth Bader Ginsburg and Barbara Walters to Fran Lebowitz and Ayaan Hirsi Ali.

An eternal 16 until changes in the motor-vehicles code mandated she turn 18, Nancy lived with a doting father -- Mom having died long before -- and kept company with an equally adoring, somewhat dim beau. The last time Warners brought Nancy to the screen in the person of Bonita Granville, she was a scatterbrained chatterbox; in her current incarnation, played by Emma Roberts (niece of Julia), she's a perky, politely eye-rolling little know-it-all who, although a senior in high school, looks 14 and has the personality of an obnoxious if fearless 12-year-old.

This tweener goddess -- a virtual Batcave of handy accessories packed in her shoulder bag -- may prove too annoying for general audiences, particularly as the deglamorized Roberts plays her comically straight. The movie derives much of its humor from the spectacle of Nancy's single-minded rectitude once she and Dad (Tate Donovan) relocate from River Heights to a spooky old mansion in the Hollywood Hills, where, 25 years before, the star Dehlia Draycott met her mysterious demise. Nancy plunges headlong into that mystery as well as the world of Hollywood High; there, she is the enigma, astounding the resident mean girls with her bulletproof Teflon dweebishness.

But Nancy Drew practices a form of dual address. Jokes like the girl detective's solemn announcement that she "recently discovered movies aren't shot from beginning to end" or casting Mulholland Dr. amnesiac Laura Elena Harring as the resident dead movie star are launched into a void well above the target audience's head. So too is Nancy's pedantic concern with historical anachronism -- especially since she herself is a walking time capsule.

Unavoidably arch, but essentially playful in its wit, the film neither wears out its welcome nor compromises its heroine. Nancy is unstoppable. By the movie's end, her trademark penny loafers and Sandra Dee outfits have been officially pronounced fashionable -- "the new sincerity." That's pretty much the idea of this 12-year-old superheroine, quotation marks and all.