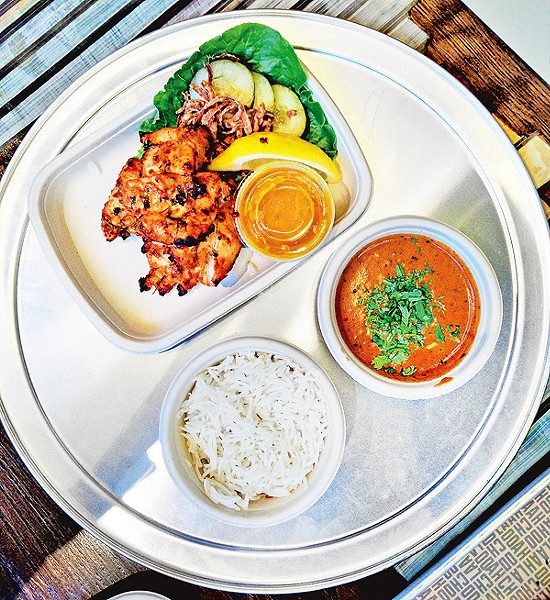 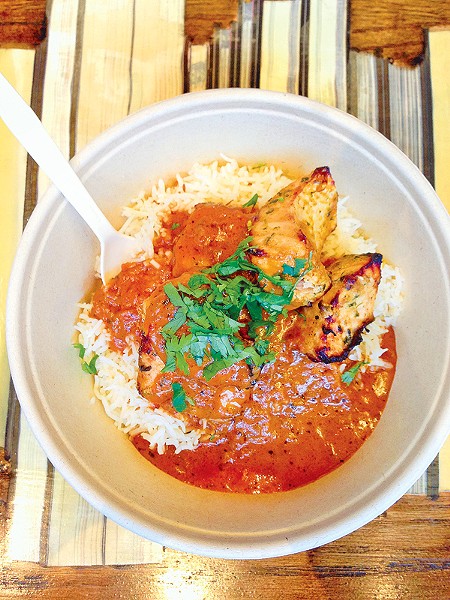 For the past 12 months, those traveling along busy Chagrin Boulevard near the I-271 off-ramp have followed the construction process at Choolaah Indian BBQ. But other than the name, very little was known about the concept. That's because the principals behind the scenes have been quietly at work developing a genre-busting eatery that will revolutionize Indian food in Cleveland — and very likely beyond its borders.

"Our plan is to transform the Indian food experience," explains co-CEO Randhir Sethi. "Our goal is to deliver upscale Indian food using quality ingredients at fast-casual speed and prices."

While everyone else rushes to launch the next "Chipotle version" of this or that cuisine, Sethi and his partners, Raji Sankar and James Nesbitt, started from a very different place, one that places authenticity, freshness and flavor above all else. Food is cooked in tandoor ovens using traditional recipes that are generations old. The result is a cuisine that stays true to its roots, bursting with complex, fragrant and delicious spice characteristics.

"There are lots of Indian restaurants out there that copy the Chipotle method," explains Nesbitt. "But to have fresh food cooked in real tandoor ovens is an audacious goal — and that's what we're taking on."

The dream for Choolaah — a play on a small Indian stove called a chulha — began a decade ago when the team first sat down to write a business plan. In between, the principals, who operate more than a dozen Five Guys locations, watched their franchisor's burger brand mushroom in size. Three years ago, the plan was put into action, with the past 12 months devoted to build-out and countless menu and recipe tweaks.

Whimsically labeled Eeny, Meeny, Miney and Mo, the four beefy, clay-colored tandoor ovens that reside in the center of the open kitchen are the heart and soul of the operation. The cooking technique stretches back thousands of years, and all food prepared in the ovens is traditionally called "Indian barbecue."

"One of the tenets of our mission and vision is the notion of honesty," notes Nesbitt. "That's why the entire kitchen operation is behind glass. We have nothing to hide."

Proteins such as chicken, salmon, lamb meatballs and paneer, made in Amish Country using Choolaah's own recipe, are skewered and plunged deep into the 600-degree ovens. When seared and cooked through, those items are paired with various sauces and sides and served on platters, in bowls, on salads, or in sandwiches. Prices are in the range of $11 to $12 per meal.

During a private tasting, I had the pleasure of sampling almost every menu combination, which is nearly limitless given the different presentations, sauces and sides. Zesty lamb meatballs can be paired with puffy, fresh-baked naan, roasted cauliflower and peas, and tamarind chutney. Marinated chicken can be layered in a bowl with long-grain rice, creamy tikka masala and minty yogurt sauce. Paneer can be paired with flakey wheat roti, lentil soup and spicy mango sauce for a vegetarian meal.

Perhaps the most dramatic menu option is the biryani bowl, prepared the traditional way by steaming together the rice, protein, sauce and spices beneath a naan cap. The diner slices open the dough to reveal a fog of fragrant air and supremely moist contents.

"Nobody does it this way anymore — not even in India," says Sethi. "People think that Indian food is just hot and spicy. The proper use of spice in India is not crazy. Here, a lot is overpowering."

Management spent the past year converting a former Saturn dealership into a sleek and spacious restaurant that can accommodate about 125 guests. A grand staircase and soaring entrance usher in guests, who place their order at the counter, pay and sit down. A buzzer lets them know when their meal is ready. Large color photos depict some of the many possible food combinations, while various charts offer suggested pairings.

The owners know that despite a large and growing demand for Indian cuisine locally and nationally, the food still remains a mystery for a sizeable segment of the dining community.

"We understand that some people might not be familiar with — or may even be intimidated by — the food," says Nesbitt. "The idea is to make it as simple and accessible as possible."

Choolaah accomplishes that by speeding up and modernizing the experience without dumbing down the food. The result is a game-changing concept that promises to introduce Indian food to a brand new market while tastefully and affordably satisfying existing fans.

Look for Choolaah to open in mid-November.