The Next Best Thing

The Watermark works to freshen its image. 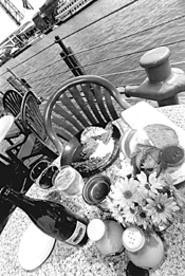 Foodies are a fickle lot, flitting from one new dining room to the next like gypsy moths to stately oaks. For those to whom dining is a passion, what's new is often more important than what's good -- which explains why many worthy restaurants hit the scene with a splash, only to founder once the sense of novelty dissipates. One need look no further than the late Sammy's for a case in point: For the decades when the suave little salon had the upscale, downtown dining scene pretty much to itself, it prospered. But when the Warehouse District exploded, good ol' Sammy's sputtered out.

It's a lesson not lost on savvy restaurateurs. And Hap (père) and Curtis (fils) Gray, the dynamos behind the venerable Watermark on the East Bank of the Flats (almost within spitting distance, as it happens, of the former Sammy's), are nothing if not savvy. Even as the Flats has become the oldest of old news among the trendinistas, the Grays have worked hard to keep their 18-year-old restaurant, settled inside a soaring 1860s warehouse on the banks of the Cuyahoga River, interesting and attractive.

The latest step in the process of continual reinvention found the Grays cutting loose their longtime executive chef, Michelle Gaw, this spring, and installing Curtis, a 1999 graduate of the California Culinary Academy, as top chef and general manager. According to an April press release, the younger Gray came to the table ready to "use the fresh ideas, theories, methods, and practices that he's learned in California and elsewhere to elevate the Watermark to a new level in Cleveland dining."

That being the case, we can only wonder why, during two June visits, nearly everything seemed so ordinary.

It is true that the new menu format is a little unusual, divided into "Small Plates" (appetizers), "Medium Plates" (sandwiches, pastas, ribs, and risotto) and "Big Plates" (main courses, predictably heavy on the seafood). Attentive restaurant-goers will recall, however, that such lingo was in place years earlier at the former, but more authentically novel, Mojo. And they may well ask: Exactly how does calling a shrimp cocktail a "small plate" make it fresher or more au courant?

Oh, never mind. The menu does plow a little new ground when it assigns a code (L, M, or F) to each medium and large plate to indicate the wine style (Light-, Medium-, or Full-bodied) that would best complement it; more detailed varietal descriptions are also offered as a "sidebar" along the right edge of the menu, easing the sometimes confusing process of making an educated wine choice. The helpful info is supported by the restaurant's large, mostly West Coast wine collection, with contents that range from approachable everyday wines, such as Chateau St. Michelle's Johannesburg Riesling ($19 on the wine menu; $10 at our neighborhood Tops), to special-occasion splurges, such as Robert Mondavi's Opus One ($185 on the wine list; mucho dinero on the tippy-top shelf of your local wine boutique). Viniferous options are further expanded by an ample assortment of "by the glass" selections (including four wines from Ohio's own Lake Erie and Grand River appellations), as well as three wine flights and a handful of two-ounce samplers. With depth and breadth like this, it's no wonder that Watermark's wine list has won kudos from Wine Spectator magazine for the past 13 years.

But if the potables were notable, the food coming out of Curtis Gray's kitchen was often run-of-the-mill, with dishes that ranged from good to downright boring. In the later category, poached Prince Edward Island mussels (one of about a dozen new menu items) were decidedly dull, with a slightly fishy funkiness that couldn't be masked by a wash of bland, opaque broth not even savory enough to justify the bother of sopping it up with bread (thick slices of dense rosemary sourdough, incidentally, from Stone Oven bakery, served with a jammy, tomato-based housemade tapenade). A big bowl of creamy New England clam chowder (a Watermark mainstay) was a more flavorful option, with lots of buttery clams and potato bits, but it was marred by an abundance of grit.

A starter of velvety house-smoked rainbow trout, with sheer slices of vanilla-brined onion and a swipe of horseradish cream, made us stop and take notice. But a grilled filet of farm-raised salmon was predictably flat-footed (the farm-raised variety not only posing environmental concerns, but also lacking the full complement of flavor-giving fats that make its wild brethren so rich and juicy), and its small, watery essence was almost completely overcome by the spicy peanut-sauced linguine on which it was bedded.

In fact, even a vegetarian portobello-and-polenta dish edged out the salmon in the flavor sweepstakes. Crisp-edged wedges of soft polenta, silken sautéed spinach, and a thick ribbon of sun-dried tomato aïoli delivered the goodies in this meat-free ensemble, although the oversized mushroom caps hadn't been grilled quite long enough to develop their fullest flavor.

Steak Nicole, another new menu addition, was a more successful dish, pairing two buttery if not especially beefy-tasting tenderloin medallions with succulent grilled shrimp and a mountain of seductively limp French fries, drizzled with savory chive aïoli. And if simply grilled halibut, floating on a cumulus cloud of roasted-garlic mashed potatoes -- their white expanse interrupted by a stack of emerald asparagus spears -- wasn't conceptually fresh, it was at least perfectly executed and brought to the table piping hot.

As with the food, service, had its rough spots. On a weeknight, our tentative waiter approached us so hesitantly and spoke so softly, we might as well have been attended by a wraith; but to his credit, he scared up our food at predictable intervals. Not so a preoccupied Saturday-night server, who took nearly 20 minutes to produce our pre-dinner drink order (and got it wrong, at that), snatched away our apps to make room for our premature salads, and finally disappeared entirely when we were ready to consider sweet endings. Yet we had scarcely picked up our dessert forks to dig into a warm, fudgy Chocolate Lava Cake in a pool of crème Anglaise when he slapped down our bill on the tabletop and rushed off to parts unknown. "Oh, so now he's in a hurry!" a put-upon companion hissed sotto voce.

Issues of food and service notwithstanding, one of Watermark's major assets has always been its riverside location. The restaurant's narrow, brick-paved patio is the perfect spot for enjoying a summery alfresco meal; and when the weather is less accommodating, the glass-enclosed porch makes a charming alternative. And even in the depths of winter, the cavernous dining room (now starting to appear a trifle shabby, with worn carpeting and dated-looking upholstery) offers an entertaining view of the crooked river as it winds its way toward the lake. So on an unseasonably gloomy Thursday evening, while we weren't expecting a crowd, we still were surprised to find ourselves the restaurant's only paying guests when 8:30 rolled around. "This weather is killing us," a bored bartender volunteered, when we commented on the lack of traffic. And indeed, with crusty old recordings of "New York, New York" and the Peanuts theme playing in the background, the ambiance seemed as dead and dispiriting as the endless rain.

But two days later, on a perfect Saturday evening, as soft breezes wafted down from a cloudless sky, the restaurant was still half-empty, and that truth leads us right back to the Watermark's urgency about crafting a sexy new identity. Consistently great food and gracious service would be a fine start, of course. Let's hope that Hap and Curtis Gray prove to have the will -- and the talent -- to see it through.