They call her SheBron. She's 12 years old. And she's set to jump from middle school to the WNBA. 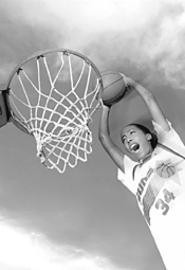 Whenever super-scout Bob Gibbons is in St. Louis, he makes a point of picking the brain of longtime Savvis Center security guard Jesse Whitaker, a 64-year-old hoop junkie regarded by insiders as a living tote board when it comes to spotting talent on St. Louis playgrounds. Whitaker, after all, was among the first to recognize such blacktop prodigies as Darius Miles, Larry Hughes, and Jahidi White -- all of whom went on to the NBA.

But when Gibbons recently staked out the Dr. Martin Luther King Jr. Basketball Shootout, a premier high school tournament at the Savvis, he was concerned that his friend's age had finally caught up to him.

"Gibby, you heard about SheBron?" the guard asked Gibbons.

SheBron is one Sheila Bronson of nearby Alton, Illinois. According to Whitaker, she could be found running circles around the cream of the region's best teenage boys on any given Sunday at Salu Park in Alton, one of the nation's toughest stretches of hoop blacktop.

Skeptical, but well aware of the park's legend, Gibbons agreed to meet Whitaker at Salu. When he arrived at the playground on an uncharacteristically balmy February afternoon, he found Whitaker there in his Sunday best, already engrossed in the SheBron show.

"This here is history in the making," said Whitaker, pointing at the sleek, 6-foot-2 Bronson, as she pulled a rebound and snapped a crisp outlet pass. "And I ain't missin' one goddamned second of it."

What Gibbons soon witnessed was a stunning combination of quickness, leaping ability, and athleticism -- all packed into a prematurely tall 12-year-old girl. In one quick span, Gibbons watched amazed as Bronson drained a shot from three-point range, stole the ball from Lisch, then soared over the 6-foot-8 Grimes to nab an offensive board, slamming the rock home forcefully with two hands. It was a display of intensity -- of hoops instincts -- that Gibbons rarely sees in the nation's best prep ballers, let alone a middle school girl.

"SheBron's the truth, and can't no one handle it," says Whitaker.

Later that afternoon, as she lounges in her Alton living room, Sheila Bronson proves far more humble. "I'm blessed to be able to play basketball this well; God gave me a gift, and it's my job to use it," she says, her soft voice sharply contradicting her ferocious floor game. "I'm also lucky to have a mom who's such a good teacher. There is no way I'd be able to live my dreams without my mom making me practice math and reading every day. There are some things that are more important than basketball -- that's what she tells me. And she's right."

But according to her mother, Terry Bronson, Sheila is being far too modest. Mom proudly notes that her daughter is also an accomplished cellist and has a history of routing her peers in rec department science fairs. Better yet, she has a good heart: Terry speaks at length of how her daughter routinely visits a nearby preschool to play with the handicapped children.

Unfortunately, society doesn't tend to celebrate promising young scholars. It does -- as we learned from LeBron James -- place a premium on roundball prodigies. And to anyone who's seen her play, SheBron definitely has game.

To put her ability in proper perspective, it is worth noting that only a handful of women have ever dunked in a game at any level, with 6-foot-5 Los Angeles Sparks center Lisa Leslie becoming the first WNBA player to slam one home in 2002. While the crowd went bananas, Leslie's dunk was decidedly pedestrian: The svelte center barely nudged the ball up and over the rim. SheBron, by contrast, has been known to stun -- and embarrass -- top high school opponents with one-handed tomahawk slams.

The Illinois State Scholastic Basketball Association prohibits girls from competing in school-sponsored boys' leagues. But with a special exemption, the Amateur Athletic Union (AAU) allowed Sheila to play in a select ninth-grade boys' league last summer. She was named MVP -- and averaged four dunks per game. Videotapes of her AAU battles with the boys show her as nothing short of dominant.

Gibbons, revered nationwide as the dean of college basketball recruiting with his All-Star Report, first thought Sheila was an elaborate ruse. Whitaker, a known jokester, has some serious hoop connections. It wouldn't be beyond his character to truck in a WNBA All-Star to fool Gibbons.

But the game at Salu made Gibbons a true believer -- especially after Terry Bronson provided the wary recruiter with a birth certificate proving that her daughter was indeed 12. Gibbons now thinks Sheila can go straight from middle school to the WNBA.

"I've been wondering what was going to happen after LeBron James," says Gibbons. "The question has been answered with SheBron. It seemed unimaginable to me that there could be any person who could come anywhere near him. And then, suddenly, here comes a girl who's 12 years old, who may defy all odds, totally revolutionizing the sport by becoming the first girl to skip high school and go straight to the WNBA. There've been guys who've skipped college, obviously, but no one has gone pro without attending high school."

Moreover, SheBron may be in the ideal position to do it. She is being home-schooled by her mother and expects to earn her high school equivalency by age 14, if not sooner. Citing her daughter's height and intellect as compelling factors, Terry has also petitioned Illinois Secretary of State Jesse White, who oversees the State's Drivers Services Department, to grant Sheila an age exemption so that she can earn her driver's license at age 13. She'll need to transport herself when she reaches the pro circuit. Both mother and daughter say Sheila intends to declare herself eligible for the WNBA draft at age 14.

Gibbons knows how tough it will be for her to make that leap. It's already proved tough on the other side of the gender line. He also knows that for every Amare Stoudemire and Kobe Bryant, there are two dozen Bill Willoughbys -- high school studs whose surefire-star labels give way to underdeveloped fundamentals and brash immaturity by the time they reach the pros, if they're even lucky enough to get there.

At the MLK tourney, Gibbons watched East St. Louis's Liddell nearly outscore perennial state power Vashon's entire team in a bragging rights rout. The wiry, 6-foot-5 Liddell, with his point-guard floor vision and wombat-like defense, was everything Gibbons had heard about and more.

Yet Gibbons's gut gives him pause.

"Tommie's got enough talent to be a fine college player, but he's got to hit the weights if he wants to play in the league [the NBA]," says Gibbons. "Nowadays, it's not enough to just be able to play. You have to have pipes. LeBron James has pipes."

He has no such reservations about Sheila Bronson and the WNBA.

"SheBron has pipes," he says. "With her intensity, I could see her developing into a female Tracy McGrady, only with Ben Wallace's physicality. Think about it: She's 12, she's already 6-2, and she's extraordinarily agile. The genetic possibilities are limitless."

"It is clear that she has athletic ability that no female athlete before her has ever approached," says Melvin, whose service focuses on Illinois talent. "I am convinced that, with the proper coaching and work ethic on her part, we are looking at the first crossover athlete. If she continues to work and learn the game, this young lady will be more dominant in women's basketball than Venus and Serena Williams are in women's tennis. I believe her ceiling could well be the NBA."

Telep, who's based in Durham, North Carolina, concurs. "She'll be a max contract player in the WNBA by the time she's 18. There's no question she could play in the NBA. They say Europeans are soft. Well, she's no European."

Not unexpectedly, shoe and apparel companies have already begun lining up to throw money at the 12-year-old revolutionary.

"Michael Jordan and Tiger Woods will always be amazing pitchmen, but SheBron is the real deal -- a marketer's dream come true," says John Lundquist of Double Team Sports Marketing in Chicago. "She takes girl power to levels that I don't think any of us thought possible."

Like LeBron James with his infamous Hummer, the Bronsons have a nice car in their driveway -- a gift from SheBron's uncle, Alton Lister, the 7-foot former NBA center who, while serving as one-third of the Milwaukee Bucks' three-headed pivot with Paul Mokeski and Randy Breuer in the mid-'80s, was dubbed "Alton Listless." Terry Bronson is Lister's sister.

But it is unwise to suggest that Lister's unfulfilled promise may provide a cautionary tale for Sheila. The Bronsons construe any criticism of Lister's career as a personal slight against the family. It also fuels SheBron's competitive drive.

SheBron has a similarly unflattering impression of Leslie, the WNBA's reigning MVP.

"She's tall and is a pretty good shooter, but she doesn't have many muscles and doesn't dunk a lot," says SheBron in a quiet voice. "What I'd really like is to play against Ben Wallace. Maybe one day I'll be able to jump over his huge afro."

Super-scout Gibbons isn't counting it out.

"If her growth pattern reaches 6-10 (which doctors are predicting) and her body continues to have muscular definition, then the unimaginable will truly happen -- a woman in the NBA. As Paul Harvey would say: Stay tuned, America."